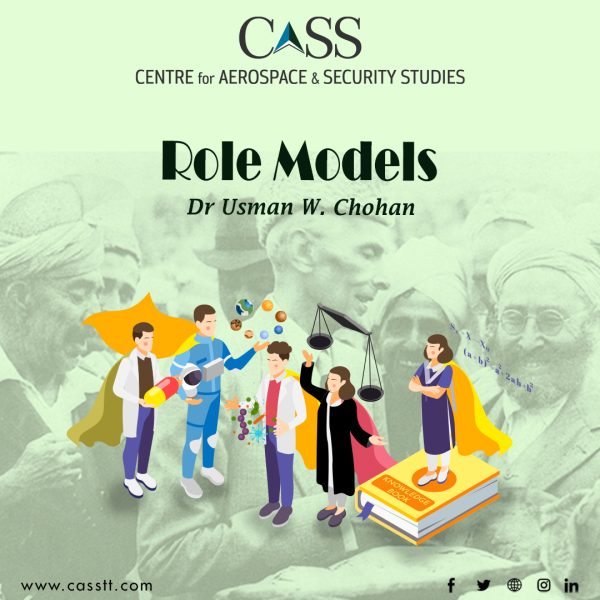 It is difficult to understate the importance of role models in the cultivation of superior conduct among ordinary people, and in the mobilization of society towards common goals. A recent seminar by the Centre for Aerospace and Security Studies (CASS) to commemorate the birthday of Quaid-e-Azam arrived at the very same conclusion after an enriching, lengthy discussion that sought to contextualize the vision of the Quaid in a contemporary light. It was concluded that, through the emulation of exemplars like the Quaid, new generations could engage in the necessary self-improvement that would best reflect their potential and their purpose in carrying forward positive values.

In CASS’s seminar on the Quaid, many audience-members lamented that there was a dearth of good role models to whom the younger generation could turn. It was felt that, for their part, the younger generation faces an onslaught of alluring but ultimately counterproductive messaging through social media and other sources. This observation is not novel per se, since one used to criticize MySpace for the same reason two decades ago, MTV two decades before that, and so on.

However, the notion that good role models are absent from our present-day milieu is a viscerally-felt observation. Our political class continues its infighting, our bureaucratic structures are mired in inertia, and most spheres are rife with nepotism and mediocrity. There is thus a pressing need for strong positive role models to exemplify superior values among generations, and such inculcation has not just long-term but also very immediate effects.

A recent study by Emma Riley in the Review of Economics and Statistics on the importance of role models illustrates this elegantly. She segregated two groups of schoolchildren in Uganda, one of which watched the inspirational movie Queen of Katwe, while the other acted as a control group. The Queen of Katwe portrays Phiona Mutesi, a young Ugandan girl of few means but who, through intense personal effort and dedication, rises to become a world chess prodigy that successfully competes in international chess tournaments, despite her humble means and the lack of an enabling or encouraging environment. In Riley’s experiment, exposure to the inspiring film before taking a difficult national-level  exam found statistically significant results.

According to Riley’s findings, students who watched the film before taking the national exam were found to perform better, especially in maths subjects, and the largest effect for female students. Children in the experimental group, which viewed the film, saw a simultaneously inspiring and realistic role model in Phiona Mutesi, and just watching a movie with a good role model could exert a positive and immediate influence on young people, in terms of better grades on a test. Given the robust indications of such improvements on youth, should we not seek to highlight the work of good role models for our young generation?

It is worth noting that there are a great many persons of noble character, both in Pakistan and around the world, who work tirelessly and impressively, but do so unnoticed by society. In this country, they work in a relative seclusion from the media’s attention or the public’s gaze, and they also span a wide range of fields, including: medicine, IT, telecom, defense, engineering, law, public security, diplomacy, education, social services, environment, scientific research, construction, and many more. Because of their comparative remoteness from the public square, younger generations are not benefiting from the aura of these exemplars, at least not at a sufficient scale.

But why do the profiles of such people not garner as much attention? Perhaps it is because they are not controversial, and media narratives thrive on controversy. It is also perhaps because they are not attention-seekers themselves, finding more value in quiet but gratifying personal effort. It may also be because, as has been the trend elsewhere in the world, negativity espouses more public response, and such people shun negativity in their pursuit of higher attainments. They are thus not as prominent in the public eye, but they would, no doubt, serve as better role models for the youth than what social media algorithms and mainstream media coverage are seeking to offer.

Commemorating the legacy of Quaid-e-Azam offers us an opportunity to pay homage to a man of deep introspection, vision, integrity, and commitment. We owe him a debt that we cannot directly pay. But by disseminating the achievements of positive role models to our youth, we can indirectly repay our debt to the Quaid, in fostering a more excellent generation to blossom ahead.

Dr Usman W. Chohan is the Director for Economic Affairs and National Development at the Centre for Aerospace & Security Studies (CASS), Islamabad, Pakistan. He can be reached at dir.econ@casstt.com.