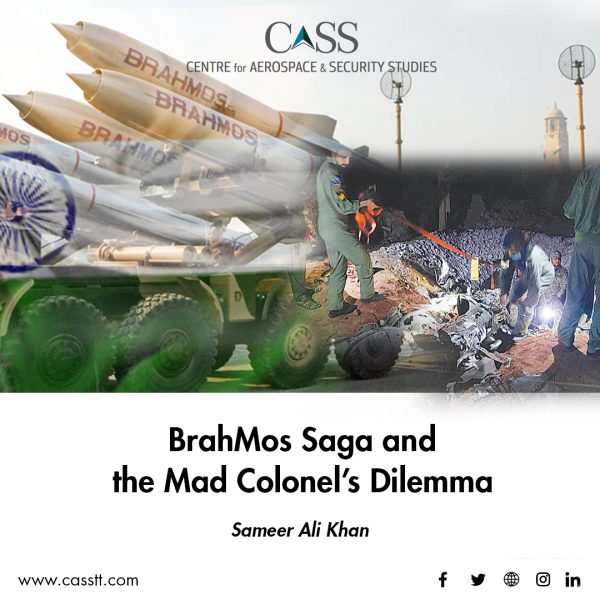 Nearly six months later, on 23 August 2022, the Indian Air Force (IAF) sacked three officers, it claims were responsible for the incident. The senior most responsible person was reportedly a Group Captain. The court of inquiry concluded that ‘deviation from the Standard Operating Procedures (SOPs) by three officers led to the accidental firing of the missile.’

Analysts have pointed out the obvious shift in Indian position from declaring it a ‘technical malfunction’ to now concluding that it was the result of deviation from SOPs. It has been suggested that the earlier position of ‘technical malfunction’ could affect not only Indian export potential for the missile system but also dent Russian credibility as the leading exporter of military hardware.

Involvement of the IAF and BrahMos is an interesting case. The question, ‘whether BrahMos is a nuclear capable missile system or not,’ has close linkages with the IAF. In 2017, India’s Strategic Forces Command (SFC) started receiving Su-30MKI aircraft modified to carry BrahMos air-launched cruise missiles. The Indian SFC is responsible for operationalising India’s Nuclear Command Authority (NCA) orders – including employment of nuclear weapons.

This supports the fact that BrahMos is a dual capable – if not solely a nuclear capable – missile system. The Indian government’s ambivalence is understandable given the fact that it would raise questions about Russia’s compliance with the Treaty on the Non-Proliferation of Nuclear Weapons (NPT) and Missile Technology Control Regime (MTCR) obligations. Analysts point out that India has the capability to arm BrahMos with nuclear weapons should it choose to do so.

The incident also raises questions about India’s Nuclear Command and Control (NC2). There are two NC2 arrangements that states can adopt. One, a centralised system where political leadership retains nuclear use authority; and two, a decentralised system where authority is delegated to military operators. India maintains that it has a centralised C2 system with its NCA’s Political Council (headed by the Prime Minister) retaining sole authority on nuclear use. Such an arrangement is often bolstered by a mix of software (administrative arrangements like SOPs, code management and two-man rule etc.) and hardware (physical measures that prevent unauthorised use). A centralised C2 system can be further supported by keeping nuclear warheads and delivery systems de-mated or even storing the two at separate locations. If the weapons are mated with the delivery systems, hardware like Permissive Action Links (PALs) ensure that a weapon is not used without authorisation.

The fact that, fortunately, this BrahMos missile was unarmed, obviates the need for PALs. However, the accident points to the disturbing possibility of the mad colonel’s dilemma at play – where a rogue officer takes unauthorised actions. At the next tier, it depicts a failure of the two-man rule (now referred to as two (or more) person rule). Not one or two, but three officers violated the SOPs without a single one of them either reporting to higher authorities or disassociating himself. This reflects poorly on India’s Human and Personnel Reliability Programmes (HRP & PRP, respectively) – if there are any in place.

Questionable effectiveness of India’s administrative arrangements (like two-person rule) is a cause of concern as its nuclear forces incorporate canisterised missiles (where nuclear warheads are mated with the delivery systems). Similar concerns extend to sea-based Indian nuclear forces because Submarine Launched Ballistic Missiles (SLBMs) are already mated with nuclear warheads, do not incorporate use controls like PALs, and rely mostly on administrative arrangements.

‘At the heart of nuclear command and control lies the always/never dilemma’, i.e., nuclear weapons should always work when required and never be used without legitimate authorisation. While a centralised C2 helps overcome the ‘never’ part, a decentralised C2 supports the ‘always’ side of the dilemma.

NC2 systems are never absolutely centralised or decentralised in perpetuity. Depending upon the prevailing environment, they tilt to one side or the other. During times of heightened tensions, the balance is likely to tilt towards assuring the always side of the dilemma – thereby, increasing the chances of unauthorised use, manifold.

Luckily, this accident occurred at a time of lower tensions. Analysts have pointed out how it could have taken an ugly turn in an environment like Pulwama-Balakot crisis. The latest episode had a ‘fail safe’ outcome, but with greater readiness of Indian nuclear forces, ‘fail deadly’ scenarios cannot be ruled out in times of crises.

Of the multiple worrisome aspects, one is that the inquiry was headed by a two-star general – only two ranks above the leading responsible officer. Since this incident involved another antagonistic nuclear-armed state, it deserved a higher-level political inquiry involving the tri-services SFC. It should have prompted a re-evaluation of the systems in place across all tiers of the Indian nuclear triad rather than dealt as business as usual. If the situation had to be dispensed at such a tactical level, the inquiry could have been concluded much earlier.

For Pakistan, this outcome cannot be reassuring. In a future high-tension environment, Pakistan will have to factor in the possibility of similar accidents on the Indian side while also catering for eventualities of ‘splendid first strikes.’