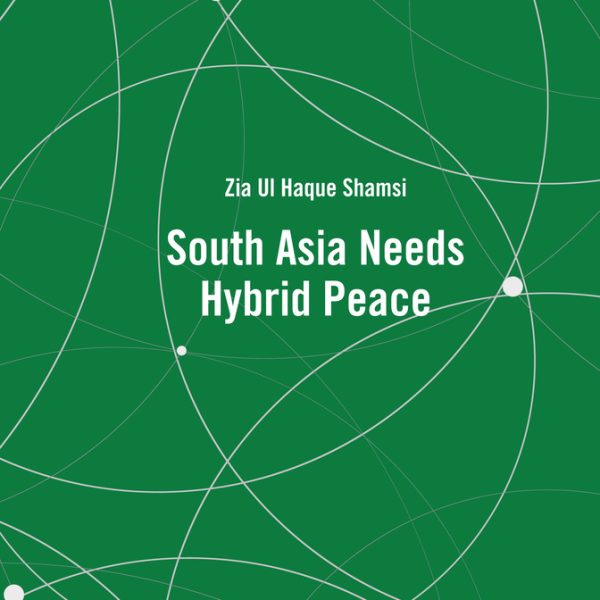 The South Asian region has been marred by turbulence and instability. The perpetual Indo-Pak rivalry, presence of nuclear weapons, and persistent instability in Afghanistan have further exacerbated existing tensions. The book South Asia Needs Hybrid Peace is a recent take on regional dynamics authored by Dr Zia Ul Haque Shamsi.

In 98 pages, the author draws attention to the importance of maintaining peace in South Asia, vis-à-vis Indo-Pak relations and proposes various mechanisms in this regard. The book comprises three parts. In the first chapter, the author briefly discusses Indo-Pak rivalry. He underscores the importance and need of harnessing hybrid peace between the arch-rivals. the author refers to hybrid peace as observance of mutual respect, productive engagement, accommodation for views, adjustment for religio-cultural leanings, space for common interests and urge for peaceful coexistence (p. 4). To meet these ends, he proposes constructive engagement, conflict resolution, economic cooperation, information sharing, and sociocultural cooperation. The second chapter is focused on peace and stability in Afghanistan. Dr Shamsi comprehensively highlights the significance of Afghanistan in the region. He suggests that the regional players should collectively play their due role in lifting Afghanistan for the development of the region itself. In the last chapter of the book, the author explores the potential role of South Asian Association for Regional Co-operation (SAARC) in promoting hybrid peace in South Asia. He lists various areas where SAARC can act as an effective platform for the betterment of the region.

Traditionally, there is more focus on hybrid war in South Asian literature, given the entrenched complexities of the region. Conversely, Dr Shamsi has advocated for nurturing hybrid peace in South Asia. The book is an interesting read to understand the bitter regional realities. He aptly confers that the enduring Indo-Pak rivalry has taken the largest toll on peace and prosperity of the individuals living in both states. The assertions made are backed by figures which strengthen the given arguments. The core strength of the book is that it has offered a new perspective and approach for India and Pakistan to recalibrate their existing perceptions, resume bilateral relations and lessen previous hostilities for their own good. In a very engaging style, it has been emphasised that the two states need to learn to live with multiple disputes rather than being bent on resolving each and every one of them.

With the current deadlock existing between the two states, the book is a timely contribution.  It is concise yet rich in content. It is easy to read given that it is well-structured, uses simple vocabulary, and is devoid of unnecessary details. It is very encouraging to read a viewpoint that offers a new approach for the arch-rivals. In terms of policymaking, this book provides valuable insights for the leadership of both countries. It demands that it is high time that a hybrid approach is employed to restore confidence and rebuild relations that are mutually beneficial and sustainable. These steps will benefit people rather than the interests of any particular segment.

The concept given by the author needs to be promoted at the highest levels. However, one limitation of the book is that the recommendations are viable provided the stakeholders are convinced to execute the required decisions as stated by the author himself. The mentioned recommendations demand bold and meaningful diplomacy by leadership from both sides. The fact remains that Indian leadership is too reluctant to engage with Pakistan. Although Pakistan has tried to reach out to India multiple times, the gesture has not been reciprocated. The main reason for such arrogance is the strong foothold of the Bharatiya Janata Party (BJP) in Indian politics. Engagement with Pakistan does not appeal to its electoral base. With the absence of a strong opposition in Indian politics, the BJP has the space to avert any sort of engagement with Pakistan and it will likely do so. Similarly, stability in Afghanistan is not on India’s priority list as it is seen as an instrumental factor in promoting unrest in Pakistan. Likewise, the likelihood of SAARC playing any constructive and meaningful role appear dim, given the prevalent mistrust. In such circumstances, the concept of ‘hybrid peace’ becoming a reality does not appear very bright in the near future.

It is also pertinent to mention that there is another book by the author titled ‘Nuclear Deterrence and Conflict Management between India and Pakistan’ written on the same lines comprehensively covering important events that shaped Indo-Pak relations. It will be helpful to read it prior to reading this book to have a thorough and chronological overview of the evolution of the bilateral relations from independence till the Balakot strikes.

Overall, the book is an excellent and unique take on the current political environment of South Asia. It is recommended to South Asian experts and students of International Relations who want to develop regional expertise. It will be beneficial for those who are interested in viewing Indo-Pak relations from a new lens. It will be equally valuable for the policymakers of both countries to understand the importance of constructive engagement between the two states and assess their decision-making styles accordingly. Most importantly, it is recommended to citizens of India and Pakistan to have a better understanding of a rivalry that adversely impacts their daily lives.

Shaza Arif is a Researcher at the Centre for Aerospace & Security Studies (CASS), Islamabad, Pakistan.

According to a study, the average human being spends around 90,000 hours of life at work. Hence, it is important to understand how the work
185 views