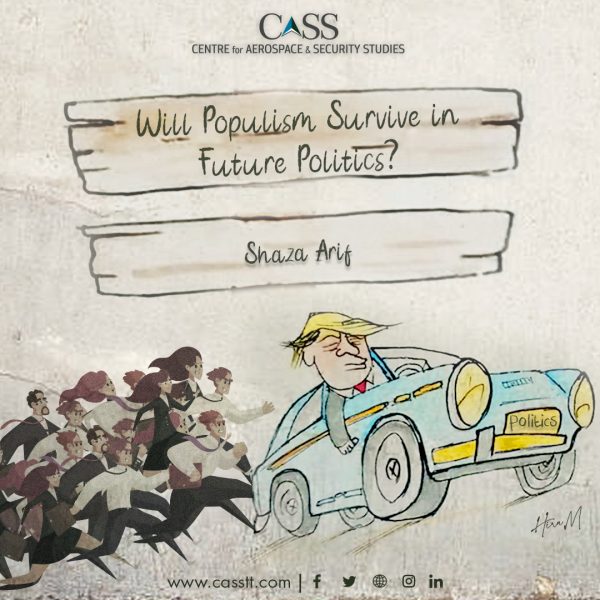 During the Cold War, the world was divided between two distinct and very conflicting ideologies: Capitalism and Communism. The fall of the Soviet Union left a political vacuum in the world order. This vacuum paved the way for the rise of populism. In addition, the inability of traditional political parties, politicians, and their often conventional and rather lacklustre policies to address novel problems that have emerged in this century further strengthened this phenomenon. In fact, a wave of populism swept the world in the last two decades and has left a notable mark on the political landscape. The emergence of leaders who opposed the ‘corrupt elite’, expressed their intent to break the statuesque, and positioned themselves as the only ‘hope’ for the country’, gained much support over time. Citizens of the developed and developing world were equally impressed by the calls of such populists. They put faith in them, as witnessed by the establishment of populist governments in various parts of the world, including the United States of America, Europe, and Asia. From ‘Making America Great Again’, leaving EU via ‘Brexit’, ‘ Changing Density of Brazil’  to ‘Reviving Hindutva’, various shades and facets of populism were witnessed.

However, more recently, it was argued that perhaps populism was losing its appeal. The most notable fall of populist leaders was witnessed in 2020 when US President Donald Trump lost his re-election bid against Democrat Joe Biden. Populist regimes in Europe also lost power in the Czech Republic, Bulgaria, and Moldova. Similarly, the most recent debacle occurred in Great Britain. Prime Minister Boris Johnson, often tagged as Britain’s Trump, was removed from office. After serving for nearly three years, he was forced to resign after the Tories revolted against his leadership style and Cabinet resignations started pouring in one after the other. The fall of these notable populist leaders from power raises questions about the future trends of populism.

So, is populism dying its own death? Or does it have the potential to bounce back with renewed momentum?

Despite the number of populist regimes shrinking (most notably in Europe), the trend does not suggest populism is on the retreat. These leaders may have been removed from power or lost elections, but populists will remain relevant in mainstream politics as they still enjoy considerable support from the masses. The intensity of the support may vary at times, but populism will remain active in various regions and continue to re-emerge in new shapes and forms, especially where such movements are pushing for more political engagement of citizens and challenging the contours of traditional politics with assertiveness. And as far as populist leaders and their strategies are concerned, they will continue to adhere to themes/issues that easily attract or appeal to the public. The themes often pushed by such leaders (especially in the West) usually include hyper-nationalism, racial superiority, restrictive trade, and strict immigration policies. On the other hand, leaders of developing countries use the economic plight of citizens and ethno-religious chauvinism to their advantage.

Interestingly, in developed countries, it is relatively easier for political parties to counter populist movements if they adopt some populist tendencies, such as imposing strict immigration policies and restrictive trade policies/tariffs, etc. Secondly, if the economy is on the right track, it also provides some space for mainstream parties to restore peoples’ faith in them. However, rising inflation worldwide due to COVID-19 and the ongoing war between Russia and Ukraine is impairing the economic atmosphere, making conditions more suitable for populism to re-emerge. Hence, one cannot rule out the return of Donald Trump in the 2024 elections. Similarly, the possibility of more populist movements in Europe remains high.

In this regard, the atmosphere in developing countries is also fairly ripe for populist movements. Entrenched in economic and social problems, leaders who claim to be the peoples’ voice or project the ‘Thy Saviour’ mantra are readily accepted by a large segment of society hoping for change. Here, ethnic and religious divisions can also be exploited more easily. The major case study in this regard is India where ‘Hindutva’ is influencing Indian politics and society under Prime Minister Narendra Modi. Moreover, the challenges developing countries face are usually due to underlying structural problems, further strengthening populism. It is pertinent to mention that in developing countries, support of the intelligentsia is crucial for one’s rise to power.

The real challenge for populists, in both developed and developing states, arises when they actually assume power. The greatest strength of populists is bringing, hence far, marginalised problems into the limelight and stirring debate in the public and media. Conversely, their weakness often is not having concrete strategies to solve those same problems or even existing visible ones once they enter the corridors of power. Absence of practical policy frameworks, lack of an experienced team, understanding of public/state governance or institutional limitations often impede their performance.

Despite such hurdles, populism (and by extension populist leaders) will continue to thrive since it is driven by emotion rather than reason and logic. In fact, the world has entered a populist era. It has been tested in North America, Latin America, European and Asian countries and will certainly be tried in other regions as well. Hence, as opposed to populism losing ground, it is likely that it will continue to exist in global politics and remain a defining element of the 21st Century.

Shaza Arif is a Researcher at the Centre for Aerospace & Security Studies (CASS), Islamabad, Pakistan. The article was first published in Modern Diplomacy. She can be reached at cass.thinkers@gmail.com.