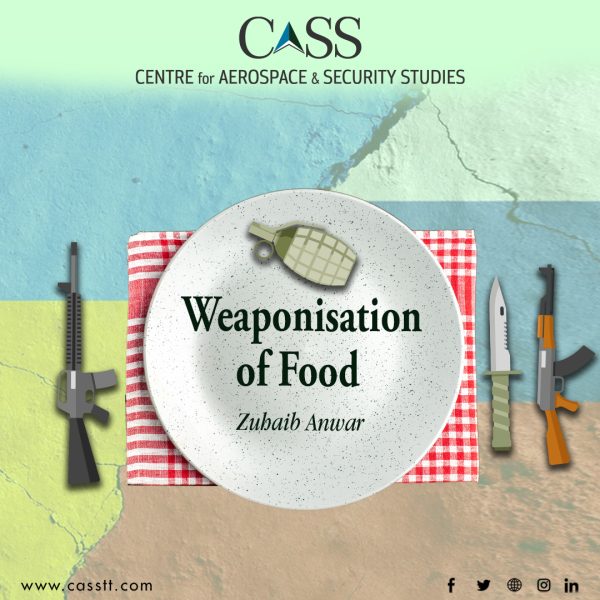 The world has become increasingly anarchic given how weaponising available resources to achieve one’s interests has become a norm. While dual-use technologies like Artificial Intelligence and space technologies are being adapted for use in the military domain; weaponisation of natural resources, especially food is inhuman. During the ongoing Russia-Ukraine conflict, one of the most talked about subject has been the use of ‘food’ as a weapon.

The Universal Declaration of Human Rights (1948) recognised the right to food as fundamental for basic standard of living. The same right is also preserved in the International Covenant on Economic, Social and Cultural Rights (1966). Different state constitutions also safeguard basic human rights, including access to food. Despite all the formal national and international arrangements guaranteeing the right to food, many states blatantly violate this principle, with the world’s leading powers being prominent culprits.

Historically, many countries have used food as a diplomatic tool or a weapon. The United States (US) itself (being one of the largest food producers in the world), has on many occasions, used food aid/embargo to achieve its geopolitical or economic goals. In fact, the former US Secretary of State Henry Kissinger once said, ‘Who controls the food supply, controls the people.’ Similarly, Earl Butz, who was Secretary of Agriculture in the Richard Nixon and Gerald Ford administrations, publically said that ‘Food is a weapon. It is now one of the principal tools in our negotiating kit.’ Similarly, John Block, Butz’s successor said in 1980, ‘I believe food is the greatest weapon we have.’ These statements manifest that the US has been using food (by manipulating its supply) as a tool to force other states to submit to its terms. It has done so on many occasions, e.g., on one occasion, the US stopped food and other aid items to Chile to create instability and overthrow Salvador Allende’s government. There are many similar examples of US exploitation in history.

In the ongoing Russia-Ukraine conflict, Russia is being criticised for weaponising food. Western media claims that Russian forces purposefully attacked non-military targets, particularly the agriculture sector of Ukraine, hitting grain terminals, destroying food silos, and damaging croplands.  Similarly, the Russian blockade of key Ukrainian ports, used for the export of grain and other commodities, led to a worldwide fear that the war would lead to a global food crisis since Ukraine is amongst the major producers and exporters of wheat, sunflower oil and corn.

The US and its allies have condemned Russia for its use of food as a tool to coerce Ukraine and the world at large and attempt to end the war on grounds favourable to Russia. Antony Blinken, the US Secretary of State blamed Russia for (reportedly) exposing 49 million people to starvation and acute hunger. Western media alleges that following Moscow’s invasion of Ukraine and blockading of Ukrainian ports (e.g. the port of Odesa), prices of grain, cooking oil, and other basic commodities have skyrocketed because Ukrainian ships full of wheat and sunflower seeds are stopped from leaving the harbour. Whereas Russia blames Western sanctions for the price hike of food items.

It is an irony that both countries involved in the conflict are amongst the largest exporters of grain. In 2021, Russia exported 32.9 million tonnes of wheat and meslin (a mixture of wheat and rye) to 95 countries around the world. Similarly, Ukraine last year exported 20 million tonnes of wheat to different countries, including Pakistan. With Western sanctions on Russia and Russian blockade of Ukraine last year, regions dependent upon grain imports from these two countries including the Middle East, Africa, and Asia (to some extent) face food scarcity and/or rising food prices. In these regions, food insecurity has led to socio-political upheaval and many governments had to provide food subsidies to avoid instability. The reduction in food supply and price hikes can make it more difficult for these countries to avoid socioeconomic instability.

It is, therefore, imperative for all states to end the practice of using food to manipulate or coerce the behaviour of other/opposing states, groups or communities. This situation, coupled with the already existing threats to the food cycle, including climate change, the economic impact of COVID-19, etc. is making the situation worse for developing and underdeveloped countries dependent on wheat imports.

Organisations like the Food and Agriculture Organization (FAO), World Food Programme (WFP) and International Fund for Agricultural Development (IFAD), linked with the United Nations, need to protect and promote food security, particularly in developing and underdeveloped countries. The international community should either establish a global convention for the protection of food supply or create a universal food reserve to deal with food crises triggered by interstate or global conflicts. Similarly, there is a dire need of robust implementation of International Humanitarian Law that makes it mandatory on states to ensure sufficient food availability and access and its related infrastructure during conflicts, war and/or any natural/unnatural calamities.

Zuhaib Anwar is a Research Assistant at the Centre for Aerospace & Security Studies (CASS), Islamabad, Pakistan. He can be reached at cass.thinkers@casstt.com