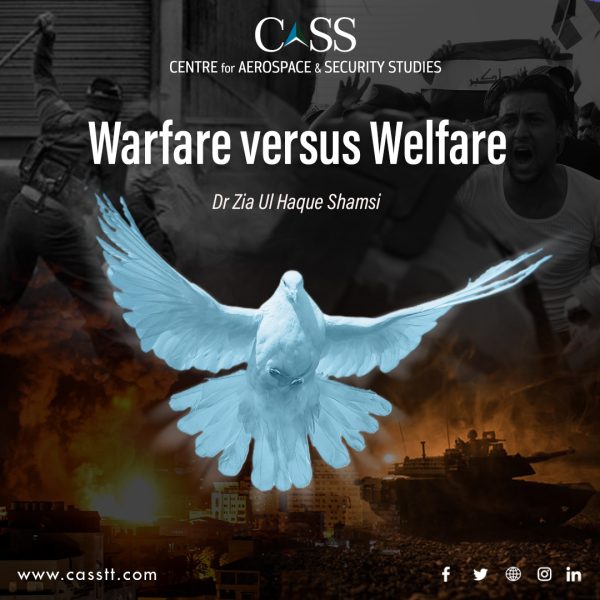 Trust me, I am not initiating a debate between the realists and the liberalists or the idealists–yet again. Just thinking that similar-looking words, nearly the same sound and spellings, can have such different connotations for the human being. Unbelievable! Since I did not see these two varied words together in the literature unless I totally missed it, I thought it may trigger a debate among academics to rethink realism, but with realism.

The title might cause some discomfort to the hawks who continue to blindly follow the tenets of classical realism, which thrives on the state, power, and security mantra. The reasons are obvious: wars and conflicts suit Military Industrial Complex (MIC) owned by the developed world. The developing nations are left with no choice but to invest in security apparatus, beyond their capacity and at the cost of development, growth, and well-being of their people.

Both these concepts are as old as the history of mankind. In many places in the Holy Books, the Creator has mentioned the greedy nature of human beings, primarily to test its nature, makeup, intent, and capacity. In the same vein, the Creator also guides the human being on the significance of the welfare of the needy, neighbours, poor relatives, and even the Prisoners of War (POWs). Whereas the majority of human beings would vote for the concept of welfare as the saviour of this planet earth from impending disaster, unfortunately, they may not matter in the decision-making matrix.

Briefly, there are numerous strands of warfare, and the most commonly referred to are Kinetic warfare (conventional and non-conventional, including chemical, biological and nuclear), Non-kinetic warfare, hybrid warfare, cyber warfare, space warfare, economic warfare, psychological warfare, media warfare, ecological warfare, and even the vaccine warfare. The primary purpose of each of these shades of warfare and many more is to cause pain and punishment (P2), disruption and destruction (D2), and that too, against the poor, needy, helpless non-combatant men, women and children.

Without going too far back in the history of generational warfare, let’s have a cursory look around the world since the beginning of the 21st century, and perhaps, one would agree with my argument.

Do the people of Indian-Occupied Jammu & Kashmir deserve P2D2 by Indian Terrorism (IT)? This is my interpretation of IT in response to India’s External Minster Jai Shankar’s interpretation of IT as International Terrorism, with fingers pointing towards Pakistan. One simple statistic will prove my interpretation of IT as Indian Terrorism. Just compare the figure as to how many Kashmiris have laid down their lives in their just struggle for self-determination that was promised to them by age-old UN Resolutions, versus a number of Indian Terrorists (Indian Law Enforcers). And, how many Pakistanis have embraced Martyrdom during its support for the Global War on Terror (GWOT)? I think Jai Shankar has the correct figures and knows who is conducting state terrorism and who has fought, supported, and suffered during GWOT.

Coming back to the title, after briefly defining various shades of warfare, let’s have a look at different aspects of welfare. The Creator, through His Messengers and Holy Books, repeatedly called for the care of the poor, needy, helpless, old, women, children, and even animals. Hence, the first Islamic Welfare State was established by Prophet Mohammad (Peace Be Upon Him) in Medina after he migrated from Mecca in 622 AD.

While the warfare continued during the Prophet’s period, welfare remained a priority, and therefore, it became far easier to convince the people of the captured territory to embrace Islam. The conduct of the winning forces of the new religion was so inspiring that the people did not hesitate to convert to Islam and become eligible for the help and support of other brothers and sisters, primarily because The Creator had reminded Muslims repeatedly that all of you are one. The rights of religious minorities were so defined that all communities could live in peace and harmony without any discrimination.

Let’s return to the 21st Century. All wars since the beginning of this century have been between Unequal Military Powers (UMPs). The UMPs denote the wars between US-led western allies versus a poor, helpless, and weak developing country that results in P2D2 for the people of the target state.

While warfare brings P2D2 for the poor people of a developing nation, the absence of war and welfare can bring peace, progress and prosperity (P3), dignity, desire, and development (D3) among the unspoken, unheard, and undernourished people in the underdeveloped countries and the regions.

May I request academia to vigorously debate between P2D2 versus P3D3, to achieve at least two objectives: create hatred for warfare, and promote the significance of welfare? By doing so, if we can avert the next war, no matter how limited and in which region it may start, and change the lives of the people in any one country, no matter what religion and region, I think we would have done a great job.

Dr Zia Ul Haque Shamsi is the author of ‘Nuclear Deterrence and Conflict Management between India and Pakistan’ and ‘South Asia Needs Hybrid Peace.’ He is presently working as Director (Peace and Conflict Studies) at the Centre for Aerospace & Security Studies (CASS), Islamabad, Pakistan. The article was first published in Daily Times. He can be contacted at: cass.thinkers@gmail.com.

The Internet of Military Things (IoMT) is a class of heterogeneously connected devices employed for future warfare. It has wide applications in advanced combat operations and
110 views