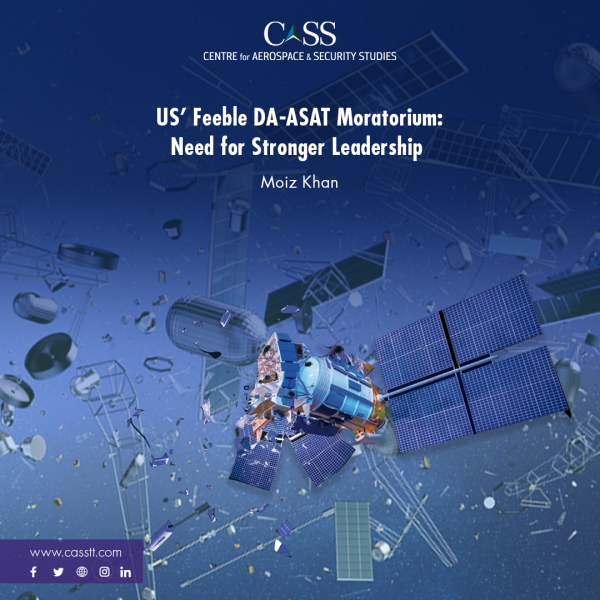 The United States adopted a unilateral voluntary moratorium on the ‘destructive testing of Direct-Ascent Anti-Satellite (DA-ASAT) weapons’ on 18 April 2022. The declaration was announced by US Vice President Kamala Harris during her visit to the Vandenberg Space Force Base in California. The commitment makes the US the first country to ban DA-ASAT weapons’ tests that include surface-to-air missiles launched to destroy satellites orbiting Earth. The declaration urges other space-faring nations to follow suit, seeking to establish the ban as an international norm or customary international law for space security. Currently, there is no international legal instrument banning such tests.

The US’ declaration prohibits destructive DA-ASAT tests as they create enormous debris in space. While citing the Chinese 2007 and Russian 2021 ASAT tests, the US Vice President called these tests ‘reckless’ and ‘irresponsible’. Ironically, she failed to mention the 2019 Indian ASAT test which NASA Administrator Jim Bridenstine had called ‘terrible’ and that created 400 pieces of orbital debris.

The US’ silence on the Indian ASAT test is because of  her strategic partnership and alliance in Quad. Instead of giving carte blanche to India by not criticising it, the US needs to first focus on its allies to adopt measures related to ASAT tests. In this regard, India and Japan have already pledged to consult on norms and rules concerning the safety and security of outer space.

The debris created out of destructive ASAT tests poses an enormous threat to the safety of outer space as it spreads across space and orbits Earth with an enormous speed, posing collision risk  with crewed spacecraft and other satellites. As of now, the US (3), Russia (11), China (1) and India (1) have conducted nearly 16 destructive ASAT tests which resulted in the creation of 6,300 pieces of orbital debris. The Biden Administration hopes that the declaration will be followed by other states and advance US’ interests in preserving the security and sustainability of space against debris given its reliance on a vast number of satellites meant for civilian and military purposes.

Though the US’ declaration received appreciation, it remains inadequate in advancing the ASAT weapons arms control goals nor is it sufficient for initiating international norms. The declaration only bans the ‘destructive DA-ASAT’ tests that create space debris. This implies that the declaration does not ban development, deployment and use of DA-ASAT weapons. During a conflict or a disaster, the US may resort to using DA-ASAT weapons to deter adversary proactive actions or thwart its space capabilities. Moreover, the US may declare a particular satellite dysfunctional and target it under the pretext of security to humans. In 2008, under Operation Burnt Frost, the US used a sea-based Standard Missile (SM-3) defence interceptor to destroy an ailing satellite. The SM-3 is a land and sea-based interceptor used against short to intermediate-range ballistic missiles for exo-atmospheric interceptions. US’ continued tests of the SM-3 interceptor will also enhance its ASAT capability, besides BMD interception, as both BMD and ASAT share much of the same infrastructure and hardware.

The declaration also does not impose restrictions on DA-ASAT testing in a less or a non-destructive manner. The US could use the weapons in higher altitudes, or conduct such tests against simulated orbital targets. Moreover, the announcement does not forestall space-based co-orbital ASAT tests, which use another spacecraft to interfere with satellites placed in the same orbit. Both the US and Russia have such co-orbital ASAT capabilities. Since 1959, the US has conducted only 1 co-orbital ASAT test, while Russia has performed 22 such assessments.

In this regard, Russia and China criticised the US over its announcement for being hypocritical in expanding its military innovation under the pretext of arms control. Russia noted that the US has already completed its ASAT capabilities and has integrated such weapons into its arsenal. China also criticised the limited scope of the US’ ASAT ban and blamed Washington for opposing the joint China-Russia draft treaty, submitted to the United Nations in 2008. The draft treaty bans the placement of weapons in outer space. The US opposes it as it will undermine its BMD systems, and other co-orbital ASAT capabilities.

If the US truly desires to lead in establishing international norms against ASAT weapons and to promote the security of space, it needs to adopt a comprehensive approach toward space arms control, instead of taking cosmetic initiatives. First, the US should expand its unilateral moratorium of DA-ASAT tests to include a ban on the development, deployment and use of such weapons; the ban needs to also include weaponisation of co-orbital spacecraft or any other system against satellites. Moreover, the US, being a leading space power, is morally obliged to lead international arms control negotiations on the security of space, including the 2008 joint Russia-China draft treaty; the Russian sponsored 2008 draft treaty in the UN, titled, ‘Prevention of an Arms Race in Outer Space’ (PAROS); and, the 2021 UNGA Resolution  UNGA/RES/76/231, initially sponsored by the United Kingdom, that mandates a new Open-Ended Working Group (OEWG) to negotiate ‘Reducing Space Threats through Norms, Rules and Principles of Responsible Behaviours.’ The OEWG is to hold its first meeting in May 2022 to discuss norms for reducing space threats. The US’ active role in the negotiations could build momentum in enacting multilateral arrangements against tests and use of ASAT weapons.

Moiz Khan is a Researcher at the Centre for Aerospace & Security Studies (CASS), Islamabad, Pakistan.

According to a study, the average human being spends around 90,000 hours of life at work. Hence, it is important to understand how the work
174 views