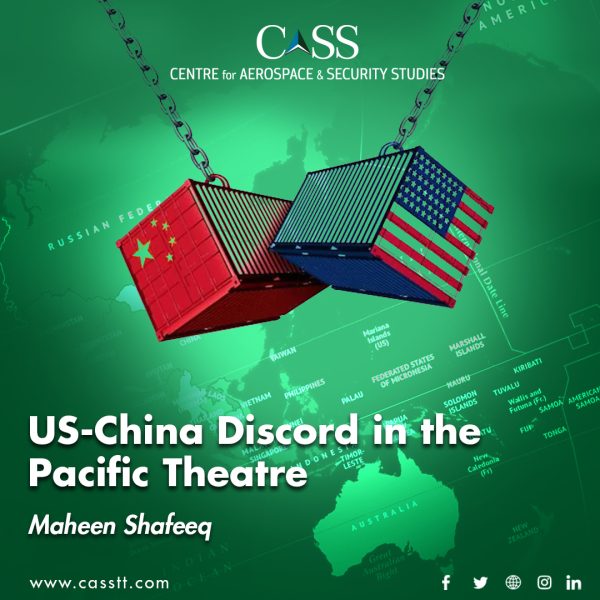 Nancy Pelosi’s recent visit to Taiwan from 2-3 August 2022 has opened a forbidden chapter in US-China relations. The visit, according to the official statement, was meant to be in good faith to defend democracy and present proof of the US’s ‘commitment’ to Taiwan; however, it has left US-China relations in high dudgeon that could have a long-lasting impact.

Prior to the visit, China expressed strong opposition and had even threatened a military response.  However, when the visit went on as scheduled, Beijing was provoked, and it instantly responded by carrying out extensive military exercises and drills around the island. This visit, followed by the Chinese reaction, has renewed US-China contention.

The People’s Liberation Army’s (PLA) Eastern Theater Command was put on high alert and conducted joint exercises in six areas close around the Taiwan island from 4-7 August 2022. The PLA claimed to have the ‘ability and means to carry out precise target shooting from the air to defeat any enemy.’ Their naval aviation brigade held live-fire drills focusing on air-to-ship and anti-submarine strikes. In addition to this, conventional missile test launches were also undertaken. Such a rapid military response to the visit showcased China’s disapproval and the extent to which it was willing to go if the US marched into the no-go zone.

The US has had an active military presence in the Asia-Pacific since the end of World War II. It set up a US Pacific Command (USPACOM) (renamed ‘US Indo-Pacific Command’ INDOPACOM in 2018) comprising of the US Army, Navy, Air Force and Marine Corps forces, with greater emphasis on the role of the Air Force and Navy. With an extensive budget, the US has ‘headquarters and major ground units’ in allied countries like Japan, South Korea, Australia, and military facilities on the islands of Guam, Hawaii and Diego Garcia as well. It has also been increasing the scope and complexity of joint military exercises and operations to pursue a diverse force posture in the region. However, the extension of alliances, joint exercises and operations did not aggravate China as much as the House Speaker’s visit. Despite its extensive military footprint, China’s reaction, prompted by this two-day diplomatic visit, is indicative of Taiwan’s significance.

According to the 2022 ‘US-Indo Pacific Strategy’, China’s ‘growing pressure on Taiwan’ (as well as other regional allies) was ‘harmful behaviour’ and the US would prioritise its ‘single greatest asymmetric strength’, which was its network of security alliances and partnerships. Pelosi’s visit seems to be in line with this strategy to ‘support regional peace, security, stability’ in the Asia-Pacific.

Beijing has demanded that the US respect its ‘core interests and concerns’, and abandon the use of the Taiwan to counter China, warning that bilateral tensions will increase if the US does not pull back from the brink. After a falling-out in US-China relations due to Pelosi’s visit to Taiwan, China announced eight countermeasures. For one, their relations in the defence and diplomatic realm have taken a great hit. The visit has led to the ‘cancellation’ of three Sino-US military talks, including China-US theatre commanders’ talks, Defense Policy Coordination Talks (DPCT), and the Military Maritime Consultative Agreement (MMCA) meetings. In addition, China has also ‘suspended’ US-China cooperation on illegal immigrants, legal assistance in criminal matters, transnational crimes, counternarcotics cooperation and climate change. China has also ‘sanctioned’ Pelosi and her immediate family members, making her the highest-ranking US politician to be sanctioned by the PRC. The ‘suspended’ non-traditional security matters would not have as much impact as the ‘cancelled’ matters of traditional security as these are ‘meant to build confidence and bolster crisis management potential.’

Many in the US have expressed concerns regarding China’s reaction and claimed that Chinese leaders would be responsible for any escalation, not Pelosi. The White House has repeatedly tried to convince the international community that Pelosi’s visit had nothing to do with US’ official policy towards China or Taiwan. A number of analysts have stated that China has ‘overreacted’ and thrown ‘tantrums’ for no reason. In response to this, the Chinese Foreign Minister expressed that China would not forget their national shame, and that the US should not pretend to act surprised by the reaction as it was warned to stay away. The visit shows a lack of understanding of the matter’s sensitivity between the two parties.

Bouncing back from this event is likely to be an uphill battle. Any accidental or miscalculated action could lead to an unintended global crisis. The last thing the world needs right now is a military escalation (even if indirect) between two great powers. While the two nuclear-armed states may not have any outright wish for war or direct military confrontation, high-level threats and alerts in the Asia-Pacific do not appear to be cooling down any time soon.

Maheen Shafeeq is a Researcher at the Centre for Aerospace & Security Studies (CASS), Islamabad, Pakistan. She holds a master’s degree in International Relations from the University of Sheffield, UK. The article was first published in The News International. She can be reached at cass.thinkers@gmail.com