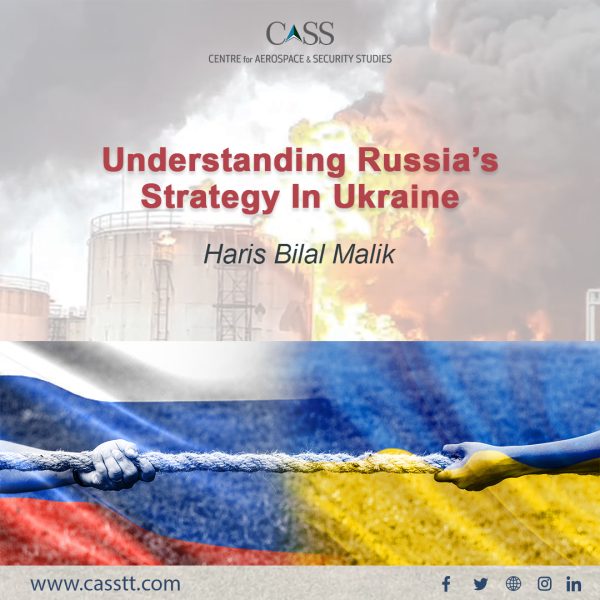 The ongoing Russia-Ukraine conflict is one of the most significant case studies of modern-day warfare. Although the conflict has remained limited so far, the risk of inadvertent escalation, vertically or horizontally, remains high. The conflict revolves around several key factors. For instance, Ukraine’s inclusion in NATO, the United States’ security commitment towards Europe vis-à-vis NATO and the Russian response to increasing Western influence in its neighbourhood.

Russia invaded Ukraine on 24th February, 2022 after prolonged tensions. Since then, Russia’s war strategy in Ukraine has become an important topic of international security discourse. Specifically, Moscow’s employment of various elements of national power is worth examining. Which elements of national power were given preference over the other? And how the Russian strategy is different from the US’ strategy when it comes to military intervention and exercising the great power role across the world?

As far as employment of its military as an element of national power is concerned, Russia has employed its military might in all domains against Ukraine. Nonetheless, despite being a much stronger military power, Russian forces have faced considerable setbacks causing unexpected blowback. For instance, ‘Moskva’, the flagship of the Russian Black Sea Fleet, and symbol of its naval assault against Ukraine, was destroyed due to a reported Ukrainian missile attack despite having a credible and advanced air defence system on board.  The ship was among the biggest warships that Russia has ever produced. Moreover, it was the biggest ever warship that has been sunk since World War II. Similarly, many believe that despite possessing air strength, Russia was unable to establish air supremacy against a relatively weaker and smaller Ukrainian Air Force.  Russia has also faced significant loss of its land force personnel in Ukraine. This raises questions about her ongoing military strategy.

One may argue that Russia wanted to project its military supremacy against the US’ increasing political and military involvement in the region. Even though Moscow has opted for hard power projection in its campaign, its military invasion might not be as prolonged as the US’ past invasions. Evidence comes from the assertion of Russia’s Ministry of Defence that the first phase of its special military invasion of Ukraine has been completed stating that major objectives had been achieved. It was further insinuated that now the major focus of Russian intervention has shifted to eastern parts of the country in order to help ensure the ‘liberation’ of Donbas.

Russia’s economic element of national power is also on a weak footing. There is an enduring uncertainty about her ability to sustain the financial burden of a large-scale military invasion in the neighbourhood for a longer period, as the US did in Afghanistan and the Middle East primarily because of its strong economic backing. This is where Russia lacks strength. This element of power is of more concern for the Kremlin, especially at a time when the US has already imposed sanctions on its financial system, banking channels, state-owned enterprises, and politicians, among others. These recent sanctions on Russia are the toughest sanctions ever imposed by the US. Given their prospective blowback, it might become difficult for Moscow to sustain the conflict in Kyiv for a longer period. It was the economic cost of the Cold War and Afghan War, which the former Soviet Union was not able to sustain and that resulted in its disintegration.

Military invasions have remained a crucial part of the US’ great power projection in the past two decades. For instance, countries like Afghanistan, Iraq, Syria, and Libya, where the US pursued a strategy of hard power projection and spent trillion of dollars to only justify its great power role and the role as a security guarantor. While the attainment of military objectives in these invasions is debatable, the US government and its economy absorbed the costs. Russia’s strategy in Ukraine, as it appears, has somehow not been able to succeed. It proves once again that the projection of military prowess alone might not work, and it is all about how one country strategises its military might and other elements of power appropriately, in order to achieve the desired aims and objectives.

Haris Bilal Malik is a researcher at the Centre for Aerospace & Security Studies (CASS), Islamabad, Pakistan. The article was first published by Eurasia Review. He can be reached at cass.thinkers@gmail.com