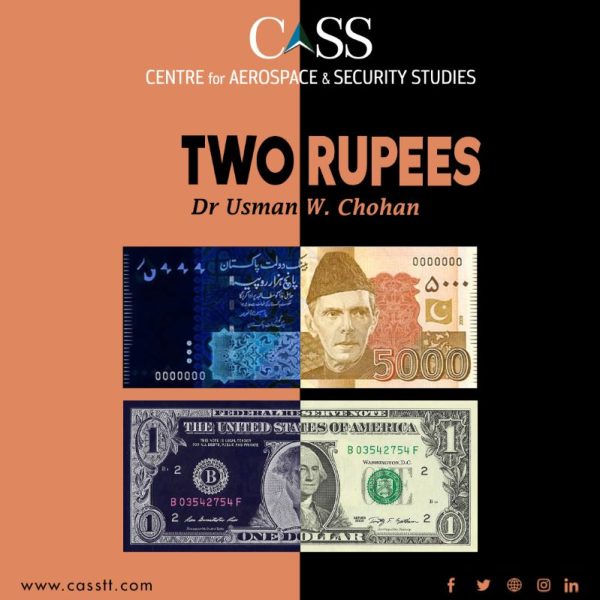 There are two currencies in Pakistan: one is the rupee at the official rate, and the other is the rupee in the gray market. One is currently trading in the Rs.220-230/dollar range, while the other (and much rarer) currency trades at more than Rs.260/dollar, and so they trade at different prices, despite having the same name. Whether one aims to trade either one, however, the problem is the same: there simply aren’t enough dollars to trade for either one. This is in fact the most pressing problem that Pakistan faces, with foreign reserves having fallen below $5 billion dollars. This gives the country an import cover of a very short nature, and so urgent infusions of dollars are required.

Pakistan is not the only country that faces this challenge, however, since the problem has more to do with the US dollar itself rather than with any developing country. Egypt, Ghana, Sri Lanka, El Salvador, and many others face acute shortages and have made their way to the IMF, which is demanding serious and focused macroeconomic frameworks that will be more fiscally sustainable in the future. The currencies of these countries have also fallen and are trading in two measures as well (like our two different Rupees). Whereas 16 Egyptian pounds bought a dollar last year, today it is closer to 28 pounds (and was briefly at 32 pounds).

The central banks of such countries, including our SBP, have thus sought to restrict the outflows of dollars through a series of strict measures. For us, the strictness of the SBP measures has resulted in a gray market, which is the second Rupee’s domain, and the one towards which the first Rupee is being forced to gravitate . The SBP’s measures are also severely damaging to the real economy, since its refusal to issue letters of credit (LCs) to importers has meant that more than 5,700 containers cannot be processed, many of which carry items such as food, medicine and industrial raw materials, which are thus spoiling away at the ports.

Many key industries in Pakistan require imports as part of the inputs in their exportable finished goods (cotton for textiles, for example). Without these imports, the export-oriented industries cannot produce their goods and thus generate foreign exchange, which is precisely how the problem began in the first place. In addition, the government generates significant tax revenues from imports, which means that there is a hit on the revenue collection side (fiscal deficit) as well. Since the State Bank Amendment Act was hurriedly passed more than a year ago, the remit of the central bank was narrowed to inflation-management. It was not to act as a de facto broker for dollars, or as an import czar that refuses all imports. By the narrow mandate that it received, it has failed, since Dec. 2022 inflation was in the ballpark of an astounding 25%. In the meantime, its erstwhile responsibility to protect the Rupee has also stumbled, since the country now wields two alternate Rupees, neither of which can be exchanged easily for dollars, and people have begun to hoard any remaining dollars while piling up into gold as an alternative.

The IMF is loath to tolerate two separate Rupees, and it is pressurizing the government to accept the (gray) market rate in a freely-adjusting system rather than trying to create a Venezuelan or Argentinian farce of an official vs. unofficial rate. The problem is that, due to panic in the market, the gray rate is also perhaps an exaggerated one, and the actual rate is closer to the middle of the two values. In addition, the current dispensation has boasted extensively about securing the Rupee, knowing full well that it is not in a position to do anything about a global polycrisis (inflation, war in Ukraine, supply chain disruptions, US Fed policy).

But the notion that two different rates can persist is silly, and will have to be reconciled soon enough, especially when the IMF will be the ultimate arbiter of dollar resupply in Pakistan. Therefore, the tough choices that it is forcing must be considered with courage and sobriety. Last week, the head of the Karachi Chamber of Commerce (KCC) ceremoniously offered to hand the keys of his organization to the Governor SBP, since there was nothing he could no longer do. It would be better still, however, if the keys of the nation are handed to the people, before the crisis worsens any further.

At a time when the economy is going through an acute crisis; when households, industries, and the government are all feeling a severe pinch, some scholars
281 views