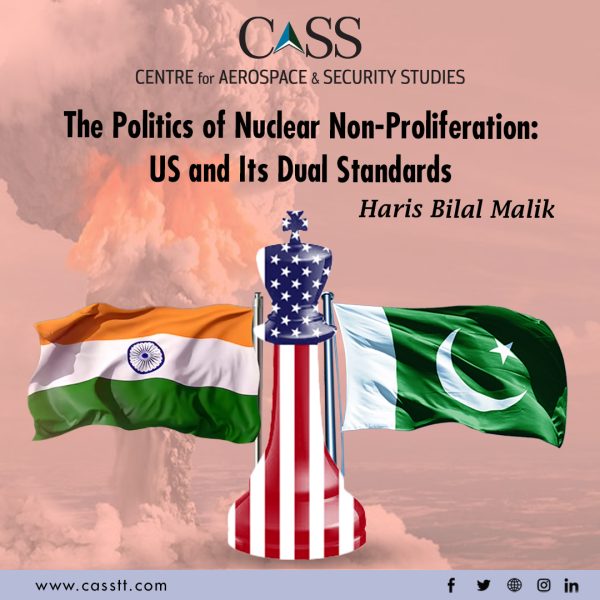 ‘Dual standards of nuclear non-proliferation’ refers to different standards which are used to treat ‘new proliferators.’ This includes the use of legal standards and political and diplomatic coercion in order to disarm them or limit their nuclear capabilities. This can create a situation where some countries are effectively discouraged or prevented from pursuing their nuclear capabilities, while others can pursue them with relative impunity. Such practices undermine the principles of fairness, equality, and universal application of laws in the international system. For example, this debate is relevant to the nuclear programmes of both India and Pakistan. There is a history of how the US has treated the two countries differently. While Pakistan has been treated with penalties in the form of sanctions, the US policy towards India can be characterised as that of ‘exceptionalism’.

On 7 December 2022, the US Department of Commerce blacklisted 24 companies due to national security and foreign policy considerations. The US maintains a list of companies and organisations that are subject to certain trade restrictions, known as the ‘Entity List.’ This list is managed by the Bureau of Industry and Security (BIS) within the US Department of Commerce. 10 of the 24 companies, added to the entity list, are based in Pakistan and United Arab Emirates (UAE), which are allegedly linked with Pakistan’s nuclear programme or ‘missile proliferation-related activities.’ This is not the first time that Pakistani companies have been blacklisted by the US on such concerns. In November 2021, the US added 16 Pakistani and Chinese firms to this list. Being placed on the Entity List can have significant consequences for a company. The companies, once added to the Entity list by the US Department of Commerce are required to undergo ‘special licensing before exporting or importing products to or from the US’. This also restricts their ability to do business with companies from other countries.

On the other hand, the US has developed a strategic partnership with India in recent years. This has led to some changes in the way the two countries cooperate on nuclear issues. For instance, in 2008, both agreed on civil nuclear cooperation, that allowed India access to US nuclear technology and fuel for its civilian nuclear programme. This cooperation paved way for the removal of the Indian Space Research Organization (ISRO) and the Defence Research and Development Organization (DRDO) from the same Entity List in 2011.

In the follow-up to the civil nuclear cooperation agreement, India claims that it has separated its civilian and military nuclear programmes. However, the reality of this claim was dissected in a detailed study ‘The Three Overlapping Streams of India’s Nuclear Programs’ carried out by the Belfer Centre at the Harvard Kennedy School. The study revealed that though there has been a separation, it was meaningless and ‘incomplete’. Practically, there are now three overlapping streams within the Indian nuclear programme: the ‘civilian safeguarded’, ‘civilian un-safeguarded, and the ‘military’ nuclear programme. According to the Belfer study, ‘Some civilian facilities, even when operating under certain provisions of India’s safeguards agreement with the International Atomic Energy Agency (IAEA), may contribute to India’s stockpile of unsafeguarded weapons-usable nuclear material.’ The study raised serious concerns that despite the IAEA safeguards and additional protocols, the relationship between these three streams was not transparent. The inadequate separation would likely result in the provision of weapon-usable nuclear material for India.

Despite these shortcomings and overlaps between India’s civilian and military nuclear infrastructure, the country’s trade with the US and over a dozen nuclear suppliers is being facilitated. Pakistan’s entire civilian nuclear programme is under IAEA safeguards and poses no risks of diversion toward the military programme. Yet, Pakistan’s access to technology is being restricted through measures like the Entity List.

The recent blacklisting of Pakistani companies by the US has more to do with politics, diplomatic pressure, and coercion, and less with nuclear proliferation. Export controls are becoming a powerful tool used by major powers to pressurise and influence the policies of weaker states. While Pakistan fully supports non-proliferation ideals through robust measures of its own, the instruments of non-proliferation should not be politicised through the maintenance of dual standards.

Haris Bilal Malik is a Research Assistant at the Centre for Aerospace & Security Studies (CASS) in Islamabad, Pakistan. The article was first published in Modern Diplomacy. He can be reached at cass.thinkers@casstt.com