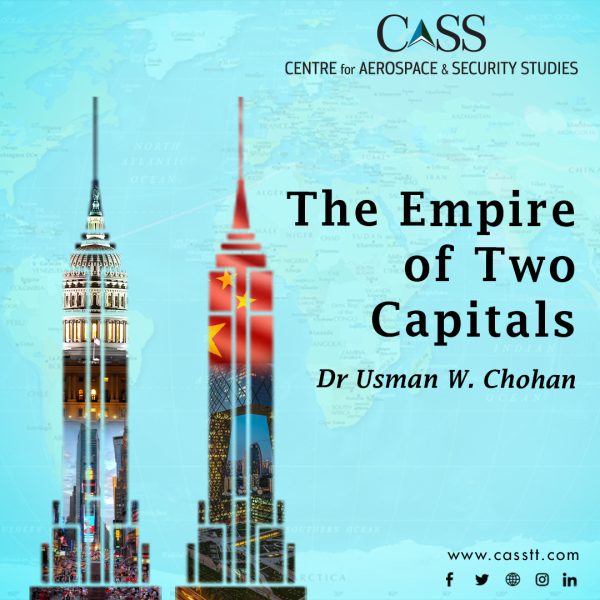 Whereas most great nations have built singular capitals whose ethos has guided national narratives and designed national strategy, some powers have instead had “two capitals” that operate on conflicting and competing logics.  Beijing, for example, is the singular capital of the People’s Republic of China, and it thus drives both the geostrategic and geoeconomic objectives of the Chinese state in a concerted, harmonious manner. In other words, the economic community and the security community in China are of one mind, enabling them to conduct effective “geoeconomics,” which is a function of both strategy and economics executed in tandem.

The United States, by contrast, has “two capitals” that proceed from conflicting logical premises. It has what we might call the “New York community” (i.e. Wall Street) that is driven by a market-based logic of cointegrating economies and generating profits, but it also has the Washingtonian “DC Crowd” which operates on traditional hard-security lines. The NY Crowd is driven by titans such as Goldman Sachs and JP Morgan, while the DC Crowd draws upon institutions such as the State Department and the Pentagon.

During the Cold War, it was the DC Crowd that maintained primacy in directing US policy, arguing from a siege-mentality for competition with Moscow for the preservation of security and hegemony, and fighting through proxies across the entire world as a battlefield. Thanks to help from Pakistan and some other countries, the DC crowd emerged triumphant in the early 1990s, having cemented a monumental effort into achieving a unipolar world at the mercy of a victorious empire. At that point, however, the New York crowd stepped in more forcefully in directing US policy, and it argued that, since we had arrived at the “end of history,” it would be important for an economics-led prism to guide the US in the century ahead. This is because an economic-orientation would assure (their) prosperity and keep a “soft power” leash on the world, which would be far more palatable, and far less expensive, as an instrument of empire.

With respect to what was then seen as the next big threat (China), the New York crowd pacified the DC folk by continually arguing that Peking would follow in the footsteps of Taipei and Seoul, which is to say that economic cooperation and investment would come first, and in time Peking would come around to the American way of thinking (free-market capitalism and Western-style democracy). Truly, Taipei and Seoul were governed by authoritarian right-wing regimes in the mid-20th century, but through economic development they shed those hard skins and became genteel democracies and bastions of capitalism, even surpassing the United States in terms of “prosperity” along certain metrics. The NY crowd thus had a credible template, and steered the American public away from the intergenerational fatigue of Cold War adversarialism. American companies then poured enormous investment in China, building up a vast manufacturing base that was complemented by managerial expertise, transfers of technology (ToT), and the acculturation of business best-practices.

China in turn further opened up and became the largest untapped market for capitalist surplus production, gobbling up everything that foreign tastes could satiate. For most American multinationals, China became the single biggest driver of profits and earnings-per-share, thus generating enormous bonuses for the New York executives who chomped on fat cigars and boasted to investors about their “China exposure” in quarterly earnings calls. When I worked on the buy-side (global asset management), my single biggest question to investor relations teams and executives was on their exposure to the Chinese market. This factor would drive my financial modeling, and help determine my judgment on the future path of the multinationals in question. China was simply the main story – indeed, the only story; and New York was smitten with China’s wonderful economic future.

However, the mood began to change after 2016, when Donald Trump was elected US President, and his administration began to levy hefty penalties on China, including trade sanctions and other measures inimical to economic cooperation and mutual benefit. The Trump administration had come to realize that China’s economy was well on its way to surpass the United States by 2030, and yet, it hadn’t followed the same path as Seoul or Taipei. It still had the Chinese Communist Party (CCP), which was largely admired by the Chinese people for its transformative economic policies that offered a clear-cut counter-narrative to the American model of economic and social development. China had accomplished the single greatest economic miracle in human history, lifting 700 million people out of poverty within two generations, a feat that took the West far longer to achieve, and of course the West was receding into decline in any case.

By this point, the DC crowd had forcefully challenged the New York folk who had grown fat on the riches of commerce with China. They pointed out that China had a strengthening array of both hard and soft power assets, and if timely action isn’t taken, the American Empire would fade from view without even firing a shot at China. The NY Crowd had taken two decades to realize their proposal of converting Peking into its acolyte, but instead China was already chipping away America’s primacy, and that too on the back of American technological, managerial, and material largesse!

Since then, even as the Trump administration failed to be re-elected, the Biden administration has pursued an equally harsh, if not harsher, approach against China. The DC crowd and its Cold War mentality are back in full swing, and the New York crowd is today both embarrassed by the shortcomings in attaining their final objective, and by the increasing diatribe against their winnings from engagement with China. A flurry of recent books has demanded accountability from Wall Street for making so much money by helping China to rise, while leaving the American worker in the dust and the American economy in shambles (particularly after Covid-19).

This is the drawback of an empire with two capitals: they may follow competing (and contradictory) approaches towards maintaining hegemony, and may come to blows as the zenith of the empire wanes and its power begins to fade. There are, however, many sympathetic voices that still argue for a cooperative approach between the US and China, not just within New York, Peking, and even some Washington; but also from around the world as countries attempt a tenuous balancing act between two titans. However, the voice that argues for international economic cooperation, sadly, is being drowned out, and the world will pay a heavy price as the DC folk relegate the NY folk to ignominy.

Dr. Usman W. Chohan is the Director for Economic Affairs and National Development at the Centre for Aerospace & Security Studies (CASS), Islamabad, Pakistan. The article was first published in Islamabad Post. He can be reached at dir.econ@casstt.com.