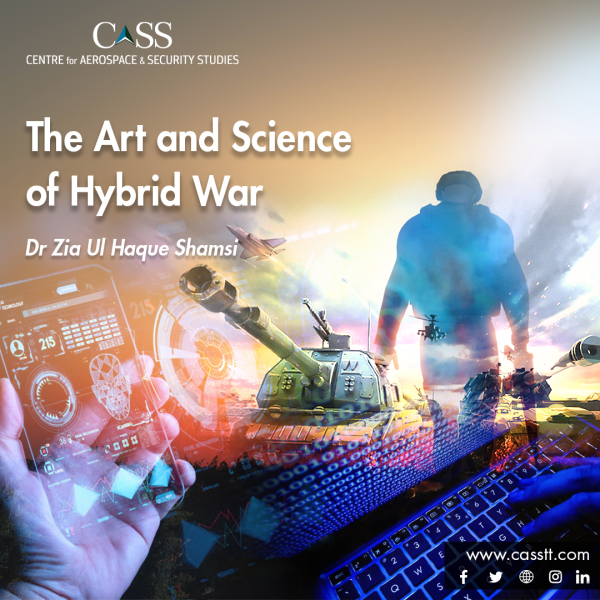 The concept of hybrid war is not new, rather its tenets include all shades of kinetic and non-kinetic warfare. However, what is new is its scientific application in an artistic manner. The artistic mannerism of hybrid war deals mainly with intangible elements: psycho-social, mind-making, negative perception development and management. The primary objective of the executioner remains to create uncertainty and dissatisfaction about the future of the state among the majority of the population. Whereas, the scientific application of the elements of hybrid war deals with tangible impact on people through economic coercion, cyber-crimes, physical impact, and even territorial capture. Perhaps, this ‘hybridity’ makes hybrid warfare the most favourite tool of application by all strategists and practitioners. Moreover, the intangible applications are relatively less risky and do not lead to activation of any international law or violation of major treaties or agreements, at least for now.

The perpetrators of hybrid war aim to create a synergetic effect of their effort on the target state, utilising all available avenues: tangible and intangible. Tangible elements of warfare which are far more scientific now due to the tech revolution in military warfare, and sophistication in weapon inventories, include physical impact through military hardware where the enemy is visible. However, the intangible elements of warfare which fall in the domain of artistic applications, and where the enemy is invisible and operates from within, is far more damaging and effective. This domain of hybrid war has an exceptionally large canvass: for instance, economic warfare may include disruption in stock exchanges and creating volatility in the currency market, both aimed at purposely scaring investors away to weaken a state. According to Colin S Gray, since ‘the character of warfare in a period is shaped, even driven, much more by the political, social, and strategic contexts than it is by changes integral to military science,’ the perpetrators of hybrid war seek to alter the character of the target state for which they are willing to go to any length.

Though hybridity in threats against an adversary is not a new strategy in non-kinetic warfare, it has certainly paralysed the international law in its application to avert the threat, particularly against relatively smaller and weaker states. Perhaps, this is one reason that Europe is faced with another war at the moment, which clearly reflects the inability of international laws to avert kinetic and non-kinetic threats of different nature and character. However, in Vladimir Baytuk’s view from 2017, the most probable driver of the emergence of hybrid threats is grounded in the evolving nature of global order, of which the social, political and economic components have changed dramatically since the end of the Cold War. Perhaps, Andrew Mumford’s description of a hybrid adversary is most comprehensive. According to him, a hybrid adversary is ‘one that uses a combination of political, military, economic, social and intelligence methods of influence, as well as conventional, irregular, terrorist and criminal methods of warfare.’

A glimpse of artistic application of intangible elements of hybrid warfare was witnessed during 2005-20 by Pakistan at the hands of Indian-sponsored campaign, as discovered by European watchdog EU DisinfoLab. Although, Pakistan had been highlighting India’s efforts to soften its inner ring at the international forums, these concerns were not given any weightage until the ‘Indian Chronicles’ appeared.

On the other hand, the scientific application of kinetic element is in full swing in Europe where an ‘Iron Curtain’ is being drawn between Russia and Ukraine, as the war between the two neighbouring states is entering the sixth month. While protracted wars are counterproductive, highly destructive, and expensive, yet the end of this war is not in sight.

Interestingly, the art of executing hybrid war is to evade international obligations and help perpetrators to gainfully employ the intangible elements of warfare. The purpose remains to weaken the target state from within and make people feel insecure, uncertain, and lose confidence in the government and its institutions. Whereas, the scientific execution of hybrid war elements are aimed at physical destruction of the target state through strategic application of sophisticated weaponry and technological means.

The international system is fast evolving with new political alignments. While the United States wants to extend its superpower status through hard power, China is striving to achieve the same through the elements of soft power. Apparently, China is depending on the art of war, whereas the US is deploying the scientific elements. The question remains as to where Europe and Russia stand at the moment? Perhaps, the answer would come when the iron curtain is finally drawn between Russia and Ukraine, unfortunate though that may be.

Dr Zia Ul Haque Shamsi is the author of ‘Nuclear Deterrence and Conflict Management Between India and Pakistan’ and ‘South Asia Needs Hybrid Peace.’ He is presently working as Director (Peace and Conflict Studies) at the Centre for Aerospace & Security Studies (CASS), Islamabad, Pakistan. The article was first published in Daily Times. He can be contacted at: cass.thinkers@gmail.com