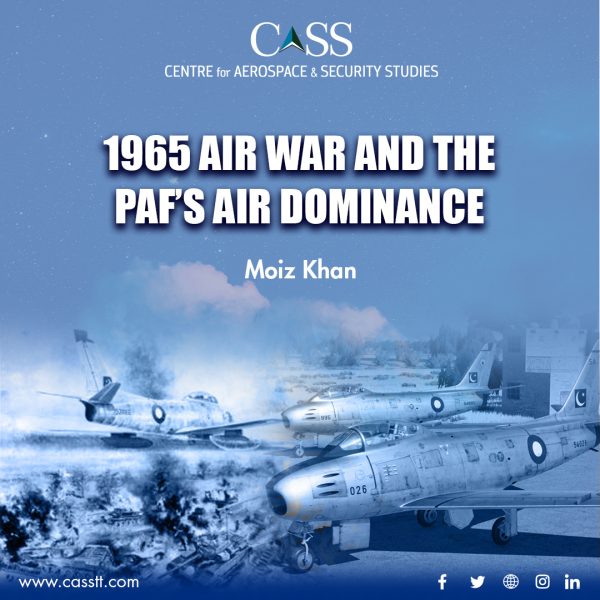 The 1965 Air War between India and Pakistan is often termed as the ‘first real test’ of the Pakistan Air Force (PAF). It had to face the Indian full-scale offensive against Pakistan on September 6, 1965, aimed at knocking out the country and to settle the Kashmir issue. Despite the contending claims, it is quite clear that the PAF outperformed the Indian Air Force (IAF) in the air combat. The PAF’s victory rests upon the sophistication of aircraft inventory and genius of its operational strategy aimed at gaining the control of air.

The control of air is inevitable for a success in any air war. However, there are different levels of control of air including air supremacy, air superiority and favourable air situation, each level demonstrating varied intensity of freedom to conduct air operations. The cornerstone principle of gaining the dominance in air lies in operational strategies including air combat, effectively attacking the enemy bases to destroy its aircraft on the ground and damaging the airfield infrastructure, and close support to the land forces.

Pakistan’s 1965 air war with India bears testimony to the effective employment of core principles of gaining dominance in the air. Realising that India would militarily engage Pakistan to redeem its lost honour during the 1965 Rann of Kutch skirmishes, the PAF Headquarters issued a war plan in July 1965. The plan envisaged that in any eventuality of a war with India, the PAF would focus on denying air superiority to its adversary by conducting the Combat Air Patrols (CAPs), providing close support to the land forces, interdicting their lines of communication, and bombing their airfield infrastructure, as well as neutralising the aircraft and radar covers.

Regarding the air combat operations, Squadron Leader M. M. Alam and Sarfaraz Rafiqui have secured a feather in their caps for their destructive aerial exploits to shoot down the adversary aircraft. On September 1, 1965, the IAF launched four Vampire fighters aimed at supporting its army in Kashmir skirmishes and attacking the Pakistani ground forces. In response, the PAF scored its first victory by downing all four Vampires by two F-86 Sabres, flown by Squadron Leader Sarfaraz Rafiqui and Flight Lieutenant Imtiaz Bhatti. The IAF withdrew the entire fleet of Vampire and they were not seen for the remainder of the war.

Similarly, on September 6, when the limited air and ground skirmishes in the disputed Kashmir region turned into a total war when India launched attacks on Pakistan’s International border, Flight Lieutenant Aftab Alam in an F-104 destroyed a Mystere and damaged another. This engagement also marks a new era of dogfighting at very low altitude, and the first combat kill by any Mach-2 aircraft. In another spectacular dogfight, on September 7, the IAF launched a retaliatory strike against the PAF Base Sargodha. Squadron Leader M. M. Alam led an intercept mission against the IAF Hawker Hunters and knocked down five of them in a single aerial encounter.

Apart from aerial combat, various other airstrikes on airfields and close support to the Pakistan army led to the successful attainment of favourable situation in air. For example, on September 6, The PAF also attacked the Pathankot airfield and wrought havoc on 7 Mach-2 Mig-21s, 5 Mysteres and 1 C119. In its air raids on Adampur and Halwara, the PAF destroyed a large number of Hunter aircraft. However, the airstrikes led by the 6 F-86s of the PAF played merry hell with Indian formations and destroyed the Indian armour and infantry trying to cross the BRB Canal. This single event made a major contribution to the successful defence of Lahore. It was the strategic far-sightedness of Air Marshal Nur Khan, the then Air Chief, to carefully plan missions, particularly, close air support to the army. Otherwise, the Indian Generals would have had their drink at the Lahore Gymkhana Club on the evening of September 6, as promised by them.

During the initial two days of war, September 6 and 7, the IAF suffered heavy losses and was compelled to stop air raids against Pakistani bases. The IAF also avoided engaging the PAF in the air combats. Thus, the reluctance of the IAF allowed the PAF to gain favourable air situation which established a clear ascendency over India that lasted for the duration of the war. India remained badly mauled and unable to achieve significant gains during the course of the war. According to estimates, the PAF combat-related losses amount to 12 F-86s, 1 F-104 and 3 B-57s. While India lost minimum of 66 aircraft, in which 39 were destroyed by the PAF in its air to ground strikes.

Since its inception, the PAF has been nurtured to deal with the Indian threats. Keeping in view India’s conventional military strength, the PAF has been configured to gain and maintain effective control of air by sustaining air superiority or at least favourable air situation over the battlefield and its own territory. Therefore, air combat, ground attack operations and close air support missions for the army and navy have always been the integral part of the PAF’s strategy. To better employ its strategy, the PAF has given high priority to air combat training of its pilots and to maintain best possible fighter aircraft and weapon systems within the political and financial constraints. Fortunately, the PAF had experienced considerable transformation in terms of its war-machine. Pakistan’s membership of the CENTO and SEATO defence agreements helped the country to turn the PAF into full-jet air force by the mid-1960s to deal with challenge of air complexities of the supersonic age by procuring transonic F-86 Sabres, the Mach-2 F-104 Starfighters, the B-57 bombers and the RB-57 reconnaissance jets. These sophisticated aircraft allowed the PAF to effectively employ its operational strategy and demonstrate its forte in air combats, strikes against airfields, and close support missions to the army.

Moiz Khan is a Researcher at the Centre for Aerospace & Security Studies (CASS), Islamabad, Pakistan.