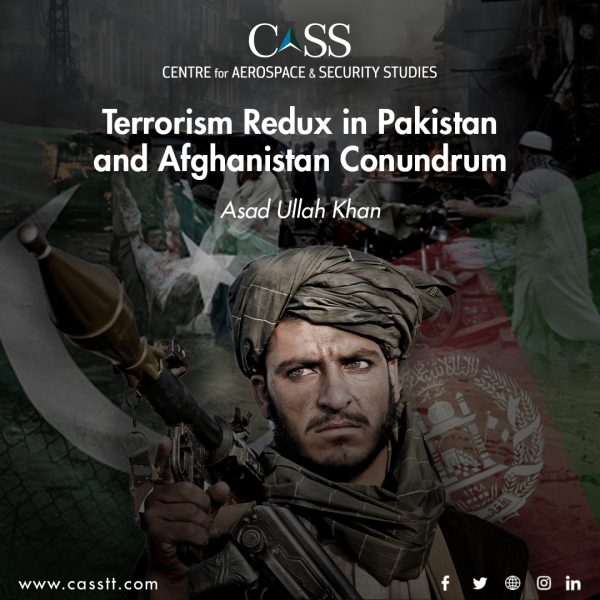 Eliminating the menace of terrorism is the biggest success Pakistan has achieved in the past decade. Now was the time to consolidate those achievements and move forward. Unfortunately, once again a gradual rise in terrorism has been observed in Pakistan, especially since the last year. There are multiple factors for instance, the evolving situation in Afghanistan and the resultant regional security dynamics, and of course internal political situation. In 2021, there was a rise of 42% in terrorism-related incidents. This has not slowed down even in 2022 rather, an increase of almost 50% (434 attacks) in the first six months of this year has been recorded.

Since the fall of Kabul, Pakistan was hopeful that after being a victim of foreign aggression, the Afghan Taliban would have learnt a lesson and would not allow their soil to be used against other countries, included neighbouring Pakistan. Unfortunately, the already banned terrorist outfit, ‘Tehreek-e-Taliban Pakistan’ (TTP) has been provided a ‘safe haven’ in Afghanistan. By virtue of this, in 2021 alone, TTP carried out 128 terrorist attacks inside Pakistan. The de-facto political support by Afghan Taliban also enabled TTP to embolden their stance and demands from Pakistan during the fractured negotiations process quite recently that ended without any concrete outcome, since the group’s demands were unrealistic and unconstitutional. The time gained during the negotiations process was utilised by TTP to re-organise and restructure their rank and file. TTP’s strict adherence to their illegitimate demands is evidence of the fact that the group has clearly relocated to Afghanistan and gained strength during this period.

Despite New Delhi’s past propaganda against the Afghan Taliban, labelling them as Pakistan’s proxies as well as being the first state to withdraw its diplomatic mission from Afghanistan, very recently, India has been mending its ties with the Taliban government in Kabul. Opening the line of communications in the form of a high level diplomatic visit and also seeking to expand security ties, the current shift in Indian policy towards Afghanistan shows that it wants to curtail and harm Pakistan’s interests in the region. This renewed attention towards Afghanistan is primarily driven by the fear that the current Taliban government would enhance Pakistan’s geopolitical interests.

At the same time, the shift in Afghan Taliban’s policy towards India could be in line with their aim to get maximum diplomatic recognition while having good relations with New Delhi. However, it must be understood that, by exploiting the existing differences between Afghan Taliban and Pakistan, on the issue of handling TTP in Afghanistan, India is paving its way to again use Afghan soil against Pakistan. In this regard, the state launched the TTP India Chapter aimed at targeting Pakistan and also Indian minorities. Moreover, New Delhi’s interest in Kabul is not a lone act. For instance, the recent meeting in May between the United States Special Representative of Afghanistan, senior Indian officials and Abdullah Abdullah, is a clear indication that India is in close coordination with Washington in pursuit of mutual interests in the region in general, and Afghanistan in particular.

Last but not least, Pakistan’s internal political and economic crisis has affected its ability to handle the spill over effect of militancy after the US’ hasty withdrawal from Afghanistan. Given internal firefighting, Islamabad has been unable to catch up with the developments taking place in Afghanistan. This has relatively reduced its capability to respond effectively and mitigate the emerging challenges discussed above.

Moreover, India, under its grave hybrid agenda against Pakistan, has tried to exploit the political unrest in the country through propaganda tweets from clone Twitter accounts. One pertinent example is of a tweet from the twitter handle of International Human Rights Foundation (IHRF) in which it shared concerns on the ongoing political crisis in Pakistan More than 100 Indian news channels quoted a tweet, in which, IHRF urged a Pakistani political party to share evidence of political unrest so that the situation could be exploited in India’s favour. Important to note that IHRF was registered on 24 July 2020 in Mumbai.

With closer ties with India, the Afghan Taliban might further pressurise Pakistan to remain engaged in the negotiations process with the TTP. However, Pakistan’s ability to counter cross-border terrorism should continue to be utlised no matter how the negotiations process goes. Elements, that are a threat to national security, can be countered using unmanned aerial surveillance. Moreover, a terrorist organisation, may be defeated when it is polarised due to internal distribution of power issues. An attempt to divide TTP from within could be made by offering them political or monetary inducement (under the constitutional framework), coupled with targeted operations, that may attract some of the leadership in the second tier to break away from the group.

India would continue to harm Pakistan. In all this, internal strength is the prerequisite to deal with any and all external challenges. Unless Pakistan is internally strong, it would not be able to fight on external fronts, especially hybrid warfare. Putting our own house in order, politically and economically, would serve our national interests.

Asad Ullah Khan is a Senior Researcher at the Centre for Aerospace & Security Studies (CASS), Islamabad, Pakistan. The Article was first published in Pakistan Observer. He can be reached at cass.thinkers@gmail.com