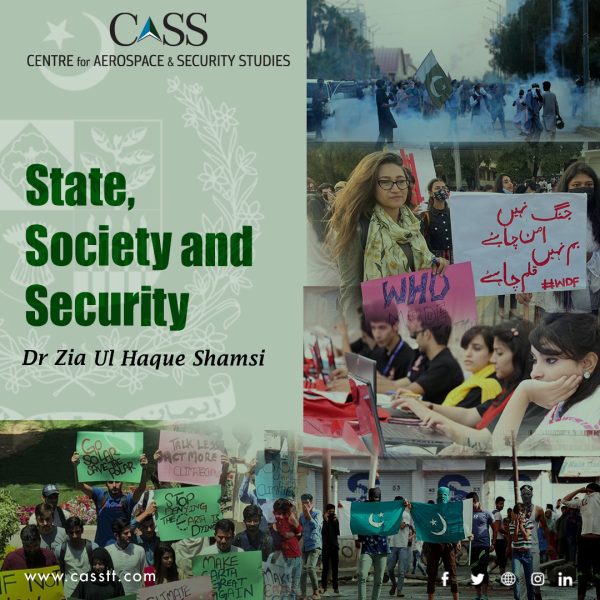 Traditionally, state security meant the defence of the homeland from external physical threats, whereas societal security is evaluated on the canvas of human security. However, it is necessary to understand that the state is primarily a political entity accepted by international institutions for recognition and relationship, but it does not operate in isolation. A state emerges within a society, gradually taking on its specific form and character, and all national societies owe their peace and order to the existence of the state.

The state provides political, legal, military, and moral cover to the society that resides within its physical and territorial boundaries. However, the essence of security has a much wider canvas and societal security requirements in the changed paradigm are evaluated based on basic human needs.

Afghan society, as we have seen, has valiantly resisted invasions and interventions by at least two superpowers of recent times: first the erstwhile Soviet Union, and more recently, the United States. It is now abundantly clear that Afghan society could not be subjugated even if the state could not provide them physical security or any other element of human security, including political, personal, community, food, health, economic, and environmental security. This implies that societal strengths lie, in essence, in the values on which the society has lived, strived for, and thrived.

Afghan generations have not given up on hope in all these difficult times and stand firmly behind their incumbent government, even if it does not fully comply with the tenets of human rights as perceived by the outside powers. There are concerns about the policies related to the role of women’s education and their participation in societal development. Yet, Afghan society is not prepared to live under foreign invaders under any circumstances.

Pakistani society is not as old as Afghan society and perhaps has a different way of life. The state and its people, since independence, have not lived under any foreign occupation physically, primarily due to the presence of its strong Armed Forces. Though it has had a number of wars and conflicts with its eastern neighbour, India, over unresolved disputes like Indian Illegally Occupied Jammu and Kashmir (IIOJK). However, the state has not been able to manage nor provide many of the other elements of human security for its extremely vibrant society.

The people of Pakistan are young and hardworking, and this has been seen in their contributions to the development of many countries: developing and developed, wherever they have gone either as temporary residents or permanent residents. Their contributions back home, in the form of, remittances are essential for the sustenance of Pakistan’s fragile economy.

Pakistani society is extremely compassionate and comes forward wholeheartedly in times of crisis, even if it knows that the state may not be that considerate of the needs of the people. Over the years, the people of Pakistan had accepted a certain way of life that may not have been ideal in a civilised world and true to its values and interests. However, the situation may be changing with the use of social media and growing awareness due to education and international travel by young people. The so-called Google kids have started to ask questions, first of their parents, teachers and now of the state on the provision of their fundamental rights.

The 21st generation of Pakistan is expected to bring a fundamental change in the outlook of our society in the future. Because the young generation now understands and insists that national security cannot be ensured without ensuring the fundamentals of human security and the well-being of the people which is extremely critical for the national security of Pakistan. It is important that the state also make efforts to ensure the provision of the basic needs of the people so that they are not exploited by enemies and swayed against their own homeland.