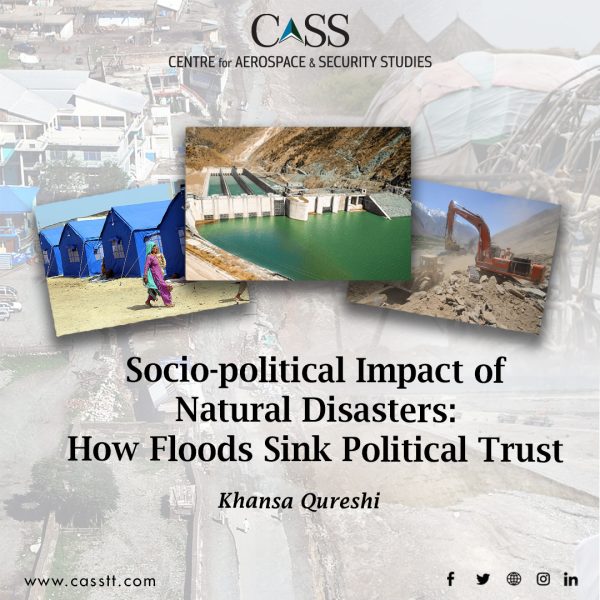 2022 unleashed climatic challenges of unprecedented scale in Pakistan as it experienced many extreme weathers over the year. The extremely high temperatures in March acted forebodingly for the much-awaited monsoon season. The intense rains starting from mid-June till late-August were three times heavier than the usual monsoon spells. In the aftermath of precipitation of this intensity, the country faced one of worst floods, with one-third of its land submerged at one point. These floods have claimed more than 1735 lives so far. Over 33 million people have been affected and 7.9 million were displaced. The infrastructural damages are also high with 2.1 million homes partially or fully damaged, 13,000km of roads, and 410 of bridges destroyed. As per estimates, the financial losses and economic damage have cost the country more than USD 30 billion, while another USD 16.3 billion are required to cover reconstruction costs.

Besides, stagnant flood water requiring at-least six months to recede, caused the spread of many skin and water-borne diseases. This, aggravated by their already existing socioeconomic distresses, has created a second wave of devastation for disaster-stricken people, leaving them in an absolutely miserable condition.

In such times, immediate relief operations are the only way to minimise sufferings. Pakistan’s civil society’s contributions in this regard are commendable, but the sheer scale of devastation cannot be managed alone. The main responsibility for post-disaster management remains with the government. Although, public officials claim to have acted efficiently, civil society and flood survivors believe otherwise. The reports surfacing about relief efforts are dismal. People living in destitute conditions in many large areas are still awaiting assistance.

Political trust is crucial for a state’s functioning as it incentivises citizens to follow rules of the land and become law-abiding citizens. It is also public’s belief in the government’s right to govern them that renders it legitimacy required to execute authority. In other words, political trust can be called as basic building unit of the social contract within a certain system. However, with the perception that there’s no protection rendered by the state, the social contract weakens, forcing citizens to think that they’re back in the ‘state of nature’, where the only law is ‘all against all’.

Given the above, Pakistan’s flood survivors can become vulnerable to exploitation by criminal networks, both due to floods and government’s negligence. They can grow sceptical of government as well as other citizens. This can reinforce the idea that the state is unable to protect them; forcing them to manage their own survival. But this mostly comes at others’ expense. Having lost financial resources and hope to get them back soon, survivors are already getting more inclined towards committing crimes, as was revealed as the reason behind the rising crime rate in Karachi. In such situations, citizens’ trust in each other also lowers, as they start perceiving others as hostile actors, indicating that declining political trust can also breed the decline in social trust.

The effect of declining political trust isn’t just confined to rising crime rate and lessening national cohesion, rather it has practical political ramifications too. At this point, the massive political upheaval in the country cannot be scientifically linked to inefficient flood-management. However, one can safely argue that the rising political popularity of Pakistan’s former Prime Minister may be the result of the government’s inefficient handling of state affairs. The protests also provide sufficient insight into possible consequences when the public perceive government as callous towards its citizens.

With Pakistan already facing a plethora of other challenges like dwindling economic profile, unmanageable inflation, and most worryingly, intensifying environmental emergencies making citizens anxious about quality of life, another possible impetus to declining political trust fuelled by disaster-management lacunae can transform uncertainty into instability.

While these difficulties are causing problems for authorities, they also provide a peek into the shortcomings that need to be addressed. Although, the extended period of rains caused the current intense flooding, the infrastructural and humanitarian catastrophes have mostly been the result of human mismanagement and lack of preparedness. At this point, the preparedness level in Pakistan for such events should be really robust as it was declared one of the most vulnerable nations to climate change a long time ago.

So first and foremost, the state needs to be fully prepared to manage such intense weather events by building climate-resilient infrastructure. This needs to be done both at mega-level such as for dams, canals, river embankments etc., as well as for building climate-resilient infrastructure for public usages such as commercial constructions and housing colonies. The government should also ensure that livelihoods of its citizens are climate-resilient and they’re readily able to adapt in cases of disasters. Following the flood crisis, policymakers must ensure that the destroyed infrastructure and livelihoods are rebuilt at the earliest while keeping in mind the impact of climate change on those structures. Similarly, millions of displaced people must also be rehabilitated as soon as possible to prevent a migration crisis.

In essence, making people realise that the state cares for their well-being is the only way out of the current predicaments that Pakistan is embroiled in. Governing citizens who perceive that they are helpless is a recipe for a national disaster, the fallout effect of which can have the most consequential impacts for the entire state.

Khansa Qureshi is a Research Assistant at the Centre for Aerospace & Security Studies (CASS), Islamabad, Pakistan. She can be reached at cass.thinkers@casstt.com.