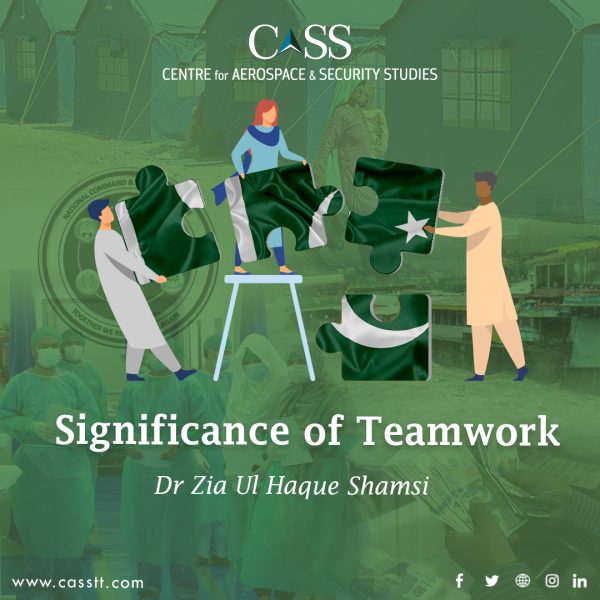 The word “Teamwork” reflects the collaborative effort and the collective wisdom of a group of people to accomplish a common goal. It provides an equal opportunity for all members to contribute significantly towards the achievement of the assigned tasks.

The question arises of the need and significance of this topic in the prevalent environment. My argument is that Pakistan’s work culture is dominated by individualism and, hence, faces the dilemma of underachievement and over-projection. Therefore, it is necessary that this aspect is discussed, and the cultural syndrome of individual glorification is discouraged. This does not mean that I am trying to demean the importance of leadership, but only asserting the need for team building by leaders and then working in synergy to accomplish the desired objectives.

Teamwork usually not only helps in the successful accomplishment of a task but also ensures near-equal distribution of work and shared responsibility of the team. Recalling the modern-day concepts of Project Management, which dates back to the first large project launched during World War II: Project Manhattan, emphasised sharing of ideas, responsibility, and rewards. Led by Robert Oppenheimer, a physicist, the Project was ‘responsible for the research and design of an atomic bomb.’ Since the project was large, complex, and secret, a large team comprising a variety of workforce was created that included scientists, engineers, technicians, constructionists, and even politicians.

The need of building a team, even for smaller projects, cannot be over-emphasised due to inherently inbuilt benefits for the accomplishment of the task. In fact, teamwork in any organisation or for a specific project is the most effective MEDICINE for success.

Teamwork creates Motivation and acts as a force multiplier among all the colleagues engaged towards the accomplishment of the specific task. It generates Enthusiasm to do well and meet the timeline. Teamwork also inculcates Discipline due to strict monitoring of the execution of the assigned tasks. It also ensures the Integrity of the institutions and individuals, which is extremely important for the Credibility of the whole process. Teamwork ensures Integration and synergetic application of ideas, and beliefs, which is extremely important for the fulfilment of the desired objectives. The beauty of teamwork is that each member could be Nonchalant in their approach and contribute in their own capacity without compromising or jeopardising the accomplishment of the task. Finally, teamwork creates Equal opportunities for each participant to perform and impress upon the leadership his/her abilities and capacity of doing better, thereby promoting a healthy competitive environment that could ultimately help in the efficient working of the institution.

The purpose of explaining the intangible benefits of teamwork was to highlight its significance for the accomplishment of tangible results.

Individualism has become so prominent in our society and the familiar mantra that, “I have done it,” is not only causing stress at the workplace but also results in reduced output. The under-command colleagues feel deprived of due credit and perhaps do not make suitable contributions that they are capable of. This becomes evident in the sports field, political parties, government departments and even in the entertainment industry.

However, a positive outcome can be seen whenever a team was formed and assigned specific tasks. For instance, the formation of the National Command and Operation Centre (NCOC) was crucial in the policymaking and execution of Pakistan’s strategy for handling the COVID-19 Pandemic. The output and contributions of NCOC, through a proactive and interactive approach to a global crisis, were acknowledged internationally. The experiment was so successful that there were demands of establishing another NCOC to deal with the devastations caused by the recent super floods, which affected more than half the country’s area.

Likewise, the establishment of a Committee to deal with the stringent conditions imposed by the Financial Action Task Force (FATF) that had placed Pakistan on the grey list on June 28, 2018. Although it was not formally announced unless the objectives were achieved, however, the Committee worked relentlessly and in synergy with a number of governmental departments, including the legislature, to meet FATF requirements and helped Pakistan out of the grey list on 21 October 2022.

These two examples from recent times are aimed at making policymakers understand the significance of teamwork, under an able leadership with specific tasks. Remember, Pakistan needs leaders at all tiers who can build a team, lead them from the front without claiming to be the sole achievers, and produce results that are desired in the national interest.