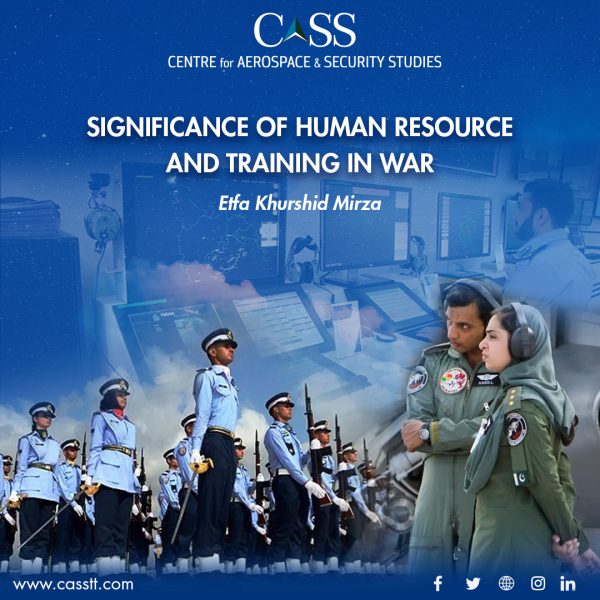 “Their exercises are unbloody battles, and their battles bloody exercises.”

Winning a battle requires a multitude of elements. One of the most crucial elements is human resource development. The ultimate goal of training is to succeed in fights and engagements with the least possible loss of life as well as the least expenditure of national resources. Going back in history,in the Indo-Pak air war of 1965, it was the training that made Pakistan Air Force victorious. If we compare the two,the Indian Air Force (IAF) was three times in size than Pakistan Air Force (PAF). However, PAF pilots, despite being smaller in size, made their name in history. This is because of the highest training standards and human resource development.

The Pathankot Air Base attack on September 6 was one of the most successful attacks in the history of air battles because the PAF, despite lacking sophisticated equipment, destroyed 13 enemy aircraft. Jagan Mohan and Samir Chopra in their book “The India-Pakistan Air War of 1965” stated that the Indian Government officially acknowledged that the Indian Air Force had lost around 70 aircraft in the 1965 air battle. Thanks to the PAF leadership’s vision, the pilots’ mastery of flying, and the highest standards of training.

Training, team spirit, and discipline go hand in hand. The father of the nation, during his visit to Royal Air Force Academy in 1948, also emphasized the same. His words “I know also that you are short of aircraft and equipment,……., but aircraft and personnel in any numbers are of little use unless there is a team spirit within the Air Force and a strict sense of discipline prevails. I charge you to remember that only with discipline and self-reliance can the Royal Pakistan Air Force be worthy of Pakistan” are like a guiding principle for Falcons of the PAF.

Warfare is constantly evolving and changing. Therefore, military training must also adapt. Both in comprehending how warfare is changing and in modifying training to meet those challenges, it must constantly be forward-looking, inventive, and aggressive.  According to Sun Tzu ‘Water shapes its course according to the nature of the ground over which it flows; the soldier works out his victory in relation to the foe whom he is facing’. Keeping in view the Indian military advancements, particularly in the air force such as purchasing advanced aircraft and other equipment, Pakistan needs to adapt itself as well. Recognizing the need, PAF is updating and modernizing its capabilities to prepare for the challenges of the future. One such example is the purchase of J-10C aircraft and the most recent PL-15 missile technology from China.

Concerning the military advancements and developments in emerging technologies, the utilization of developing disruptive technologies is a key component of the modernization of warfare that technology may bring about. In addition to technological innovation, employment tactics are also important. These technologies and how they are applied in upcoming conflicts matter the most because of the changing security environment in the context of India and Pakistan. In this regard, the nation with a stronger employment plan will survive the competition, both offensively and defensively. The best training, frequent military exercises, and wargames during peacetime all contribute to an excellent employment strategy. In order to prepare its aviators for survival in a crisis, the PAF makes sure they receive the greatest training possible during peacetime.

PAF pilots have made a name for themselves in aviation history, and even today, they are working hard to uphold the standards set by their predecessors. Every officer, airman, and cadet in the Air Force put in the unceasing effort and never-ending desire to establish PAF during its formative years and has continued to do so. Everyone witnessed the proof in February 2019 during Balakot strikes episode. The nation is justifiably proud of its Air Force as an invincible shield of the country’s airspace since Quaid’s aim of establishing the PAF as second to none swiftly came true.

Etfa Khurshid Mirza is a Researcher at the Centre for Aerospace & Security Studies (CASS), Islamabad, Pakistan. Her area of interest is warfare and emerging technologies. The article was first published in Pakistan Observer. She can be reached at cass.thinkers@gmail.com.