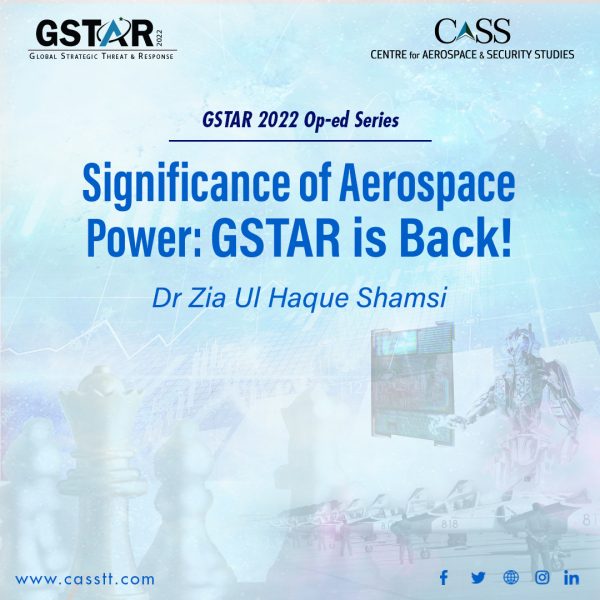 The Centre for Aerospace & Security Studies (CASS) is organising the Second Edition of its flagship International Conference ‘Global Strategic Threat & Response’ (GSTAR) on 19-20 October 2022. The first GSTAR was held on 4-5 March 2020.

This year’s conference is being held at a time when the global threats related to climate change, Pandemic recovery, enhanced activities in space, and concerns for energy and food security due to the ongoing Russia-Ukraine war, are unprecedented at national, regional, and international levels.

This article is aimed at highlighting the significance of this year’s GSTAR at each level mentioned above. At the national level, Pakistan is faced with the adverse effects of climate change and presently 60% of areas and over 33 million people are in dire need of rescue and rehabilitation due to unprecedented torrential rains and flash floods. It is estimated that the financial losses may reach the tune of USD 40 billion. Moreover, the sowing of next season’s crops is being delayed due to the non-availability of agricultural lands and there is a danger of acute food shortages in the coming months.

At the regional level, the situation in Afghanistan remains highly uncertain because the global powers are unwilling to recognise the Taliban regime even after passing over one year since they took control of Kabul, peacefully. Afghanistan faces a severe shortage of funds to provide governance and basic amenities to its 60 million people who have endured four-decade-long wars and conflicts. Another winter is approaching very fast causing concerns for food and shelter to millions of poor Afghans, but unfortunately, the global powers responsible for the country’s massive destruction are busy supporting Ukraine, perhaps in a similar way as in Afghanistan. Sri Lanka is still reeling from politico-economic crises after having defaulted on international commitments. India continues to oppress its Muslims and other religious minorities in general and the people of Jammu & Kashmir (J&K) in particular. The end of the Yemen war is not in sight, and people are faced with the worst humanitarian crisis due to a lack of food, energy, and essential supplies.

In Europe, the war has entered the seventh month and the US-led allies’ support for Ukraine is being detested by Russia’s President Putin who has already annexed at least four liberated or captured regions. Obviously, Putin’s actions have been denounced by the United Nations Chief as well as a majority of Ukraine’s supporters. President Biden has sharply reacted to Putin’s nuclear threats and declared it the most serious situation since the Cuban Missile Crisis of 1962. Biden has warned that the world might be heading towards an unthinkable Armageddon.

Since Russia and Ukraine are two of the largest energy and food producers in the world, there are growing concerns about acute energy shortages in most European countries in the coming winter. Likewise, food security will come into question, particularly with respect to wheat shortages in many countries, including Egypt, Pakistan, and most Middle Eastern and African countries.

In the aerospace domain, Pakistan’s nuclear neighbour India, is now a strategic partner of the US, after signing the Basic Exchange and Cooperation Agreement (BECA). This enables it to have access to state-of-the-art communication and surveillance with real-time pictures for intelligence and targetting during any future conflict and crises with Pakistan and China. BECA’s real beneficiary would be the Indian Air Force (IAF), which has been vying to attain the status of an Aerospace power for a long time now.

Coming back to the significance of GSTAR being organised by CASS, the conference aims to explore these Evolving Global Order: Challenges and Opportunities. This year’s conference has four working sessions, besides the inaugural and closing sessions, which will be presided over by distinguished personalities. These sessions will be spread over two days and cover an expanded agenda comprised of International Security Environment, Geo-economics, Emerging Technologies and Future Warfare, and Aerospace Security. Distinguished speakers from New Zealand, Canada, China, Germany, Latvia, the UK, the US and Pakistan will be participating with an aim to identify, examine, and recommend response options to the practitioners to counter growing threats to humanity and planet Earth. Hence, the presentations and discussions in each session are expected to contribute towards recommendations for strategic decision-makers in general and the National Security Division in particular.

The writer is the author of the book ‘Nuclear Deterrence and Conflict Management Between India and Pakistan’. He is presently working as the Director of the Centre for Aerospace and Security Studies (CASS). The article was first published in Daily Times. He can be reached at cassthinkers@gmail.com