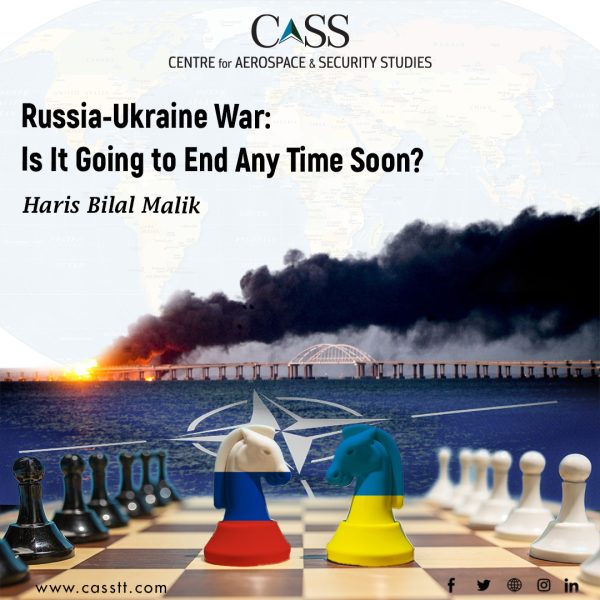 The year 2022 has been significant as far as the international security environment is concerned. Whether it is NATO and Russia in confrontation in Europe, or the United States (US) and China, trying to play against each other in the Asia-Pacific region, the overall international security environment appears to have deteriorated, specifically against the backdrop of increasing great power contestation. It has been more than eight months since the Russia-Ukraine war broke out. Since then, it has emerged as an important agenda of international security discourse and there have been various speculations regarding where the war is headed, its intensity, how it is going to end and more importantly, when.

Regardless of the speculations, instead of coming to an end, this conflict has become even more complicated and appears to be escalating further. For instance, a bomb explosion on the Kerch Bridge, that partially destroyed it, caused a major setback for the Russian military campaign. The bridge connects Crimea with mainland Russia and was a major supply route for the Russian forces fighting in Ukraine. It was also the longest bridge in Europe built by Russia in 2018 and symbolic of her earlier annexation of Crimea in 2014. The explosion was termed an ‘act of terrorism by Vladimir Putin and has now provided Kremlin a pretext to intensify its military campaign across various cities of Ukraine.

In the same vein, the Russian military’s excessive bombing of the Ukrainian capital Kyiv and other cities against the backdrop of the attack on Kerch Bridge, which Russia believed was backed by Ukraine, has also intensified the war. This has also brought massive worldwide criticism for Russia, especially considering the killing of innocent civilians. Russia has also annexed four regions of Ukraine – Donetsk, Lugansk, Zaporozhe, and Kherson. Subsequently, Russia held a referendum in these regions, in which, according to her state media, a vast majority of people voted in favour of annexation. However, the international community rejected this claim and called it a forced and illegal annexation. Even the United Nations General Assembly, in a resolution, condemned this Russian annexation of Ukrainian territories as an ‘attempted illegal annexation’, and demanded an immediate reversal.

Likewise, the nuclear element in the Russia-Ukraine war is also significant. At the start of the war, the Russian nuclear deterrent forces were put on high alert status. Even now, after several months, the nuclear element continues to factor in. President Putin has been accused of threatening the use of nuclear weapons. Even President Biden has termed the situation as presenting a risk of a nuclear ‘Armageddon’ at levels unprecedented since the 1962 Cuban Missile Crisis. However, President Putin has denied any Russian intention to use nuclear weapons.

Despite accusations and denials, nuclear signalling is clearly at play. Both NATO and Russia recently conducted nuclear exercises. Notwithstanding their aims and objectives, one thing becomes quite apparent – the nuclear element is significant in the Russia-Ukraine war.

This conflict in Europe has emerged as the most significant issue dominating the international security environment and has strengthened great power contestation. Even though the war has remained confined to the borders of Ukraine, the risk of escalation continues to persist. Given the various factors discussed earlier, and apparent lack of attempts at backchannel peace talks between the major stakeholders, it seems like the war is not going to end any time soon. Unfortunately, like any violent conflict in the world, this war will have long-lasting impacts at the global and regional level, with the citizens on either side being the worst sufferers.

Haris Bilal Malik is a Research Assistant at the Centre for Aerospace & Security Studies (CASS) in Islamabad, Pakistan. This article was first published in Global Village Space. He can be reached at cass.thinkers@casstt.com.