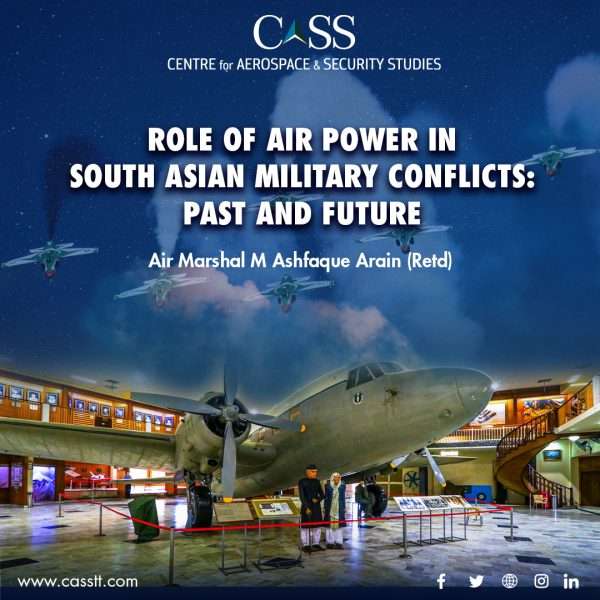 The 1965 War between India and Pakistan set the pace of air battles in South Asia with professional and heroic performance of Pakistan Air Force pilots. All personnel of its flying, technical and other branches displayed professional competence, leadership, and courage in the discharge of their responsibilities. The PAF, despite its numerical inferiority, emerged as a winner against a three times larger adversary. PAF’s initial onslaught in which it destroyed four IAF Gnats, put the IAF on the defensive forcing her to ground all 130 Vampire aircraft. Ascendency gained right at the beginning continued till end of the war and helped Pakistan’s land forces in accomplishment of their offensive and defensive operations.

During the war, PAF aviators displayed very high standards of professionalism, exemplary leadership, and innovative skills.  Air Marshal Nur Khan, the then Commander-in-Chief of the PAF, personally undertook aerial reconnaissance of the border areas to assess the Indian preparedness and intent. Squadron Leader Sarfraz Rafiqui despite his guns being jammed, did not return back, and continued to provide cover to his formation members and embraced shahadat (martyrdom). MM Alam set a world record by shooting down 5 IAF Indian aircraft in a short and quick engagement. PAF’s transport fleet converted and employed its C-130 aircraft for night bombing to partially offset IAF’s numerical superiority. PAF’s B-57 bomber aircraft flew as deep as Agra to create deterrence. Looking at the entire war, we find no dearth of heroic acts by PAF pilots.

The courage, professionalism and leadership displayed by the PAF aviators, continues to guide PAF’s successive generations. This has enabled PAF in discharge of its responsibilities professionally and with honour.

PAF’s performance in the 1971 War was equally commendable. The only PAF squadron based in Dacca continued to inflict losses on the IAF even with damaged runway and other allied facilities. The operations ceased only when the runway became unusable. More recently, PAF displayed its exemplary professionalism and planning skills when it responded to IAF’s sneak night attack with a broad daylight operation and shot down two IAF aircraft. Even during 2001/2002 stand-off and 2008 escalation in the aftermath of Mumbai attacks, PAF’s preparedness was instrumental in deterring India from taking any aggressive steps. PAF also has the credit of shooting down Israeli and Soviet aircraft without incurring any loss.

IAF’s repetitive failures over the years highlight weaknesses in her training, developmental and modernisation strategy as well as lack of understanding employment of the force. This was proven by late General Bipin Rawat’s comments relegating IAF to a supporting arm like artillery.

In the aftermath of IAF’s mediocre performance on 27February 2019, and later using border skirmishes with China to exploit US fears of Chinese rise, the Indian government supported IAF for hastened acquisitions of weapon systems from wherever available and at whatever cost.  These hurried acquisition include Rafale fighters from France, S-400 Ballistic Missile Defence System from Russia, and many other systems from multiple other sources. IAF also went on a spree for upgradation of existing systems. Recently inducted indigenous aircraft carrier in the Indian navy further increases India’s air power employment options against Pakistan.

Indian government has taken full advantage of US fears of Chinese rise to extract diplomatic, technological and defence equipment support from Washington. The US is compelled to support India despite Indian defence acquisitions from sanctioned entities as well as BJP’s human rights violations. Indian inclusion in the two Quads and agreements such a BECA and LEMOA etc. will be greatly helpful to Indian Armed Forces during any future wars. Indigenous work as well as technological support from other countries, is also enabling their capability of utilising emerging technologies such as AI, cyber, drones and hypersonic missiles etc.

Indian military acquisitions in general and IAF acquisitions especially when viewed in the context of US and Western technological support are bound to disturb the balance of power and embolden the hardliner regime in New Delhi. This will result in both, an arms race as well as create strategic stability dilemma in a volatile region with three nuclear armed states.

The modern world is averse to military conflicts, especially between nuclear rivals. India’s emphasis on modernising the IAF is also suggestive of future military conflicts in the South Asian region, which are likely to be short, intense and destruction oriented, necessitating the lead role as well as greater employment of air power. This would require doctrinal and strategic shifts.

PAF’s current leadership is cognizant of the Indian acquisitions as well as possible conflict scenarios. It has, however, chosen to avoid an arms race. PAF leadership instead, took a stock of the evolving situation and assessed the future aerial warfare in the subcontinent. Based on its assessment of future requirements, it opted to reorganise the air force, adapt to changing training requirements and opted for bare minimum acquisitions. The only new induction in recent years is a squadron of J-10C aircraft. Considering the role emerging technologies would play in future conflicts, PAF leadership has also decided to indigenously develop these technologies. PAF, keeping up with its traditions and professional performance, will surely produce innovative employment options to effectively respond to any challenges in the future.

Air Marshal M Ashfaque Arain (Retd) is Advisor to Chief of the Air Staff on CASS Affairs and is also Director of the Emerging Technologies programme at the Centre for Aerospace & Security Studies (CASS), Islamabad, Pakistan.