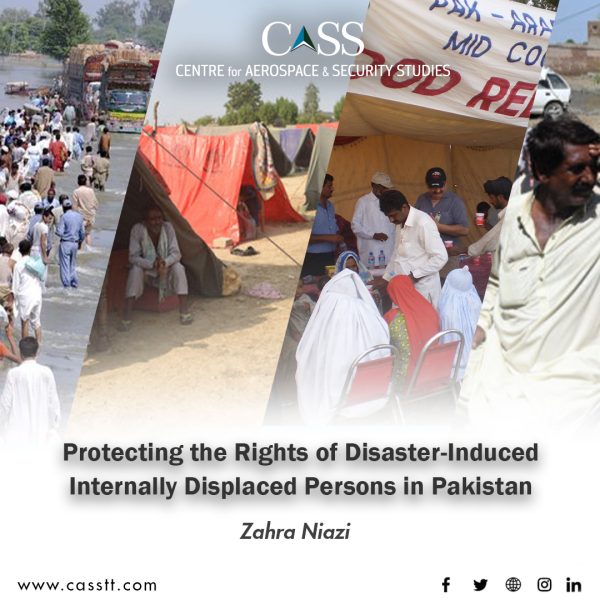 In Pakistan, millions are being forced to leave their homes. They are not fleeing conflict but are persons internally displaced from the effects of arguably the biggest global threat of the 21st Century – climate change. Since the beginning of Pakistan’s deadly floods in mid-June, at least 7.9 million people have been displaced, which is appalling, to say the least. Even this could be a conservative estimate given the colossal damage the floods have caused.

Many of these people have lost everything – their homes, sources of livelihood, and prized belongings. These flood-induced internally displaced people now face an uncertain future, as there is no specific national legislation or policy framework that can guarantee long-term protection and assistance to them.

This is regrettable as recent history in Pakistan is marked with a series of disaster-induced displacement crises. In 2010, massive floods displaced 11 million people, while another four million were displaced following the 2011 floods in Sindh. A report published by Oxfam in 2019 revealed that the communities who permanently moved to Karachi from Badin, Thatta, and Sajawal after the floods of 2010 were forced to settle on the outskirts of Karachi, where they lacked access to utilities. Nearly a decade on, they continued to live under poor and squalid conditions, which exemplifies the consequences of the lack of specific instruments that can offer long-term protection and assistance to people displaced by disasters.

In 2021, the IDMC reported that a third of all disaster-induced displacements in 2020 occurred in the South Asian region, with Pakistan recording the third-highest number of those displacements after India and Afghanistan. Additionally, the World Bank forecasts continued to stress the forthcoming crisis of climate change and internal displacement in South Asia. Hence, we were cognizant that disasters would continue to force millions to dislocate in Pakistan but did not grant legal recognition and rights to those dislocated during disasters or formulate comprehensive policy frameworks to guide the national response in such situations.

At the international level, the rights of Internally Displaced Persons (IDPs) are covered under the Guiding Principles on Internal Displacement of the Office of the High Commissioner for Human Rights. These principles serve to ensure that the rights of displacement-affected communities are not violated and guide national and international responses in such situations. However, it does not confer any obligation on the states, with national authorities having the primary duty to provide humanitarian assistance and protection to those in need in times of crisis. A number of states today have incorporated these principles into law or employed them as the basis for policy formulation. Some cases in point are Sri Lanka, Colombia, Georgia, Burundi, Armenia, Angola, Peru, Uganda, and the Philippines.

In Pakistan, however, a legal limbo with regard to the recognition of the rights of disaster-induced IDPs continues to exist. At the same time, no specific policy document comprehensively addresses internal displacement or disaster-induced internal displacement specifically. Pakistan launched its first National Climate Change Policy (NCCP) in 2012 and its follow-up Framework for Implementation of Climate Change Policy (2014-2030) in 2014 – both of which remain silent about disaster-induced displacement. In March 2022, the Ministry of Climate Change (MoCC) launched an updated version of the NCCP. However, as welcome as this development was, the policy pays cursory attention to displacement by mentioning ‘increased climate change-induced migration’ as one of Pakistan’s vulnerabilities to climate change threats. It does not specify policies or actions to guide durable solutions, including the return, resettlement, or reintegration of those forced to dislocate due to calamities. This gap is also evident in the country’s National Disaster Risk Reduction Policy and the National Disaster Risk Management Framework.

One can now hope that the massive humanitarian crisis amid the devastating floods will be a catalyst for reassessing how we want to move forward and shift away from the status quo. The necessity of implementing innovative and practical resilience-building and risk-reduction strategies, ideally through a community-led approach, is a need of the hour.

The government, through collaboration with provincial authorities and civil society, must now also begin work on developing an effective national framework to deal with and protect the rights of those already displaced amid the devastating floods. This framework should serve as the basis for a more comprehensive policy guide in the long-term to respond to displacement – whether due to sudden disasters or ‘slow onset’ impacts of climate change – to guarantee the rights and dignity of these vulnerable individuals and communities at all times. It is equally important to grant legal recognition to disaster-induced IDPs which can effectively guarantee their rights. The crisis must serve as a long-forgotten reminder that we can no longer continue with the status quo.