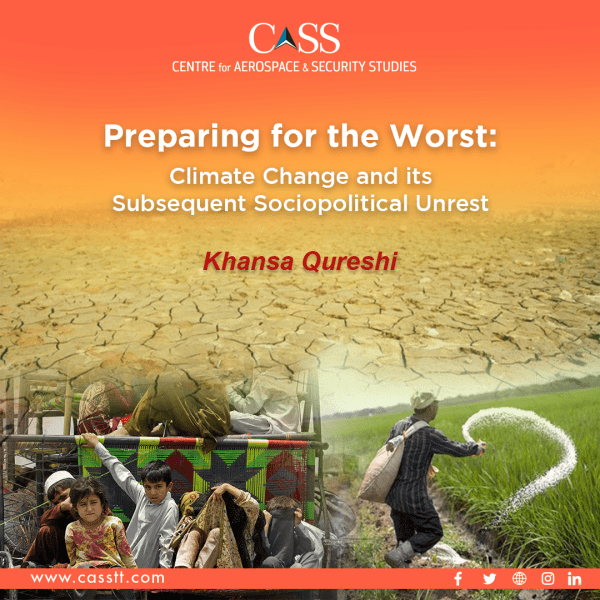 Pakistan is ranked as the 8th most vulnerable country to climate change according to the Global Climate Change Risk Index 2021. Although the country improved its vulnerability ranking as compared to the previous Index by Germanwatch, it still remains in the list of the top 10 most vulnerable countries. The report reveals that during the 173 climate-related extreme events that occurred over the study period of the report, i.e., 2000 to 2019, Pakistan suffered huge economic losses. It lost around USD 3.8 billion every year from 2000 to 2019, with a GDP loss of 0.52% per unit annually.

Climate-related weather events with varying impacts on different regions have the potential to affect the masses in economic as well as political ways. Pakistan is primarily an agricultural country. The agricultural sector is responsible for 19.2% of the country’s GDP, accommodating around 38.5% of the labour force, with 65-70% of the population depending on agriculture for its livelihood. Unfortunately, Pakistan has been facing loss of crops, livestock, fisheries, and forestry in climate-related events such as floods, droughts, heatwaves, and glacial lake outbursts over the last many years. While these losses are set to cause direct future economic losses and food insecurity, they are also forcing people relying on this sector traditionally to move towards cities as they are losing their livelihoods.

However, cities in Pakistan are already grappling with double-digit poverty, with many facing administrative, social, economic, as well as environmental and other problems. The overpopulated urban centres, unemployment, housing deficit, inflation, and the ever-rising cost of living are making the lives of urban Pakistanis difficult. In such circumstances, any more saturation can lead to societal unrest. This may happen as an exodus from rural to urban centres can stress existing social, economic, and political conditions. A report by Grantham Research Institute on Climate Change and the Environment shows that bigger populations in cities affect the distribution of resources such as livelihoods, water, and food leading to conflicts. These conflicts can range from inter-community to inter-state levels. Similarly in Pakistan, with poorly-equipped cities barely catering for the urban population, any further stretch of resources to take care of the needs of migrants can cause apprehensions against them. Unavailability of housing due to rampant deficit can lead to sprawling slums and ghettoization of cities impacting the quality of life. Meanwhile, scarce food and limited employment opportunities can force many to resort to crimes to fulfil their needs.

According to the UN Population Division, 50% of Pakistan’s population will move to urban centres by 2025. However, unplanned and forced relocation towards Pakistan’s already stressed cities will further aggravate the climate risks. For a country with scarce national resources, unstable governance, and acute lack of community resilience to disasters, climate change induced migration can stir difficulties.

Economic or other disruptions caused by climate change faced by one group may heighten discrimination leading to further grievances. For example, food scarcity caused by climate change can trigger negative sentiments against the government, leading to protests, and hence, instability. The current political polarisation can also act as a catalyst to deepen this instability.

The world has already seen the Syrian conflict triggered due to mass migration to the country’s urban centres over climate change-induced food insecurity. Agricultural lands were devastated, while large swathes of land succumbed to desertification. Some 800,000 people lost their income, while, across the entire country, 85% of the livestock died. As per experts, the Syrian war serves as one of the very first examples that already existing social, political and economic anomalies can be exacerbated by climate change.

The recently released third part of the Intergovernmental Panel on Climate Change (IPCC)’s sixth assessment report warned that the ‘world is fast heading towards the tipping point after which humans won’t be able to adapt.’ Pakistan is set to face higher temperatures than the global average. But the onus is on the government as to how it prepares the state and the citizens to respond to such threats which will decide the country’s fate.

Pakistan’s past, as well as newly appointed, Ministers for Climate Change recognise the gravity of the matter, but it remains to be seen how much space effective climate policymaking is given under the current stressful economic dynamics. It must be kept in mind by all stakeholders that the ability to adapt to climate change is the only way forward for the country’s survival. All political and other maneuverings entirely depend on the nation’s ability to navigate through the tough times that climate change is bringing.

Khansa Qureshi is a researcher at the Centre for Aerospace & Security Studies (CASS), Islamabad, Pakistan. The article was first published in Global Village Space (GVS). She can be reached at cass.thinkers@gmail.com