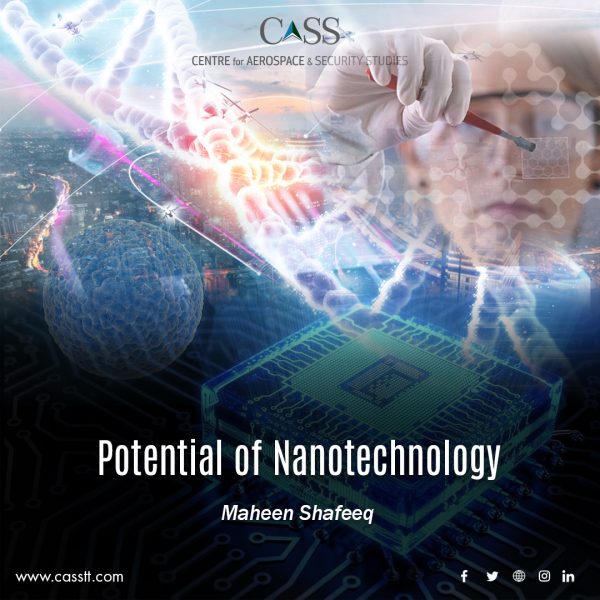 Emerging technologies such as AI, robotics and cyber have been in the limelight in defence and military domains since the 1950s; however, nanotechnology has not had a fair share of publicity. The global nanotechnology industry has a rapidly expanding market with an estimated worth of USD 2.4 billion in 2021 and is forecasted to reach USD 33.7 billion by 2030. This is due to the growing use of nanotechnology in various sectors such as urban farming, precision agriculture, medical, engineering, energy, security, defence, environment etc. While nanotechnology has proven tremendously beneficial for the civilian sector, it has valuable offerings for the military industry as well.

Nanotechnology is being used to develop nanoweapons which are miniaturised versions of weapons ranging from about 1-100 nanometres. A practical example of this is evident in the reduction of drone size from about 4 feet to the size of a honey bee. Such weapons would fit in the bags and pockets of the soldiers. Louis A. Del Monte, in his book ‘Nanoweapons: A Growing Threat to Humanity’, commented on the size of nanoweapons and termed them ‘nanobots’ with destructive potential.

The reduced size and enhanced spectrum of nanotechnology have allowed the development of highly sensitive nano-thermal and chemical sensors that can be of great value to military operatives. Nano-communication devices can be an effective tool for surveillance missions. For instance, nanotechnology has allowed video tracking and monitoring using 35x optical zoom nano multi-eye lens, real-time nano-radar and nano-eye cloud storage. Such technologies could be helpful for militaries to operate even in bad weather conditions and work around blind spots. Additionally, nanocomposite materials have good potential for the aerospace industry due to their lightweight and extended durability under high pressure and at high speed. Nanotechnology could also significantly impact space-based intelligence, communication, imaging and signal processing. In the longer run, most military technologies would be dependent on nanomaterials. Nanotechnology is also being evaluated for its use in unmanned platforms and robots. The applications of nanotechnology could also enable the development of  mini-nukes, weighing about five pounds and carrying an explosive power of 100 tonnes of TNT. Such an evolution in weapons can provide a competitive edge to the militaries around the world

To ensure a competitive edge, arms exporters are under tremendous pressure to outrun the others in winning this global nano-arms race. There is significant competition between the United States (US) and China in nanotechnology. By comparing the two countries’ progress in nanotechnology using documented and published research, it can be established that China is ahead of the US, with more than 42% of globally published research articles (about 85,700) on nanotechnology. However, Louis A. Del Monte, in his book titled ‘Genius Weapons’, claimed that the US enjoyed a ‘substantial lead’ in nanoweapons. He stated that this was a critical component of its ‘Third Offset Strategy.’ Conversely, he was also wary that the world would catch up with the US’ technological developments within a few years. Countries like India, Iran, South Korea, Germany, Japan, United Kingdom (UK) and Russia have shown great interest in nanotechnology.

India, in particular, is right behind the US and China in nanotechnology. Indian Defence Research and Development Organization (DRDO) has established several nanotechnology research institutes to pursue interdisciplinary research. Institutes such as the Centre for Nanoscience & Nanotechnology (UIEAST)  in 2005, Centres of Excellence in Nanoelectronics (CEN) since 2006, Centre for Nano Science and Engineering (CeNSE) in 2010, Nanoscience Centre for Optoelectronics and Energy Devices (Nano-COED), and several other research labs are working in various areas of nanotechnology. Furthermore, India is also the third-largest producer of research papers on nanotechnology, behind China and US. Additionally, employees of DRDO have published books on the subject, such as a book on ‘Nanotechnology for Defence Applications’, which discusses the potential of nanotechnology for the defence sector. The Indian defence forces have been eager to deploy nanotechnology on the battlefield and are working to propose a blueprint for its use in future warfare.

The Government of Pakistan founded the National Commission on Nano Science and Technology (NCNST) to assist universities and research centres in establishing nanoscience labs. There is tremendous potential for the development of nanotechnology in the private sector. Moreover, there are a few universities that have established research centres to conduct nanotechnology research. Despite these initiatives, the potential of nanotechnology in Pakistan has not been explored fully. Apart from lack of capital and human resource, Pakistan’s weak patent distribution is also one primary reason for this lag. The concentration of patents within the weapon-developing states limits the interested states such as Pakistan. To address this bottleneck, there is a need to fund the representation of Pakistani patents at international nanotechnology conferences and markets. This would assist in securing space for learning and sharing of knowledge as well as prowling commercial contracts, which could become a great source of revenue for Pakistan. Although less spoken of, nanotechnology is a fast-emerging province of knowledge and could significantly impact the future of warfare across the globe.

Maheen Shafeeq is a researcher at the Centre for Aerospace & Security Studies (CASS), Islamabad, Pakistan. She holds a master’s degree in International Relations from the University of Sheffield, UK. The article was first published in published in Modern Diplomacy. She can be reached at cass.thinkers@gmail.com