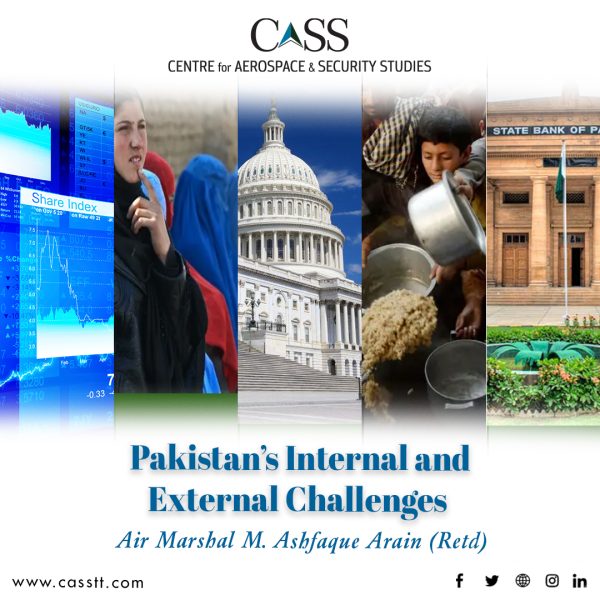 Pakistan is facing two serious challenges, one on the internal front and the other at its borders. While these appear to be unrelated, when seen together, have serious implications. On the external front, in addition to provocative and belligerent statements by the Indian leadership, the situation is worsening on Afghan border. Internally, there is political instability, division in society, economic chaos and law and order situation.

Both, the developments inside Afghanistan and situation on the Pak-Afghan border are very disturbing. The security situation in the country is deteriorating. Afghan Taliban’s intent and capacity to govern are being questioned internationally. Despite having been in power for over 15 months, their government has not been recognised. Barring limited humanitarian assistance, this has also led to non-availability of funding to meet people’s needs. Deteriorating economic conditions provide a ripe ground for poor law and order situation.

Human insecurity has reached crisis levels in terms of hunger, poverty, underdevelopment, lack of educational opportunities and targeted ethnic and gender-based discrimination. Ethnic discrimination and women’s right to education and work as well as public executions and lashing are becoming serious international concerns, reminding the world community of previous Taliban rule. The United Nations has also raised its concerns on the legitimacy and functioning of the justice system. These developments, especially women’s education and freedom are also being projected as Taliban’s failure to fulfill the commitments made at the time of their takeover of the country after US departure.

The situation on Pak-Afghan border is becoming from bad to worse. Damaging as well as removing parts of the border fencing was a serious issue as it, in addition to increasing chances of smuggling, also facilitates cross-border movement of terrorists. Increase in terrorist attacks on Pakistan’s Law Enforcement Agencies is suggestive of the effects of a weak border control mechanism as a result of the damaged / removed fence.

The Taliban government in Kabul is selective in dealing with the terrorist and extremist groups. While taking steps against few, the Taliban continue to shelter a number of other extremist and terrorist groups that pose a threat to regional and global security, Tehrik-i-Taliban Pakistan being one. As a result, in the recent past, there have been reports of increased TTP activities inside Pakistan along the Pak-Afghan border. The attack on our embassy in Kabul came in the wake of TTP calling off its ceasefire. The attack on a hotel housing many Chinese businessmen and attack on the Russian embassy in September suggests selective targeting of those who threaten US interests. The number of clashes between Pakistani and Afghan forces as a result of unprovoked attacks are also on the increase, the latest one claiming the lives of seven Pakistanis in Chaman area.

Despite accepting better law and order situation, the Western governments and media are building a new narrative to highlight women rights, girls’ education and harsh Islamic punishments. International consensus is gradually moving against Taliban’s hardline approach and failure to keep their promises. Recently, Ned Price also hinted that the US could contemplate taking action against terrorists in Afghanistan. All these developments suggest the US’ keenness to once again play a military role in Afghanistan. Killing of al-Qaeda leader Ayman al-Zawahiri in a drone strike in Kabul is one such example.

On our internal front, despite the government’s claims, Pakistan’s economic situation is turning precarious with every passing day. All economic indicators are discouraging to say the least. With all kinds of curbs on imports and restrictions on transfer of money abroad, foreign exchange reserves are falling; the latest figures suggest the reserves have fallen below seven billion USD. The IMF doesn’t seem to be willing to negotiate with the government. Without IMF consent, no friendly country is likely to provide any loans. With such a precarious situation, the debt payments are looming large, with no visible solution.

Closing down of manufacturing units and slowing down of businesses is resulting in job loss for a large number of people. The textile sector alone has laid off 150,000 people in recent months. This is resulting in individuals losing hope in securing jobs as indicated by a recent PIDE survey. The results of the survey suggest that 37% Pakistanis making almost 900 million people, if given an opportunity, are willing to move abroad because of the poor economic condition. This includes 62% young people between the ages of 15 to 24 years.

Owing to continued political uncertainty in the country, the government is unable to focus on governance. There is no visible effort for the rehabilitation of the flood affectees who are now facing a severe winter. Government’s failure to maintain checks has provided traders with an opportunity to charge prices of daily commodities at will leading to further discontent in the public.

Superimposing Pakistan’s internal challenges and external threats along with US requiring support for military action inside Afghanistan, our situation will once again put us in an unenviable position. While it will not be an easy decision to join the US against a neighbour, deteriorating relations between Pakistan and Afghanistan as well as poor economic conditions could function as a catalyst in the decision-making process.  Keeping in view our previous experience of supporting the US in the War on Terror, the leadership would however, need to consider the long-term impact of such a decision on Pakistan.

The author is a retired Air Marshal of the PAF who served as Pakistan’s Air Advisor at New Delhi from 2002-2006, presently working as Advisor to CAS on CASS Affairs and Director of Emerging Technologies at the Centre for Aerospace & Security Studies (CASS), Islamabad, Pakistan. This article was first published in The Nation. He can be reached at: advtocas@casstt.com