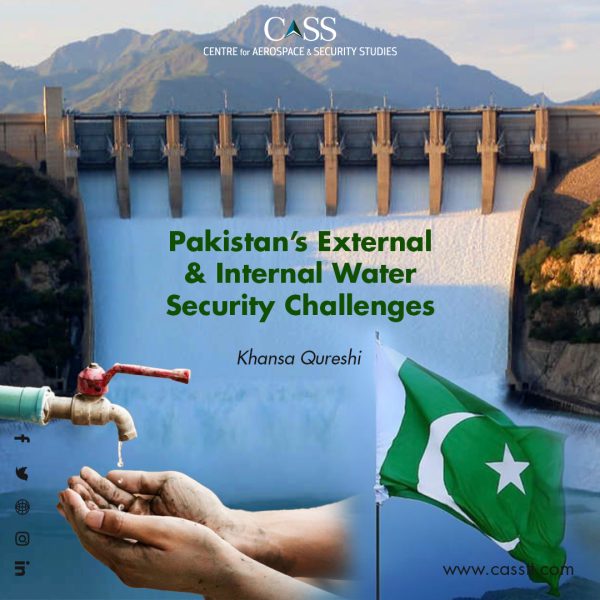 Pakistan, which was once a water-abundant country, is now facing unprecedented water scarcity mainly due to poor water management practices, population growth, rapid urbanisation, and industrialisation, amongst others. Currently, the country is one of the most water-scarce countries in the world. From 5200 cubic meters (m³) per capita in 1947, water availability has reduced to only 1000-1038 m³ per capita, declining at a rate of 400%.

The recently launched US Action Plan on Global Water Security also reveals that water stress in South and Central Asian regions remains high to extremely high. The report reiterates that Pakistan – along with Afghanistan and Central Asian states – will be the most stressed in the world by 2040.

While there are a number of issues pertaining to usage, administration, and management leading to water shortages, research shows that climate change is also one of the contributing factors behind depleting water resources.  It can cause variations in the crucial monsoon system that brings critical rains in the summer, and rapid melting of glaciers that feed rivers and cause further uncertainty about availability of water in the country. Meanwhile, the unpredictable nature of rains can worsen floods and drought. Apart from these issues, the country’s internal and external transboundary water disputes are further adding to the uncertainty of water availability.

The transboundary water dispute between India and Pakistan continues to brew as the former has threatened to divert water that flows from India’s upstream barrages. Recently, Pakistan highlighted its reservations about various Indian hydropower projects, particularly the Pakal Dul Hydro Electric Project during the 118th Meeting of the Pakistan-India Permanent Indus Commission (PIC). Previously too, Pakistan has been expressing its concerns to the World Bank about India’s hydropower projects on Jhelum and Chenab Rivers, violating the Indus Waters Treaty (IWT). Projects like Baglihar, Kishanganga, and Ratle Dams are likely to have disastrous hydrological, environmental, and irrigation impacts for Pakistan. However, despite repeated concerns, India remains adamant that these projects do not violate the IWT.

Indian’s non-reconciliatory approach is extremely disastrous for Pakistan’s water needs as well as for its economy. If India continues with its policy of constructing such projects, it will definitely lead to a cut in water flows to Pakistan. Meanwhile, if India decides to cut Pakistan’s waters, as has been advocated by the current BJP leadership, it can trigger serious conflict between the two.

On Pakistan’s western border too, a plausible threat of transboundary water dispute is emerging with Afghanistan. Pakistan is concerned about 13 dams planned on Kabul River, especially the Shahtoot Dam. Kabul River, after entering Pakistan, caters to the needs of millions of Pakistanis. Given that Afghanistan itself is a water-scarce nation with climate change worsening, if Pakistan’s water flows are squeezed, it can also incite tensions between the two countries which are already facing rifts over a number of issues related to terrorism, and border fencing.

Pakistan faces water distribution issues domestically as well. The two biggest provinces Punjab and Sindh are at loggerheads for decades over this issue, with Balochistan also registering its grievances against Sindh. The 1991 Water Apportionment Accord meant to facilitate water sharing from the Indus River Basin remains unable to resolve differences between the provinces. Downstream provinces have been fighting over water extraction for dams and irrigation purposes by upstream provinces and have levelled allegations of water theft. This interprovincial divide and resentment over water distribution particularly and other resource distribution issues, in general, will only be compounded given the rising level of water scarcity and increase in variability in water availability due to above-mentioned issues.

So, while politics hijacks water policymaking processes, the only immediately executable solution is to adopt measures that can be helpful in stalling the devastating effects of any inadvertent situation. For this purpose, Pakistan needs to improve water management practices at the local and individual level. The public must be incentivised to minimise water wastage as the booming population continues to squander fresh, underground water for chores at household levels. To this end, water meters can be installed at household levels to monitor water consumption.

The country utilises only two-thirds of available water, while the rest is lost. Its water storage capacity is in doldrums as it can store only up to 10% of water from its river flows as compared to the world’s average of 40%. Water storage, both overground and underground, should also be a top priority of the state as it will be the most sought-after asset in water scare periods. Moreover, efficient usage of water for agricultural practices must be given due consideration. While Punjab and Khyber Pakhtunkhwa have passed Acts that seek to conserve and allocate water resources to ensure their proper usage as well as establish a licensing regime for landowners to extract underground water, it must be ensured that these legislations are implemented properly. In fact, such policies should be implemented across the entire country. To conclude, water security requires serious attention as receding water levels can threaten the very survival of the country.

Khansa Qureshi is a researcher at the Centre for Aerospace & Security Studies (CASS), Islamabad, Pakistan. She can be reached at cass.thinkers@gmail.com