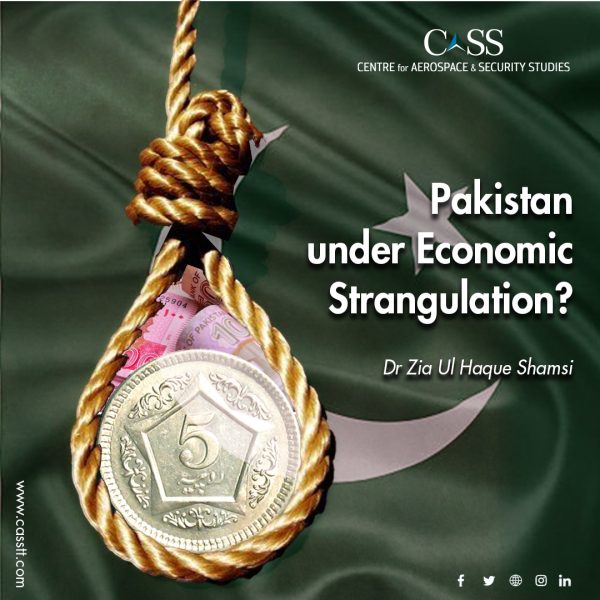 In my previous article, essentiality of political stability for economic security was discussed in detail. However, in this article, significance of economic security as an element of human security that is extremely important for the national security of any sovereign state, will be emphasised.

Beginning with the International Monetary Fund (IMF), Pakistan has been a member since 1950. Pakistan has been a beneficiary on 22 occasions in little over 70 years of its existence. Pakistan needed IMF lending primarily due to its heavy dependence on an import-led economy. Unfortunately, Pakistan is still under an IMF programme to ward off its rising Current Account Deficit (CAD). IMF team leader Nathan Porter, who negotiated the recent deal with Pakistan, summed up the economic state of the country. He said that, ‘Pakistan is at a challenging economic juncture. A difficult external environment combined with procyclical domestic policies fuelled domestic demand to unsustainable levels.’ Porter categorically stated that, ‘The resultant economic overheating led to large fiscal and external deficits in FY22, contributed to rising inflation, and eroded reserve buffers.’ Porter’s assertions clearly reflect that Pakistan has no way out but stay with IMF, which continues to squeeze the country to ensure the safe recovery of its lending. It is widely perceived by the people of Pakistan that IMF has been ruthless with the country in its conditions for the release of agreed upon funds that are desperately needed to stop the freefall of the currency in little over 100 days.

On another front, Paris-based Financial Action Task Force (FATF) had placed Pakistan on the grey list in June 2018 for ‘failing to check money laundering, leading to terror financing.’ FATF had given Pakistan a roadmap and a specific plan of ‘must do list’ that was to be completed by October 2019. Pakistan made sincere efforts to accomplish the task and undertook certain legislation as well punitive actions against the defaulters. However, FATF kept shifting the goalpost and was perceived to be acting on the direction of certain stakeholders which perhaps wanted to keep Pakistan under pressure. India was actively lobbying against Pakistan all along and ensured that the country remained in the grey list, rather at times it even tried to push Pakistan into the black list during the periods of assessments. It was not until the June 2022 Plenary, that Pakistan was able to satisfy the FATF of its mandatory compliance and now only an on-site verification stands in between Pakistan’s possible removal from the grey list.

Another important organisation that twists Pakistan’s arm is the European Union (EU) for its Generalised Scheme of Preferences Plus (GSP +).  The EU ‘gives developing countries a special incentive to pursue sustainable development and good governance.’ There are a total of 27 international conventions, mainly on Human Rights and Labour Rights that an eligible has to comply with. Unfortunately, most of the developing countries do not meet the European standards on the stated fronts, and Pakistan is no exception. EU does use GSP + facility as an arm twisting tool against Pakistan when it comes to legislation regarding minorities rights or the blasphemy laws.

The World Trade Organization (WTO) is another global organisation that developing nations look at with suspicion. However, WTO is the only global international organisation dealing with the rules of trade between nations. It is a rules-based organisation and its main agreements include the General Agreement on Tariffs and Trade (GATT), General Agreement on Trade in Services (GATS) and Trade Related Intellectual Property Rights (TRIPs). The goal for which WTO was established remains ‘to help producers of goods and services, exporters, and importers conduct their business.’ More often developing nations cry foul because ‘Free Trade benefits developed countries more than developing countries.’

The brief account of certain International Organisations that were created with a ‘noble’ cause of lifting developing nations have actually become economic coercion tools at the hands of the stronger economies. The imposition of economic sanctions by the relatively stronger nations on the pretext of Human Rights, Women Rights, Child Labour, Rights for the Minorities, Money Laundering, Terror Financing, etc., has become a routine, thereby increasing the dependence of the developing countries on IFIs for bailout packages. Pakistan has suffered immensely on account of each of the above and many more.

The solution lies in self-reliance and an all-inclusive export-led growth to reduce over dependence on imports that lead to CAD. It may sound simplistic, but it is certainly doable due to enormous potential that Pakistan enjoys in terms of climatology, topography, natural resources, and human resources. If the last 25 years have not been that productive, it does not mean that the next 25 should also be the same.

Dr Zia Ul Haque Shamsi is the author of ‘Nuclear Deterrence and Conflict Management between India and Pakistan’ and ‘South Asia Needs Hybrid Peace.’ He is presently working as Director (Peace and Conflict Studies) at the Centre for Aerospace & Security Studies (CASS), Islamabad, Pakistan. The article was first published in Daily Times. He can be contacted at: cass.thinkers@gmail.com