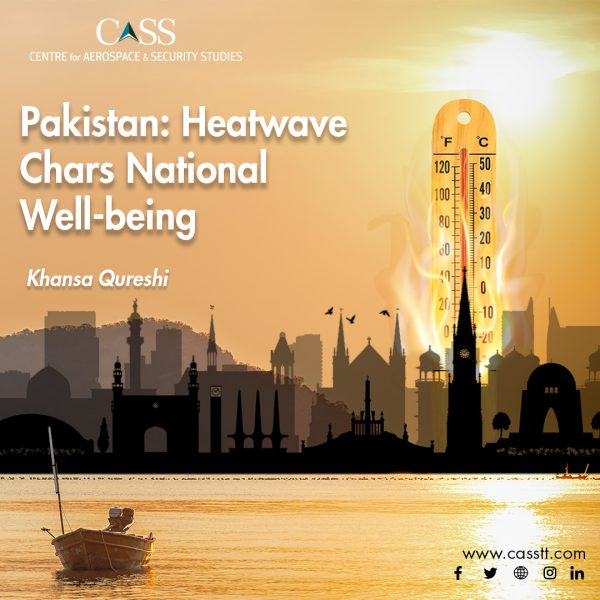 A brutal heat wave with record high temperatures scorched cities across Pakistan from March till June this year. Sindh’s Nawabshah city recorded 2022’s hottest ever temperature with mercury soaring to 51oC. While hot temperatures are common for the month of May in Pakistan, the persistently long heat in as early as March marked a turn of events from the past. Studies have mainly attributed this to be a result of climate change. As far as the consequences are concerned, the abrupt transition from winter to summer heralding a spring-less year has many negative impacts. So far, temperatures challenging human survivability have claimed 65 lives, but actual numbers are expected to be higher. Meanwhile, extreme temperatures also prove distressful for a country’s economic well-being as explained below.

Due to the current heatwave, agriculture is one of the most affected sectors in Pakistan. Following an unusually drier month of March, drought-like conditions, unavailability of water and other factors led to a decline in agricultural productivity. Resultantly, Pakistan faces a 2.5% decrease in crucial wheat crops. This loss is set to impose an extra USD 4 billion financial strain on the state. Due to the Russia-Ukraine war, the international wheat market is already constrained, driving global food inflation to record levels. In India also, the areas worst hit by this heatwave have lost up to 50% of their wheat yields adding to global fears of wheat shortages. This, while on the one hand, is going to stretch already thin foreign exchange reserves in Pakistan, can also prove to be a harbinger of food insecurity in the country.

Production of the country’s prized fruit ‘mango’ also saw a whopping 60% decline due to the extreme temperatures. The lesser yields induced by heat waves directly hit the income of farmers. Meanwhile, the deformity and smaller size of the fruit caused by the hot environment and lack of water led to a drop in quality exports for this year. It is predicted that Pakistan’s projected temperature is set to remain higher than the global average, resultantly decreasing agricultural productivity by 8-10% by 2040, particularly targeting wheat and rice crops. Therefore, future of the agricultural sector in Pakistan – beset with other irregularities as well – is not promising unless some radical measures are taken to minimise the impacts of extreme weather on the sector responsible for feeding millions in the country.

Another persistent bleak reality – also laid bare by the heatwave – is Pakistan’s inefficient energy infrastructure. The sector has been painfully underprepared to cope with the energy demand. Millions were left to face the sweltering heat without means to run fans or air conditioners. Even the 8% households that do enjoy the luxury of air conditioning cannot run them due to insufficient electricity supply.

As the increase in electricity demand during the extreme temperatures burdens the national grid, this scenario, with electricity supply mechanism already riddled with crises, frequently leads to power blackouts for many hours. This – while troubling for households – is a recipe of disaster for the smooth functioning of industries. Pakistan’s textile industry which accounts for 60% of the country’s exports is direly hit by the power crisis. Stakeholders fear a staggering 20% decline in exports in this season, further adding troubles for the current account deficit.

The impact of heat waves on peoples’ health can also be devastating. In Pakistan, the public is ill-equipped to deal with such extreme weather events. Having most of their work in outdoor settings, particularly in agriculture and construction sectors which are two of the most important sectors, farmers and labourers spend long hours out in the open, unprotected from scorching direct sun. The prolonged exposures to hot temperatures prompts immediate medical conditions like heatstroke and dehydration and worsens chronic illnesses such as cardiovascular, diabetic or respiratory issues. In 2015’s heatwave in Karachi, around 1200 people lost their lives, with majority of victims from poor economic backgrounds depending on daily labour.

The heatwaves have also had severe impact on glaciers in the north. The melting glaciers are causing floods as well as loss of infrastructure. In one such event during this year’s heatwave, the Glacial Lake Outburst Floods (GLOFs) from the melting Shisper glacier destroyed a bridge on Karakoram Highway in Gilgit-Baltistan. The flashfloods caused by GLOF stranded locals and tourists, destroyed two power plants, homes and other properties worth of millions of rupees in a matter of hours in the area.

As far as national preparedness is concerned, extreme weather events bring about a double dilemma for states – whether to bear the cost of the losses caused by such events or to prepare in advance for them? This atonement vs. adaptability question is even tougher for nations like Pakistan with bare minimum resources at their disposal. Given that heat waves are predicted to increase in countries like Pakistan, social development and economic well-being will remain hostage to climate emergencies unless global collective action is not taken.

Khansa Qureshi is a researcher at the Centre for Aerospace & Security Studies (CASS), Islamabad, Pakistan. She can be reached at cass.thinkers@gmail.com