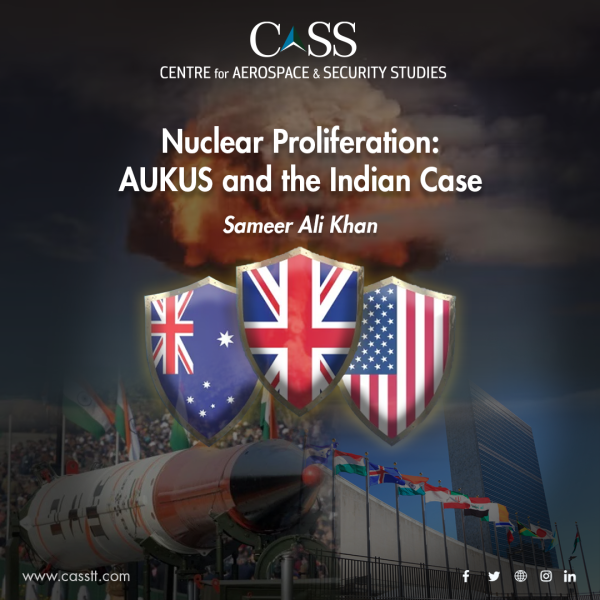 Just before the RevCon, Australia, United Kingdom (UK) and the United States (US) published a working paper on ‘Cooperation under the AUKUS partnership.’ The trilateral partnership between Australia, UK, and US (AUKUS) is geared towards providing Australia with a conventionally armed and nuclear-powered submarine (SSN) capability in their shared quest for countering Chinese military influence in the region. The working paper is aimed at pre-empting anticipated criticism of the AUKUS arrangement. It highlights how the concerned parties seek to operationalise the arrangement in concert with the International Atomic Energy Agency (IAEA) to ensure implementation. It clarifies that Australia could not further any military nuclear programme by virtue of its obligations under the NPT and South Pacific Nuclear-Weapon Free Zone (NWFZ); IAEA safeguards; Australian commitment to not pursue enrichment; reprocessing and fuel fabrication capabilities (all necessary for pursuing a military nuclear capability); and various measures to enhance proliferation resistance; and hence, the need for AUKUS.

Notwithstanding these explanations, China was scathing in its criticism of the deal in its statement delivered at the conference on 2nd August. It maintained that ‘nuclear-powered submarine cooperation’ presents serious proliferation risks and undermines the objective and purpose of the NPT. It called upon the international community to ‘reject double standards in the area of non-proliferation.’ China also highlighted lack of progress on disarmament, delays in bringing back the Iran nuclear deal (JCPOA) on track, denuclearisation of the Korean Peninsula, and lack of progress on NWFZs etc.

Despite being a recognised Nuclear Weapon State (NWS) itself, China echoed all the concerns of Non-Nuclear Weapon States (NNWSs). Chinese call for rejecting ‘double standards in the area of non-proliferation’ is most relatable to South Asia where two NWSs outside the NPT (India and Pakistan) are meted different treatment. Even if one ignores India’s access to civil nuclear cooperation at the cost of non-proliferation, another pertinent and more relevant example would be its leasing of Russian SSNs. In fact, while the proliferation risks posed by AUKUS are being discussed at the NPT RevCon, it is important to also look at similar cooperation between NPT member and non-member states.

India has leased Russian SSNs twice in the past, first from 1987-91 and then from 2012-2021. The two sides signed an agreement for supply of a third SSN in 2019 which is expected to be delivered by 2025. There are both similarities and stark contrasts between the Indo-Russian arrangement and AUKUS. The recipients (India and Australia) in both cases are technically NNWSs under the NPT definitions. However, there remain glaring differences between the seemingly similar statuses. Even when India entered the first of its kind agreement with the former Soviet Union in 1987, it had already conducted a nuclear weapon test in 1974. Furthermore, unlike Australia, it had complete mastery over the nuclear fuel cycle and possessed enrichment capability, reprocessing and fuel fabrication facilities outside the IAEA safeguards. Through the working paper, we know that Australia would not be able to divert the Highly Enriched Uranium (HEU) and that even if it did, it does not possess – and will not develop – the requisite fuel cycle to support any military programme. Such a pursuit would also be checked by Australian membership of the NPT, it being a member of a NWFZ and implementation of comprehensive IAEA safeguards.

All these aspects are missing in the Indian case, and will continue so, as it receives a third SSN by 2025. New Delhi’s cooperation with a recognised NWS (earlier Soviet Union and now Russia) over sensitive nuclear propulsion technology has remained secretive and will remain so unless greater transparency is demanded by the non-proliferation regime. It is, therefore, no surprise that its nuclear capable ballistic missile submarine (SSBN) programme greatly benefited from such cooperation.

The experience gained from operating the Russian SSN and cooperation from its state apparatus played a role in advancing India’s own nuclear propulsion pursuits. Today, India has three SSBNs and is in the process of constructing more. External cooperation from a NWS contributed to advancing the Indian nuclear triad – otherwise considered a violation of the NPT.

The impact of such cooperation on strategic stability in a dyadic nuclear relationship (India-Pakistan) is complex at best. However, availability of assured second-strike capability with one of the two involved states is considered destabilising. Notwithstanding Indian nuclear cooperation’s implications for regional strategic stability, there are no ‘visible’ safeguards to address proliferation risks. In this domain, India has even used civil cooperation to advance its military capability. This creates a dangerous precedent that other states may seek to follow to the detriment of non-proliferation objectives.

With AUKUS, there are now two models for states to follow. A NNWS under the NPT (like Australia) will have to conform to the highest non-proliferation standards, whereas in case of a NWS outside the NPT (like India), details can be shrouded in secrecy. What remains to be seen is whether states like Israel and Pakistan (having the same legal status as India) or North Korea will choose to follow the Indian or the AUKUS model – if and when they decide to move in this direction.

Sameer Ali Khan is a Senior Researcher at the Centre for Aerospace & Security Studies (CASS), Islamabad, Pakistan. He can be reached at cass.thinkers@gmail.com