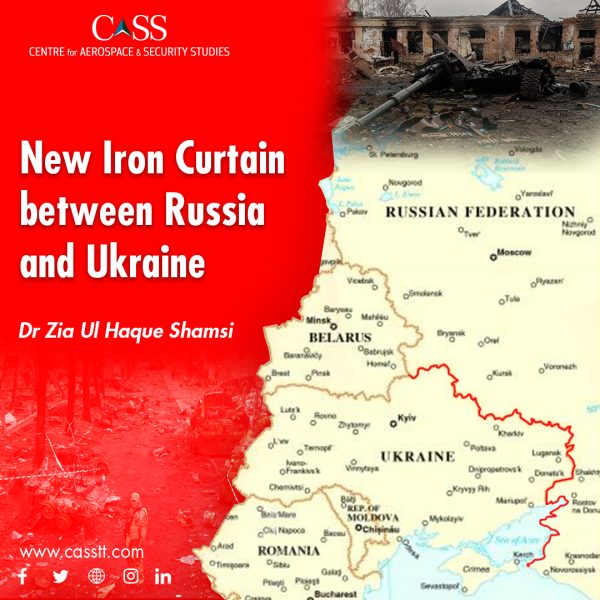 The title is inspired by the phrase coined by Russian Foreign Minister Sergey Lavrov and quoted by Ambassador Riaz Khokhar at a seminar on the Ukraine war organised by the Centre for Aerospace & Security Studies (CASS) on July 6, 2022.

The war in Europe between Russia and Ukraine has entered its fifth month since a full-scale offensive was launched by Russian land forces on February 24, 2022. Like so many wars, which begin as a result of miscalculation, or the exuberance of leadership without due consideration, this war is no different. Neither in its nature nor its character. It is intense, destructive, and without a visible end.

Without going into the background of the Russia-Ukraine war, because a lot has already been written on the subject since its beginning, this article is aimed at suggesting a way forward to initiate processes that may increase the probabilities of its logical culmination.

At the outset, Russia must announce a ceasefire on all fronts to reduce further destruction and loss of lives on both sides, particularly Ukrainians. Concurrently, NATO must stop its military consignments to Ukraine that is fuelling the fire in this unnecessary war. In fact, most wars are unnecessary, but this one was absolutely unwarranted.

The world has, at large, still not recovered from the ramifications of the COVID-19 pandemic, and most developing countries are still grappling with supply chain disruptions with regard to energy and food consignments. At this stage, two of the world’s largest energy and food suppliers, Russia and Ukraine, are engaged in a devastating war which has, in fact, adversely impacted all the energy and food importing states. Not only have the prices of energy and food commodities skyrocketed, but availability is also getting questionable for cash-starved countries. Sri Lanka is just one such state, whereas Pakistan is also not far from hitting that road.

At the recent CASS seminar, Ambassador Riaz Khokhar raised a very pertinent question of whether Russia would ever vacate the captured areas in the Donbas and Luhansk regions since they are inhabited by ethnic Russians. It is in this context that an “iron curtain” may return to Europe between Russia and Ukraine.

However, this author is of the view that the Cold War’s iron curtain ensured that the two superpowers did not fight directly with each other, primarily due to the establishment of Mutually Assured Destruction (MAD). Whereas, the “new iron curtain,” if it gets drawn in the eastern half of the vast territory of Ukraine, may not be able to guarantee any war between Russia and NATO in the future. Therefore, US-led NATO must assure Russia that Ukraine would not be made part of NATO under any circumstances, even if Ukraine becomes a part of the European Union, as suggested by Ambassador Khokhar, and gets a Marshall Plan for its reconstruction.

For the same purpose, it is incumbent upon US-led NATO to withdraw all its defensive but highly sophisticated weapon systems provided to Ukraine to defend itself against the Russian offensive.

On part of Russia, Putin must remain cautious of mission creep and must not violate Chinese sage Sun Tzu’s landmark dictum that protracted wars are counterproductive for the offensive elements. Russia may have achieved its politico-military objectives partially and may be willing to continue its war for another two months to slice as much Ukrainian territory as possible. However, it would soon realise that going into the Ukrainian heartland beyond the areas inhabited by ethnic Russians would become improbable to hold without serious repercussions. Putin must not ignore deep socio-cultural and family ties with the Ukrainians, and therefore, must bring this war to an end as soon as its security parameters are achieved.

Wars do not resolve disputes permanently but rather sow the seeds for the next war. Recounting Sun Tzu’s precepts that a stronger power must aim to win the war without fighting, or at best win the war in the minimum possible time, protracted wars would always favour the defender because it would find many sympathisers and supporters to defend its territory. Moreover, the people would soon get alienated from offensive forces and take up arms to engage the enemy alongside their regular forces, which could be extremely harmful to the occupying forces.

Dr Zia Ul Haque Shamsi is the author of ‘Nuclear Deterrence and Conflict Management Between India and Pakistan’ and ‘South Asia Needs Hybrid Peace.’ He is presently working as Director (Peace and Conflict Studies) at the Centre for Aerospace & Security Studies (CASS), Islamabad, Pakistan. The article was first published in Daily Times. He can be reached at cass.thinkers@gmail.com

According to a study, the average human being spends around 90,000 hours of life at work. Hence, it is important to understand how the work
178 views