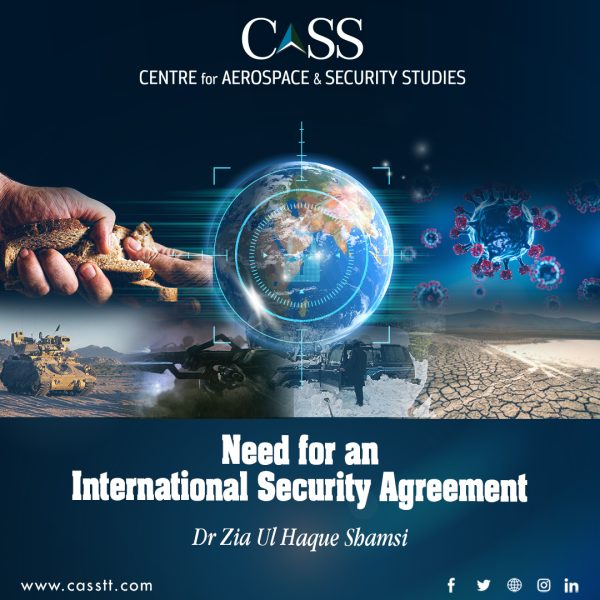 The theory of classical realism insists on the significance of power and security for the state in the prevalent international system. However, its precepts have made the developed states very selfish and cruel. The relatively stronger states have disregarded the basic needs of the smaller states and in the garb of their security, have ruined the weaker states through both kinetic and non-kinetic means. This has made the world highly vulnerable to wars and conflicts, and the 21st Century has already seen several wars between Unequal Military Powers (UMPs). The Afghan War-II, Iraq War-II, Libyan War, Yemen War, Syrian Conflict, and the ongoing Russia-Ukraine War, to name a few.

However, this article is not intended to repeat the consequences of these wars, but to highlight the need for an International Security Agreement (ISA) due to the frequency of such wars and conflict, because the world is faced with far more serious challenges than wars between UMPs.

The threat of the Pandemic is not yet over, and COVID-19 keeps on resurfacing in different variants and at different places. The latest being in China, the birthplace of the virus, more than 13,000 new cases were reported on 8 January 2023, alone. The Guardian report of January 9 suggests that ‘Almost 90% of people in China’s third most populous province (Henan) have now been infected with COVID-19.’Perhaps, China can still afford the consequences of the Pandemic, but the developing nations cannot, because shutting down manufacturing hubs led to acute shortages of consumer goods across the globe.

Another challenge that is affecting nearly all nations is Climate Change. Heating the planet due to the burning of fossil fuels, mainly due to developed nations, is hurting developing countries, and 2022 was one of the hottest years for the same reason. The global temperature has risen by a little over 1oCelsius since the beginning of the Twentieth Century. Likewise, the sea level is rising at an alarming rate with shrinking glaciers.

Food security is another aspect that is haunting the developing nations due to frequent droughts, extraordinary rains in some places causing flash floods, lack of water for agricultural activities, and acute shortage of essential food items due to the ongoing Russia-Ukraine War, particularly in Africa and South Asia. This phenomenon gets further complicated by rising inflation and an impending global recession.

Once again, developed states may still be able to sail through these challenging times while simultaneously supporting wars between UMPs, without realising their impact and long-term consequences on the existential threats faced by some developing nations. Perhaps, at that stage, affected people would have no option but to leave their ancestral places and move to developed states as economic refugees. Now, these developed states would either shut their borders or put them in camps to live miserable life.

Therefore, global stakeholders must realise the gravity of the situation now, and craft an ISA, which may lead to a moratorium on wars and conflicts between UMPs. I am not suggesting any kind of world government, but a break from unnecessary wars that only benefit the developed nations and ruin the developing states. Perhaps, a fifty-year break and an ISA between global stakeholders with guarantees by International Organisations for strict compliance may then give us all time and resources to fight the real issues like Climate Change, Pandemic, recession, and other evolving threats including cyber warfare, terrorism, and extremism due to the rise of Non-State Actors (NSAs), and the rise of far-right sentiments in some European countries, and India.

I am cognizant of the fact that the world is not an ideal place to live in, particularly for the people of developing countries, and the realists might simply declare the proposal as unrealistic and not doable, but that must not discourage academics from writing, speaking, and proposing peace plans at this difficult time. In the same context, let me quote, Cold War’s Soviet Foreign Minister Andre Gromyko, ‘Ten years of talk is better than one day of the war.’ Unfortunately, the present-day leaders, particularly in the developed West seem spring-loaded to war positions and do not avail of all avenues of peace before initiating kinetic actions against a relatively weaker opponent. I am of the view that all wars between UMPs were avoidable, including the ongoing Russia-Ukraine War.

Dr Zia Ul Haque Shamsi is the author of ‘Nuclear Deterrence and Conflict Management Between India and Pakistan’ and ‘South Asia Needs Hybrid Peace.’ He is presently working as Director (Peace and Conflict Studies) at the Centre for Aerospace & Security Studies (CASS), Islamabad, Pakistan. The article was first published in Daily Times. He can be contacted at: dir.pcs@casstt.com.