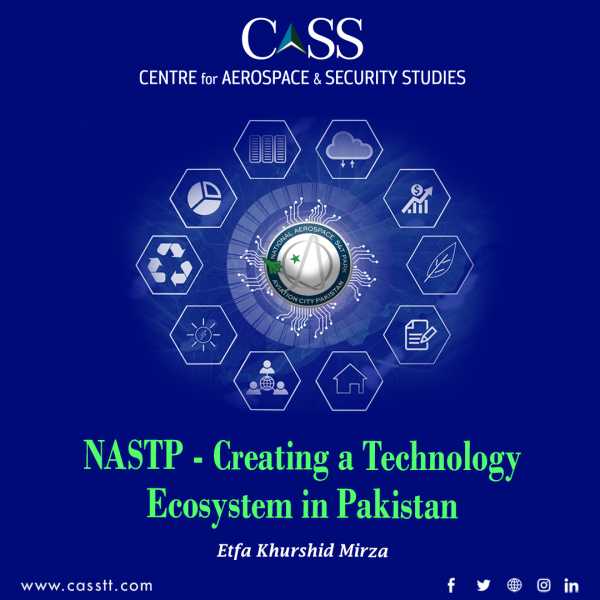 The conclusion of IDEAS 2022, the 11th international defence exhibition in Karachi was a huge triumph for Pakistan’s defence sector. The purpose of IDEAS is to bring together domestic and foreign producers and suppliers of goods and services in order to explore potential joint ventures, outsourcing, and collaborative opportunities for cooperation in the defence sector.

This year, the Pakistan Air Force (PAF) podium was special as it showcased the National Aerospace Science & Technology Park (NASTP), one of its ground-breaking initiatives that has recently been established. Pakistan, one of the less technologically developed nations, is making an effort to stand on its own feet by getting involved in the development of new technologies. NASTP is a pioneer organisation in Pakistan that is approved by the Government of Pakistan as ‘a project of strategic national importance’ led by the Pakistan Air Force in creating opportunities for joint work between industry, academia and the government, turning it into a technology ecosystem in the country.

A technology ecosystem is a network of business entities that are interdependent and interrelated with each other meant to sustainably promote innovation. Companies co-evolve their skills around new breakthroughs in business ecosystems. In an environment of cooperation and competition, they innovate, support new products, meet the industry’s demands and develop new technologies. NASTP is all about that.

The inauguration of NASTP was officially announced by the Chief of the Air Staff, Air Chief Marshal Zaheer Ahmad Babar Sidhu, during the international conference ‘Global Strategic Threat & Response 2022’, organised by the Centre for Aerospace & Security Studies. In his remarks, he stressed how the creation of NASTP would assist in bridging the gap between government, industry, and academia. It is undoubtedly a revolutionary endeavour by the country’s Air Force that is Second to None, given its increasing focus on cutting-edge technologies such as Artificial Intelligence, cyber, information technology etc.

Air Commodore Liaquat Ullah Iqbal, Chief Executive Officer and Director of NASTP, gave a detailed overview of NASTP to the audience during the session on ‘Aerospace Security: Determinants and Future Prospects.’ He contended that the aerospace sector had the ability to positively affect the nation’s economic potential and may catalyse the most crucial sector of society, i.e., academia, intellectuals, and think tanks. With design, R&D, and innovation centres, NASTP was founded with the goal of becoming an important global aerospace cluster. The plan would be executed in four levels. In the first, the main aerospace cluster at Kamra would be established, then techno-parks in different cities would be developed. One at Rawalpindi has been completed and would be formally inaugurated by the country’s leadership in March 2023. Similarly, techno-parks in other major cities would follow. The establishment of university techno-parks would take place in the third phase encompassing Air University campuses as well as a few other national universities. The establishment of software technology parks would be the last phase.

NASTP plans to develop its ecosystem through joint ventures, collaborations, and linkages in order to maximise value for the nation’s institutions, industries, and people. The main goal is public sector-led private sector growth to become the nation’s engine of growth for the aerospace, cyber, and IT industries. It would support start-ups and Small and Medium Enterprises (SMEs) through its techno-parks and build relationships to enhance the country’s private sector.

The goal of effective technology echo systems is to close the gap between customers, goods, technologies, and markets. To create, test, build, operationalise, and finally expand the product to foreign markets, the government, business, and academics must completely commit to the ecosystem. Since, such large enterprises demand ongoing effort, the route is not simple. Initiatives are often undertaken in developing countries, but they are unable to generate the anticipated results due to a lack of resources, motivation, and support. Most importantly, people do not have the cultural awareness to recognise the significance of such enterprises in economic development of the country. Fortunately, NASTP has the backing of the government as well as support of the PAF with clear recognition that such projects are directly linked to ensuring the national security of a country like Pakistan. The world has moved far ahead in technological development, therefore, in order to match this rapid pace, support from people, academia, think tanks and industry is a vital need of the hour for such initiatives.

Etfa Khurshid Mirza is a Research Assistant at the Centre for Aerospace & Security Studies (CASS), Islamabad, Pakistan. The article was first published in Pakistan Observer. She can be reached at cass.thinkers@casstt.com.