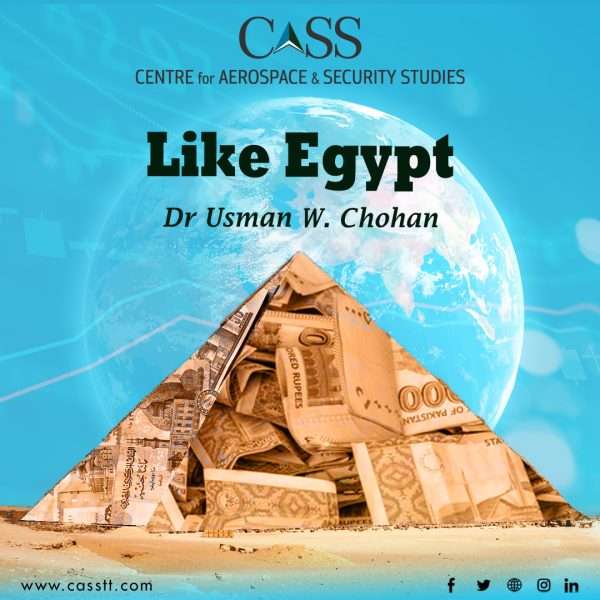 As we continue to observe the evolution of a distressing global economic situation, including its far-reaching effects within Pakistan, it is worth remarking upon other countries that are mired in similar circumstances to our own. In particular, the case study of Egypt stands out in terms of the economic hardships that it is confronting, and offers parallels worth studying as part of a common plight of disquiet in the post-pandemic era, which ultimately requires common solutions to an inherently global crisis.

Egypt’s commonalities with Pakistan are striking. It has a significant youth bulge, wide income disparities, a looming water crisis, food insecurity, spurious governance mechanisms, propensities for strongmen, loud-mouth preachers, a rudimentary industrial base, inefficient agriculture, tensions with neighbors, a large population, and both fiscal and current account deficits. With these constraints, Egypt faced economic turmoil in 2022 that was similar to ours, and caused by the same factors, including: the war in Ukraine, commodity shocks, supply chain constraints, widespread inflation, and domestic unrest. In the first three weeks after the Russo-Ukrainian war erupted, Egypt faced an outflow of more than $20 billion in investment, as investors withdrew from the frontier markets towards safe havens.

Like Pakistan, Egypt turned towards “friendly countries” first, and received $13 billion in deposits from the UAE, Qatar, and Saudi Arabia. It earned another $3.3 billion by selling off national assets to the UAE. Despite this, the country’s reserves have trickled to near zero, and with the passage of months, Egypt’s condition has significantly worsened, with the primary concern being (as with us) that of an acute shortage of dollars. $9 billion worth of goods are clogged at its ports. Inflation was as high as 19% in November 2022 (similar to Pakistan’s 24% that month). Consumers are feeling an incessant pinch and the domestic public has become restive, while businesses are closing shop and industries are shuttering their doors.

The government has responded with a mix of bold rhetoric and negotiations with the IMF. On the one hand, the Egyptian president Al-Sisi has made bold claims to force financial institutions to procure dollars, but has not provided sufficient details on any plans for the government to shore up its dwindling reserves. On the other hand, Egypt has turned to the IMF and has received the typical IMF stipulations in exchange for the typical IMF triflings.  It has sought $3 billion from the IMF in exchange for tough conditions that mirror those imposed on Pakistan, including the free float of its currency (the Egyptian pound) through a flexible exchange rate regime. Although it had long resisted such a move, the government is now letting the pound move about and, as a result, the currency has fallen to record lows. Whereas the rate was 15 pounds / dollar in early 2022, it is now at 26 pounds (nearly halving), and likely to fall further.

The government there used a similar tactic to ours of withholding LCs (letters of credit) for imported goods, in a bid to hold back currency reserves. However, such strong-arming has negative effects throughout the economy, including for the industrial, agricultural, and service sectors which require imports for their inputs. Like in Pakistan, a black market has emerged for dollars in Egypt, and the economy is operating between two different currency rates. Their central bank is attempting to hold on to reserves for as long as possible, but the global economic environment is making their job extremely difficult.

As such, one can draw considerable parallels between the Egyptian and Pakistani economies. A similar combination of structural and cyclical factors is putting both societies at risk , with the economic prospects remaining worrisome. Their similar demographic, governance, cultural, ecological, and economic profiles leaves both at the mercy of exogenous forces, which do not appear to abate in the near term. Both have undertaken similar ad-hoc responses, including a mix of rhetoric and reversion to IMF programs, while the central banks take emergency measures that exact significant tolls on commerce and living standards. The common denominator is the lack of US dollars, which is a currency neither state prints, but on which each depends.

There are several recommendations to be made after observing such a parallel. A multinational “coalition” over economic issues, comprising countries such as Pakistan and Egypt, must be formed to articulate a common condition in the post-pandemic economy. This coalition would include countries in similar distress (Ghana, Kenya, Bangladesh, Argentina, etc.), to (1) rout the business-as-usual loansharking of major economic institutions such as the IMF, (2) raise a common voice to articulate shared concerns, (3) engage in institutional-specific coordination (such as central banks), and (4) generate wider solidarity instead of each emerging market grappling with a global problem alone. In addition, publics should be made aware of the commonality of suffering in various countries, since political forces often engage in domestic sloganeering that makes publics lose sight of a much larger quandary.

The current crisis, whether in Pakistan or Egypt, is premised on exogenous disruptions preying upon endogenous vulnerabilities. Assuaging the public, bringing it on-board with decisions, and asking for their participation in a common national effort; these are the need of the hour in all such countries. As the condition of Egypt, or any number of such countries, demonstrates to us, we are not alone in such difficult times, but every such country struggling alone, despite strong similitude in predicaments, is much likelier to falter.

Dr. Usman W. Chohan is the Director for Economic Affairs and National Development at the Centre for Aerospace & Security Studies (CASS). He can be reached at dir.econ@casstt.com.