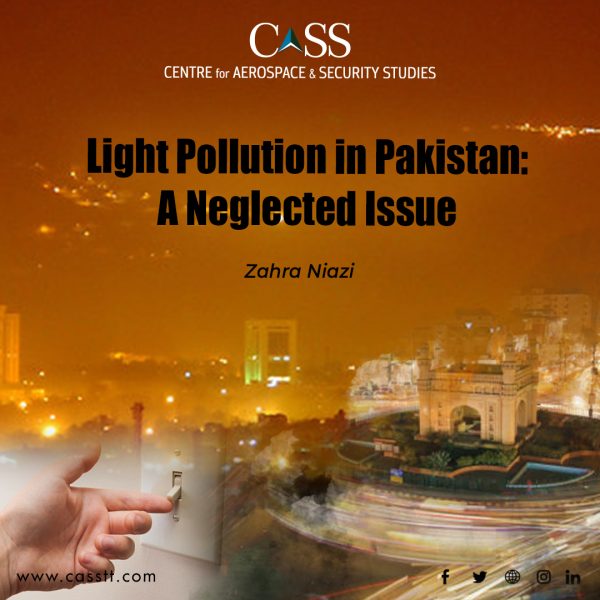 Light pollution, defined as the presence of unnecessary, excessive, and misdirected outdoor artificial illumination at night, is one of the major issues of our world today – albeit one that has not been challenged enough. The most recent World Atlas of Artificial Sky Brightness developed by a team of researchers in Germany illustrates the magnitude of the prevalence of light pollution, with the majority of North America, Europe, and Asia identified as light-polluted, notwithstanding the varying intensities of the pollution levels.

A deeper look at the Atlas reveals that South Asia is one of the most light-polluted regions. While this can primarily be attributed to the pollution levels in India and Bangladesh, the majority of Punjab and Sindh province and a significant proportion of Khyber Pakhtunkhwa in Pakistan are also identified as light-polluted, with the highest levels found in major urban areas such as Lahore, Rawalpindi, Islamabad, Hyderabad, Karachi, Quetta, Sukkur, Faisalabad, and Peshawar. A night drive around our cities would validate this further as one would find unnecessary and excessive lighting in various places, including buildings, streets, and playgrounds.

Light pollution per se constitutes energy waste but also pollutes the air and increases the carbon footprint. According to an estimate by the International Dark-Sky Association, about USD 3 billion per year worth of energy is lost to sky glow, and millions of tonnes of carbon is released into the atmosphere each year due to it. In the United States alone, unnecessary lighting releases 38 million tonnes of CO2 each year. Moreover, it contributes to air pollution by inhibiting the chemical reaction process that cleanses the air during the night. This chemical reaction process is dependent on nitrate radical destroyed by sunlight and can, therefore, occur during darkness. However, excessive illumination suppresses this nitrate radical.

For Pakistan – a country grappling with an energy and air pollution crisis and its associated economic repercussions – the necessity of addressing the challenge of light pollution cannot be overemphasised. In the energy sector, the shortfall of electricity has reached 6,997 megawatts, which has immense implications for the country’s struggling economy, given Pakistan’s excessive dependence on fuel imports to meet the domestic energy demand. Moreover, Pakistan ranks third out of 118 countries on the air quality index, the estimated economic cost of which amounts to USD 47.8 billion.

However, not all cities in the world rank poorly in terms of light pollution, and those in Europe who do not, are the ones Pakistan can learn lessons from to fix this problem. In the Berlin, the lights of 200 prominent buildings, landmarks, and monuments remain turned off at night. Likewise, in the city of Weimar, the duration of street lighting has been reduced by one hour every day, while in the city of Mainz, half of all the street lighting has been cut off. The city of Augsburg has followed suit by dimming street lights and switching off exterior lighting on historic buildings at night. It is also considering closing down some traffic lights. Additionally, German authorities have directed that displays and LEDs in shop windows, neon letters on facades, and digital outdoor advertising such as billboards should remain switched off between 10pm and 6am.

In September, the French authorities announced an ‘energy sobriety plan’ for its capital Paris to reduce the city’s energy consumption by 10 percent. According to the plan, ornamental lighting on several monuments and facades will remain switched off from 10pm onwards, and the Eiffel Tower would not be lit from 11:45pm. The authorities estimate that this would save USD 9.7 million. Additionally, several French communes started switching off their street lights at night during the COVID-19 lockdown, and many continue to do so even after restrictions were lifted.

In the Austrian capital Vienna, energy sobriety involves dimming street lights. The famous Christmas illumination in Vienna’s Ring has also been cancelled for this year. Moreover, in the Austrian cities of Wiener Neustadt and Linz, the lights on bridges and landmarks remain turned off from 11pm onwards, and Vienna is all set to follow this example. Several cities and towns in Austria and Italy have also turned off their night-time commercial signs. Spain has directed shops and institutions to turn off lights from 10pm onwards. These measures would remain in force till November 2023. Likewise, local authorities in several Bulgarian towns have ordered that street lights remain switched off at night.

Confronted with environment- and energy-related challenges that have important linkages with light pollution in one way or another, it is time that the state and local authorities in Pakistan draw lessons from the aforementioned examples, as these strategies are not only low-cost and impactful but also sustainable. While reducing lighting, specifically street lighting, may have some security risks, these can be avoided by implementing them more efficiently and strategically. For instance, in areas where artificial lighting is critical, motion sensors can be installed on lights, or low-watt and covered bulbs with light facing downwards can be used.

However, reducing light pollution is not just the task of state and local authorities. Excessive illumination in the porches, driveways, lawns, and roofs of our houses also needs to be minimised. This can be done by simply turning off unnecessary lights or removing decorative lights, using LED bulbs or covered bulbs, etc. These simple measures can go a long way toward addressing the negative fallout of light pollution in Pakistan.

Zahra Niazi is a Researcher at the Centre for Aerospace & Security Studies (CASS), Islamabad, Pakistan.