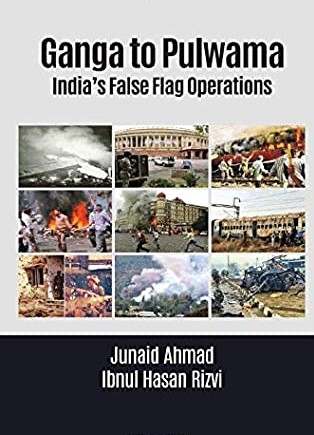 For years, India has worked to undermine Pakistan in many different ways on the world stage. It has been doing this by falsely accusing Pakistan of sponsoring terrorism in India while simultaneously conducting covert subversive activities inside Pakistan, besides spearheading disinformation campaigns through a network of sponsored NGOs and fake news organisations. Successive Indian governments have done so on a number of occasions since the inception of the two countries at times to appease the local populace to secure its nefarious political objectives. The attack on the Indian Central Police Reserve Force (CPRF) in Pulwama, where 40 soldiers died, was unsurprisingly blamed on Pakistan. It is the most recent example of the Indian fabricated campaign to malign Pakistan internationally.

Dr Junaid Ahmad and Ibnul Hasan Rizvi in their book ‘From Ganga to Pulwama: India’s False Flag Operations’, have highlighted eight major false flag operations carried out by India to malign Pakistan starting from the hijacking of the Indian Airlines Fokker 27 (named Ganga) in January 1971; Indian Parliament Attack in December 2001; Arson attack on a train at Godhra that led to the Gujrat carnage in 2002; the Samjhota Express Arson in February 2007; Mumbai Attacks in November 2008; Pathankot in January 2916; Uri Attack in September 2016; and Pulwama bomb blast in February 2019. While there were a large number of smaller similar false incidents, however, the book covers these major ones. Every incident has been discussed in detail in separate chapters, highlighting the regional scenario, the sequence of plan and execution and what was the motive behind staging these attacks. Another important point raised in the book is, that crises are created by India’s ruling parties to gain political mileage at the domestic and international level or to divert attention of its citizens from an outstanding issue faced by the government. In case of Pulwama, the Indian national electorate was programmed to demand retribution.

The authors identify that in each attack, its Indian planners were very careful that no upper casts Hindus, VIPs, or journalists, both local and foreign, were hurt. The victims were always from the weaker segment of society so that there was not much hue and cry about the victims and there was no risk of an in-depth inquiry to uncover the truth about the real culprits and actual objectives of the attacks. The authors explain how the bloodthirsty Indian media, within minutes of such attack, begins its vicious campaign against Pakistan to rile up the sentiments of the audience. All the attackers were either killed on the spot or sentenced to death through a hasty trial in Indian courts. Another important claim made in the book is India’s support to the terrorist organisations operating within Pakistan. There is a strong perception that there exists a nexus between Pashtun Tahafuz Movement (PTM), India’s Research and Analysis Wing (RAW) and Afghanistan’s intelligence agency, National Directorate of Security (NDS). Similarly, there are indications that there also exists operational and financial connection between RAW and the Balochistan Liberation Army (BLA), and Baloch Raaji Sangar (BRAS), etc.

While discussing every attack/operation, the authors have cited unbiased and renowned writers, both Indian and otherwise, to conclude that fingers distinctly point towards the involvement of the Indian establishment in these attacks. For instance, in chapter two, titled ‘Hijacking of Ganga’, the authors quote Anil Maheshwari’s (Principal Correspondent of the Hindustan Times, who covered Kashmir extensively) book titled ‘Crescent over Kashmir: The Politics of Mullaism’ chapter ‘Islamabadisation’ in which he writes, ‘In fact, an Indian news agency, UNI, had flashed the story of the involvement of an Indian agent in the hijacking on the very day it occurred’ (p. 33). Moreover, the book in the last chapter highlights India’s centuries old doctrine of, ‘never attempt to win by force what can be won by deception.’

Towards the end of the book, after discussing each false flag operation conducted by India to tarnish Pakistan’s image globally and portray it as a miscreant that is destabilising the region, the chapter titled, ‘India’s Support for MQM, BLA, BRA, PTM, etc.’ highlights the role of Indian intelligence agencies in exploiting Pakistan’s internal fault lines to destabilise her. The authors are of the view that India has been so highly successful in the implementation of its deception doctrine that it has even been able to trick established democracies like the United States and United Kingdom.

The book states that no Pakistani government has been successful in countering the effects of these false flag operations. Since Pulwama has served as an eye opener, some key steps that government of Pakistan can take, in future, are enlisted in the book. These include:

I would certainly recommend this book to students and scholars of International Relations to work on countering the narrative that India has been building through her false flag operations to malign Pakistan and force their assertion that the latter is a terrorist state. This book can also be a good read for strategists and policymakers to understand the patterns of these false flag operations and in future counter them to unveil India’s true face.

According to a study, the average human being spends around 90,000 hours of life at work. Hence, it is important to understand how the work
174 views