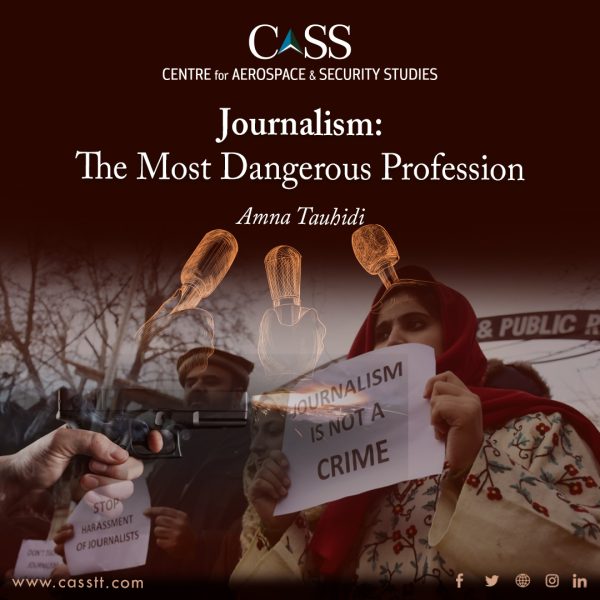 Independent media and journalism play a crucial role in the establishment of democratic and participatory societies by ensuring transparency and accountability of those in power.  According to Masudul Biswas, media plays a key role in guaranteeing meaningful political participation by monitoring the activities of public administrators and other institutions that affect public life. This active monitoring by media personnel helps to combat corrupt practices in society, keeps in check the misuse of power, identifies loopholes in the system, and most importantly, helps prevent abuse of human rights by governments. However, while performing their duty, journalists themselves become vulnerable to human rights abuses, including torture and harassment, along with facing life-threatening risks. The United Nations (UN) Secretary-General António Guterres has also highlighted that journalists and media persons face ‘politicization of their work’ and attempt to curb their freedom have been growing.

The UN regards journalism as one of the most dangerous professions in the world. According to the United Nations Educational, Scientific and Cultural Organization (UNESCO) database, from 2016 to 2021, 455 journalists have been killed while performing their duties. The Global Conference for Media Freedom: Threats Against Journalists, 2020 found that reporters and bloggers investigating issues of corruption, terrorism, gender violence, and misuse of public funds were more vulnerable to life threats. According to OHCHR findings, there has been a sharp increase in attacks on journalists threatening their physical safety and freedom of expression. Some other challenges faced by the journalist community include fraudulent cases, allegations of treason, detention, heavy fines, digital and sexual harassment, denying access to primary information, denying the right to defend the allegations against them, etc.

A few possible reasons for the decline of media freedom include pressure tactics from the powerful/political elite, regulatory and financial controls, online harassment, bullying, legal restrictions, targeted electronic surveillance to intimidate and silence investigative journalism, state-sponsored property changes, ownership of private TV channels by the political elite,  reporting/detaining honest journalists, public denunciation of honest journalists, proactive support to state-owned media enterprises by offering them incentives and preferential treatment in terms of regulation, finances and access to information. These factors are used against media to force them to tailor their work to serve the interest of a few – the people in power.

Today, journalism and media overall are witnessing a period of crisis and turmoil at the global level.  States are exploiting their political power to crack down on journalists and silence dissenting voices. Russia has silenced many of its local and international journalists reporting objectively on the Russia-Ukraine war. In Afghanistan, over 80 journalists were imprisoned and tortured by the Taliban when they refused to edit their news reports according to their policies. The Prime Minister of Israel – Benjamin Netanyahu has been chastised investigative reporters. There is also evidence of him offering incentives to major media firms to promote his positive image. Likewise, in India, the world’s most populous democracy, the ruling Bharatiya Janata Party (BJP) actively runs campaigns to discourage anti-government speech by filing sedition charges against any journalist who is critical of them. Government-aligned thugs have also attacked journalists’ for criticising the ruling party politicians and state policies.

On the home front, Pakistan ranks poorly in the global press freedom rankings. According to the 2022 edition of the World Press, Freedom Index Pakistan ranked 157 among 180 countries. According to the findings of the report, the country is one of the most dangerous for a journalist working on cases of corruption or illegal trafficking. The recent inhumane murder of Arshad Shareef – a well-known Pakistani journalist in Kenya has raised serious questions on the future of evidence-based journalism, and the freedom of expression in Pakistan. His murder has infused yet another wave of turmoil and polarisation between the media and state institutions.

Keeping in view declining press freedom in Pakistan, threats to the physical safety of journalists, and growing trend of misinformation, there is a need for an apolitical regulatory authority to not only regulate media and journalism in the best national and international interest but also protect journalists’ rights and their freedom of expression, especially investigative reporters. Other steps that can contribute to making media apolitical include promoting media/journalism as a public good, minimising intervention by pressure groups and political elite, training and equipping journalists with life and evidence-saving skills, monitoring and curtailing the provision of illegal incentives, unfair and biased regulatory favours, and preferential treatment to pressurise media outlets.

Since the decline in media freedom is a global phenomenon, there is a need for consultative efforts by state governments and international organisations to work on a framework for ensuring independent and transparent media. Most importantly, there is a dire need for bringing perpetrators of crimes against media personnel to justice to safeguard evidence-based journalism.

Amna Tauhidi is a Research Assistant at the Centre for Aerospace & Security Studies (CASS) in Islamabad, Pakistan. Complete responsibility for the factual accuracy of the data presented and hyperlinked citations lies entirely with the author and not CASS. She can be reached at cass.thinkers@casstt.com