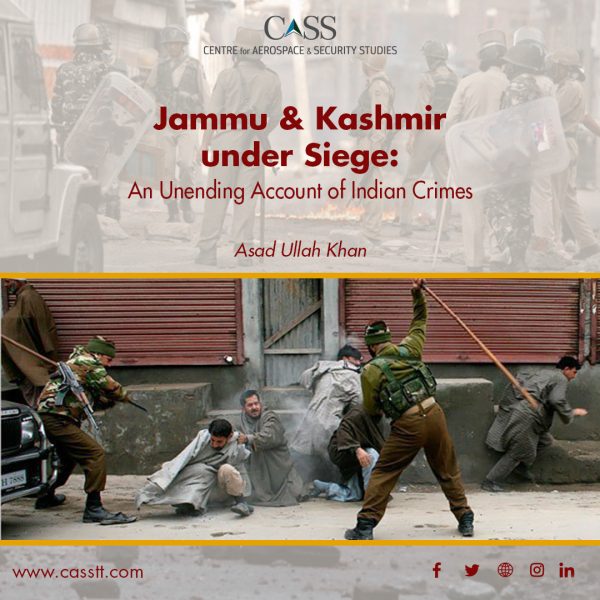 Since coming to power, the Hindu-nationalist BJP government in India has forcibly tried to dismantle the self-proclaimed socially diverse and secular face of the Indian polity. Nowhere has the state oppression against religious minorities seen greater belligerence than in the Muslim-majority Indian Illegally Occupied Jammu & Kashmir (IIOJK). In August 2019, when Prime Minister Narendra Modi revoked the special status of Kashmir – guaranteed by Articles 370 and 35-A – the constitutional protection to Kashmir’s limited autonomy and territorial sovereignty came into jeopardy. Revocation of the these two articles, through a presidential decree, has enabled people from the rest of India to buy property, hold public offices, and permanently reside in occupied Jammu & Kashmir, thereby, altering the demography of the pre-dominantly Muslim region.

Subsequently, the Hindu majoritarian government in New Delhi introduced a fast-track process to ease the criteria for Indian citizens to obtain domiciles in this disputed territory. Moreover, major positions in Kashmir’s top bureaucracy are filled by non-Kashmiri Indians. The fears of demographic transformation (institutionalised through a discriminatory state apparatus) are on the rise with the government preparing to change the delimitation laws, aimed at turning IIOJK Muslim majority into a tiny minority. Exclusionary state practices are, therefore, eroding the distinct religious and ethnic identity of Kashmiris. Fearing strong public resistance against such draconian measures, the state authorities have imposed a military siege to clamp down on dissent. Kashmiris living in such a dire situation routinely endure strict curfews, communication blackouts, heavy surveillance, gender-based violence, torture, and displacement by law enforcement agencies and increasing deployment of troops. However, while such measures have been worsening since revocation IIOJK’s special status, they are not new to Kashmiris who have been living under the yolk of Indian oppression for decades.

Since August 2019, Indian state forces have carried out extrajudicial executions with brazen impunity, targeting civilians, journalists, academics and students. According to the Kashmir Media Service, 7235 custodial killings cases have been reported in the past 30 years. Human Rights Watch considers investigation into extrajudicial killings to be meaningless due to the enforcement of the ‘Armed Forces Special Powers Act’ (AFSPA) that grants special powers to the Indian occupying forces to use heavy-handed tactics against citizens (under the guise of maintaining ‘public order’) with immunity from prosecution for serious abuses. Special legislation, along with other counterterrorism and sedition laws, allow violent crackdowns on innocent people and clampdown on peaceful protests. For instance, the ‘Public Safety Act’ allows detention without trial for up to two years.

Consistent use of pellet guns by Indian security forces, to disperse crowds, raised serious alarm among rights activists and humanitarian agencies. Amnesty International’s briefing in 2017 titled ‘Losing Sight in Kashmir: The Impact of Pellet-Firing Shotguns’ highlighted how pellet use was responsible for damaging eyes/facial features/ears or blinding the sight of hundreds of young Kashmiris. The Indian troops deployed in Kashmir have cared little for humanitarian concerns of the people as evident from the presence of hundreds of mass graves in the Valley. Human rights groups have constantly urged the Indian government to investigate these unidentified graves. According to the Associated Press of Pakistan, mass graves of at least 8652 people were reportedly found in IIOJK believed to be victims of unlawful killings and enforced disappearances.

The militarisation of Kashmiri society has brutalised women, elderly and children as well – as they too often become victims of enforced detentions and indiscriminate torture. Kashmiri women are vulnerable to gender-based violence and rapidly increasing instances of rape by security forces. Rights groups have been concerned about the use of rape as a weapon of war by the Indian security forces with evidence of mass rapes reported by the Human Rights Watch in 2014. The brutalisation of Kashmiri children is another bleak side of the state violence perpetrated against the most innocent in the population. In the past three decades, according to the Kashmir Media Service, 107860 children have been orphaned in one of the most heavily militarised regions in the world.

The United Nations, international human rights agencies, rights groups, and humanitarian activists have reported these crimes while urging the Indian government to refrain from using draconian and oppressive tactics against Kashmiris. However, the Indian authorities and security forces have always approached the Kashmiri question from the lens of national security without caring for the fundamental rights of the Kashmiri people. Militarisation of Kashmiri society – further compounded by the far-right majoritarian approach of the current Indian government – has only laid the seeds for greater resistance and uprising among the Kashmiri people. It is high time that the international community urges the Indian government to accept the counterproductive nature of brutal policies and violent tactics against innocent Kashmiris. Otherwise, their continuous struggle and resistance against Indian oppression would take more lives, consume greater human cost, and spill more blood.

Asad Ullah Khan is a Senior Researcher at the Centre for Aerospace & Security Studies, (CASS), Islamabad, Pakistan. The article was first published in The Nation. He can be reached at cass.thinkers@gmail.com