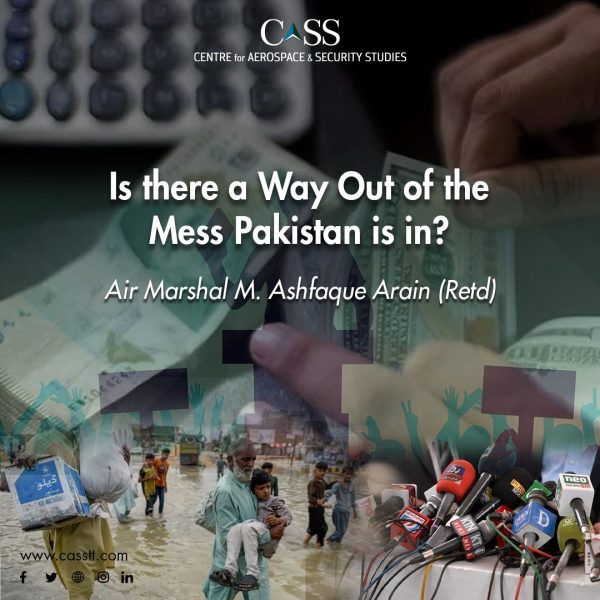 Pakistan today is in a situation never witnessed before during the last 75 years.  Pakistani rupee is depreciating at an unprecedented rate. The depreciation witnessed just in the last three and a half months exceeds highest depreciation in any decade of the country’s existence. Increase in petroleum and gas prices has led to increase in electricity rates. These factors are leading to rise in commodity prices pushing inflation above 37%. Food items and medicines are going beyond the common man’s reach, making their life unsustainable.

According to a debate in the National Assembly, Pakistan’s foreign debt stands at USD 126 billion. While the economy requires urgent financial assistance, the IMF Board is in recess and not likely to meet for the next three weeks. Without an immediate lifeline, continued depreciation of Pak rupee will increase inflation and the economy will continue to hemorrhage. The situation is so dire that calls are being made to the US Deputy Secretary of State requesting the US’ help in early release of the IMF package. While such unprecedented moves show our desperation, they also indicate the incumbent government’s inability to negotiate with international bodies and foreign governments.  In another desperate effort to bring in some foreign exchange, the government has decided to sell some of the national assets under an ordinance. However, when the market value of national assets is below the book value, it will prove to be a wrong decision in the long run. Additionally, such desperation will also help foreign forces in exploiting the situation to their advantage.

As if the economic chaos was not enough, many parts of the country, especially Balochistan, Karachi, some parts of Sindh and Punjab have been devastated by floods. In addition to loss of precious life, properties have been destroyed. The floods will also impact agricultural productivity in the coming season. Untimely rains have impacted maize sowing, which will affect overall production.  While people are suffering, the government announced PKR 1.2 billion for the 75th independence day celebrations, though not sufficient, this money could have been utilised to help people distressed by the floods.

As a result of higher energy prices, frequent power shutdowns and continuous depreciation of the rupee resulting in higher prices of raw materials, industries are unable to operate as well as are becoming uncompetitive in the international market. Because of the recently announced ban on imports, Pakistan’s two major automobile producing units have announced reducing their production by 50%. With the shutting down of industrial units, dwindling exports will further add to the country’s economic woes and widen the gap between import and export bills. Shutting down of the industry and sluggishness in the construction business will also add to unemployment and may create law and order situation. Actions by the government suggest that they neither have a roadmap for economic recovery nor political stability.

On the diplomatic front, Pakistan now stands isolated. During the last three and a half months, no head of the state/government has visited Pakistan, nor have there been any fruitful foreign visits by Pakistani leadership. High-level visits to the US in recent weeks also suggest lack of coordination.

Talks with the IMF have lingered for too long and the final decision is yet not in sight. This uncertainty is leading to speculations and the stock exchange is in freefall while the investors have no trust in the system. Continued currency devaluation-led economic uncertainty and lack of government focus and fake / unverified information floating around on the social media, is resulting in hoarding of commodities and exorbitant prices.

With such negative developments, the political parties are fighting a war for their survival and have forgotten about the plight of the people they represent or the direction in which the country is heading. Federal and provincial governments as well as major political parties are nowhere to be seen in the flood affected areas. The government, instead of focusing on governance, has been working to secure its interests by hastily amending laws and resorting to political engineering to ensure its survival. In addition to mudslinging and using social media platforms to propagate disinformation against opponents, some political parties are also leaving no stone unturned to malign national institutions. While there have been institutional failures, the political parties are endeavouring to exploit the situation to their benefit by pressurising institutions, such as the judiciary.

While Pakistan remains hostage to internal problems, India has made some very swift moves in the economic and military domains. The US has given it waiver from Countering America’s Adversaries Through Sanctions Act (CAATSA) and India can now purchase S-400 missile defence system from Russia without fear of sanctions. India is also importing crude oil from Russia at reduced rates. Taking advantage of the situation, India has also initiated negotiations with the Taliban government in Afghanistan. All these steps are detrimental to Pakistan’s interests.

If the situation continues like this, it will be too difficult to come out of the economic mess as well as political polarisation. Combined effect of these two failures could lead to anarchy, something unacceptable in a nuclear state. In the national interest, political leadership needs to show statesmanship and wisdom and let go their egos. They need to sit together and negotiate a way forward in the national interest, foregoing their party or personal interests. All institutions, of any consequence, must adhere to their defined roles and discharge their responsibilities to the best of their abilities with fairness and without succumbing to any pressures. If need be, they must give up their past practices if those have proven prejudicial to national interest.  Mainstream media and social media must be held accountable for propagating fake news, spread of propaganda and misinformation.

Air Marshal M Ashfaque Arain (Retd) is Advisor to Chief of the Air Staff on CASS Affairs and is also Director of the Emerging Technologies programme at the Centre for Aerospace & Security Studies (CASS), Islamabad, Pakistan.