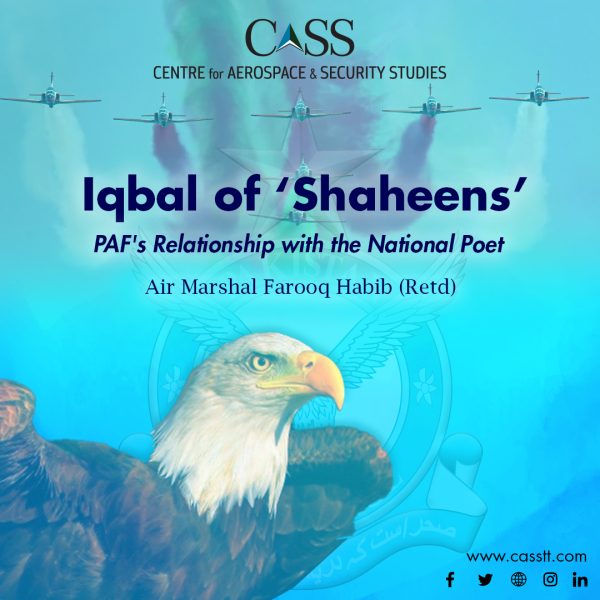 It is rather surprising that the person who has most profoundly influenced the ethos of Pakistan Air Force (PAF) is neither an aviation guru nor a military genius.  This unique honour belongs to Dr Muhammad Iqbal, whose poetry is a constant source of inspiration for the PAF and its personnel.

While he is commonly regarded as the national poet of Pakistan, the appeal of Iqbal’s poetry cuts across geographical and even, ideological bounds. Sarojini Naidu, one-time President of the Indian National Congress and an important figure in the Indian freedom movement, called him the ‘Poet Laureate of Asia’.  In Iran, where he is commonly known as ‘Iqbal-e-Lahuri’, his poetry was a major source of motivation during the revolution for the intelligentsia and common people alike.  The universality of Iqbal can be gauged from the fact that his philosophy is embraced by conservatives, modernists, and socialists with the same passion.  But a rare attribute of Iqbal’s poetry is its lasting influence on the ideals of a fighting Service like PAF.  As we celebrate Iqbal’s 145th birth anniversary this month, it would be worthwhile to refresh his message in the context of PAF.

Iqbal, in the words of renowned scholar, Ahmed Javed, is unique amongst intellectuals in Islamic history who not only understood the message of Islam in its true perspective, but importantly, was also successful in preserving its essence in its pristine purity through his poetry.  This makes his work a great resource for times to come.

Iqbal’s poetry is distinct, not merely in terms of the quality of its content, but stands out equally grander because of its style, imagery, and allegory.  The rarity of such a blend of form and substance makes Iqbal one of the greatest Urdu and Persian poet of all times. The profound relationship between Iqbal and the PAF can be attributed to both these factors.

Air Marshal Asghar Khan, the first Pakistani Commander-in-Chief of the PAF, realizing, that PAF would always be challenged by a numerically superior enemy, had outlined the dictum ‘train to fight outnumbered’. This premise, according to Air Chief Marshal Jamal Ahmed Khan, has remained central to PAF’s operational doctrines.  Iqbal’s message of dynamism, ceaseless struggle, khudi (self-actualisation), pursuit of excellence, disciplined life and attainment of faith provides the intellectual and spiritual underpinnings for the PAF’s doctrinal thought. Time and again, the PAF warriors, inspired by Iqbal’s spirited poetry have demonstrated their outstanding skills to subdue their numerically superior adversary, a glimpse of which was witnessed in the heroic display on 27th February, 2019.  Iqbal beautifully encapsulates the spirit of these asymmetrical battles in the following couplet:

‘The flashing sword of the ‘Self’, honed with the whetstone of spirituality

Makes the swift strike by a soldier, tantamount to the exploits of a whole army’

PAF’s relationship with Iqbal can also be explained on the basis of the symbols and diction used extensively in his poetry which connects perfectly with the PAF’s identity.  A pertinent illustration of this linkage is the symbol of ‘Shaheen’ (Eagle), which holds a special significance in Iqbal’s poetry, while also being regarded as the characteristic emblem of PAF.  Shaheen is a charismatic bird frequently represented in Iqbal’s poetry, whose attributes of valour, grace, speed, hunting skills, endurance, domination, and freedom are expressively used by him to infuse a daring spirit in the youth while simultaneously disapproving the tendencies of status quo, ‘passivity and sloth’.

‘Nesting in palace walls, My boy, behoves you no more

Your home is in craggy mountains high! Where the hunting eagles soar’

Shaheen embodies every trait that PAF aspires to instil in its young combatants. The reason is that while there are numerous species of birds, the Shaheen stands out for its fearlessness, hunting skills and domination of the skies.  So do the PAF warriors.

‘Though both glide in the same blue sky

The lofty Hunting Eagle & the vulture, are in reality, world apart’

There are numerous other phrases and idioms commonly resonating in Iqbal’s poetry which strike a chord with PAF’s fraternity, for example, zouq-e-parvaz (passion of flying), lazzat-e-parvaz (penchant for flying), uqabi-ruh (indomitable spirit), wusat-e-aflak (boundless skies). Though written for all readership, such expressions are perhaps best understood and hence, become a source of motivation, in the context of professional experience of PAF’s community. For them, Iqbal’s poetry transcends the status of informational or literary knowledge. It becomes, indeed, a lived experience.

There is yet another dimension of Iqbal’s philosophy which carries even greater significance for the PAF. Besides expounding his idea of khudi (self-actualisation) which relates to the consciousness, development and expression of one’s own being, Iqbal also theorised the concept of bekhudi  (Selflessness) which represents the spirit of ‘self-surrender’ and the ‘sacrifice of self’ for the greater good and cause of society. For every member of the PAF, Iqbal’s ‘concept of selflessness’ is an assertion of their sacrosanct pledge to ‘Live for, Fight for and Die for’ their ‘Faith, Country and the PAF’.

Air Marshal Farooq Habib (Retd) is presently working as Senior Director at the Centre for Aerospace & Security Studies (CASS), Islamabad, Pakistan. The article was first published in Pakistan Observer. He can be reached at dir.nationalsec@casstt.com.

According to a study, the average human being spends around 90,000 hours of life at work. Hence, it is important to understand how the work
172 views