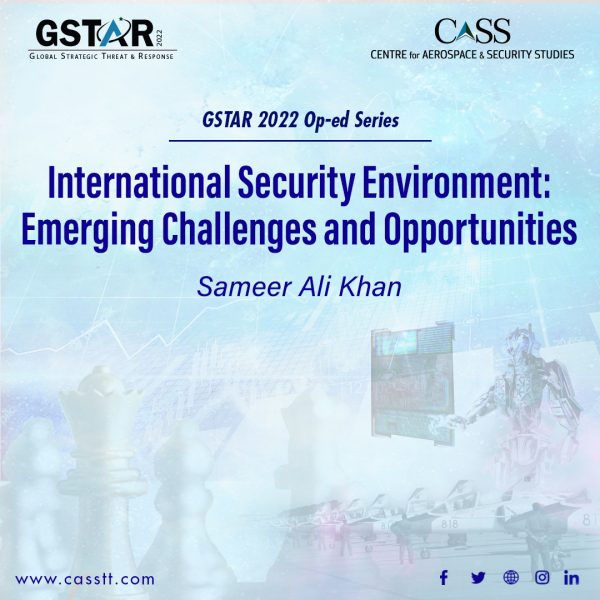 Recent international security issues like the Russia-Ukraine war, brinkmanship on Taiwan issue, US-China rivalry, Indo-Pacific Strategy, aggressive North Korean testing of strategic capabilities, and uncertain Afghanistan situation, among others, are manifestations of extreme geopolitical polarisation where states are taking unilateral rather than cooperative approaches to addressing issues at hand.

In the contemporary context of intensifying geopolitical competitions, the Centre for Aerospace & Security Studies (CASS) is organising an international conference ‘Global Strategic Threat and Response’ (GSTAR) 2022 from 19-20 October 2022. The first working session of the two-day international conference will cover the international security environment and its emerging challenges and opportunities. The first session kicks off with Ambassador Robin L. Raphel’s discussion of ‘The US Indo-Pacific Strategy: Implications for International Security.’ With her unique experience of being Assistant Secretary of State for South Asia and working in both India and Pakistan, she is one of the suitably experienced persons to make meaningful comments on the subject.

Concerns have been expressed by the US and other Western capitals over Pakistan’s non-participation in the United Nations’ resolutions condemning Russian aggression against Ukraine. While Pakistani leadership has condemned the war and called for peaceful resolution, it has followed a neutral position. One obvious reason is the fact that Pakistan has been trying to normalise its relations with Russia for over two decades now. Over the same period, Pakistan’s relationship with the US witnessed highs and lows. A major Pakistani discontent remains the exceptional treatment that the US has been extending to India. Ironically, for Pakistanis, the most surprising aspect is that India, with a higher degree of alignment with the West, has followed a similar non-committal approach on Russia but expectations from Pakistan remain higher.

Over the recent years, US shift towards an ‘Indo-Pacific’ strategy has been at the heart of various global and regional realignments. In an attempt to counter China’s rise, the US is looking to join hands with regional partners – especially those weary of the former’s rise. Amid this competitive and often aggressive posturing, our neighbour sits at the receiving end of foreign cooperation to advance its military, economic and political might. However, the consequently emerging regional imbalance furthers Indian hegemonic designs where it prefers use of force over amicable resolution of outstanding disputes.

While the US presents its ‘Indo-Pacific strategy’ as a harbinger of peace, stability, and implementation of a rules-based order in the region, China presents an equally fascinating alternative of relying on regional integration to advance shared security, peace and economy. Prof. Dr Yan Xuetong, Dean, Institute of International Relations (Tsinghua University, China), will be presenting the Chinese vision for regional peace and security in the evolving geostrategic environment. China being a bigger stakeholder in regional peace and stability, compared to any single Western state or group, has to be a part of regional solutions for them to be sustainable.

While choosing between Russia and the US (over the Ukraine war) may be a no-brainer for most Pakistanis owing to the historical relationship with the latter, a similar straightforward decision may not be feasible when it comes to choosing between China and the US. Owing to its historical ties with both the US and China, there has been immense pressure on Pakistan to reconsider its relationship with the latter. Lately, various Pakistani officials and leaders have tried to underscore the fact that Pakistan does not want to align itself with either camp. Logically, the last speaker for this session, Ambassador Riaz Muhammad Khan (Pakistan’s former Foreign Secretary), will address the critical question of US-China rivalry and options for Pakistan. For Pakistan, maintaining long lasting and friction-free relations with both the US and China is of paramount importance.

The geopolitical divide (with Joe Biden, Vladmir Putin, and Xi Jinping as the key players) is alarming. The Russia-Ukraine war continues to prolong; China-US rivalry is manifesting in semiconductors, and trade and tariff wars besides formation of new alliances such as Quad and AUKUS; and Afghanistan remains an unstable country with minimal possibilities of internal security for its people or foreign investors to engage in infrastructure development. These are significant issues for international peace and security that require cooperative arrangements rather than divisive politics.

The two-day international conference – that will also be live streamed – will focus on these and various other international issues relating to geoeconomics, emerging technologies, and aerospace security etc. By bringing experts from around the world, CASS seeks to diversify and democratise the debate on security issues. Hopefully, this endeavour, along with others led by various Pakistani think tanks, will enable informed decisions on issues that have national, regional and global significance.

Sameer Ali Khan is a Senior Research Associate at the Centre for Aerospace & Security Studies (CASS), Islamabad, Pakistan. The article was first published in the Nation.