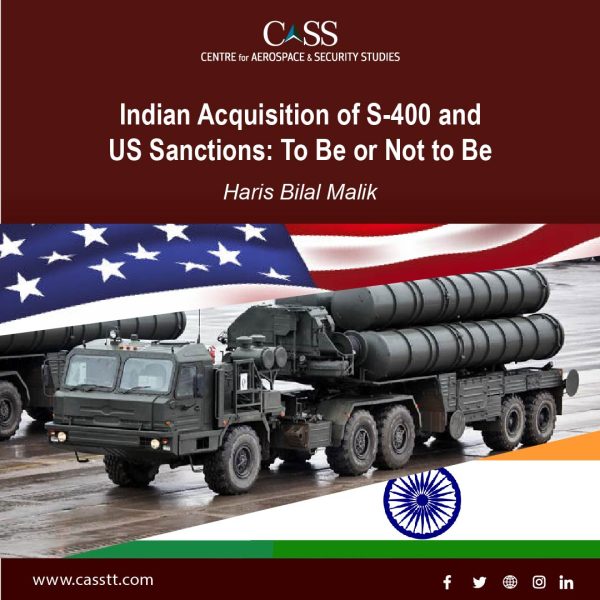 Given India’s acquisition of the S-400 air defence system from Russia, one may argue that it might complicate Indo-US strategic relations, especially against the backdrop of prospective sanctions by the United States (US). For instance, when in late 2021, several Indian and Russian media outlets reported that India was all set to receive the first of five units of the S-400 system under a deal worth USD 5.4 billion finalised back in October 2018, Washington was not happy at all. Deputy Secretary of State Wendy Sherman termed the sale ‘dangerous’ and ‘not in anybody’s interest’, while the Pentagon was also concerned about the development. Since the system is all set to become operational, it is important to analyse the likelihood of US sanctions on India, especially since the acquisition is also crucial in light of future Indo-US strategic relations as well.

Many in India have feared that India may face US sanctions under her Countering America’s Adversaries through Sanctions Act (CAATSA) just like Turkey which, despite being a NATO ally, was sanctioned by the US when it acquired the same system from Russia. According to a study, Turkish defence industry had suffered due to US sanctions. For instance, as a result of these sanctions, a USD 1.5 billion deal with Pakistan for the sale of 30 T-129 helicopters has been disrupted due to export license issues and the deal remain uncertain to date.

Under CAATSA, the US can impose sanctions on any country which opts for a deal involving financial transactions with Iran, North Korea, and Russia. In this regard, since India purchased Russian military hardware, the Biden administration can impose sanctions. However, this has not happened possibly due to the relevance of New Delhi for their shared objective of countering China in the Asia-Pacific region. This was evident following a recent testimony titled ‘World Wide Threat Assessment’ of the US Senate’s Armed Services Committee, in which Lieutenant General Scott Berrier, Director of the Defence Intelligence Agency maintained that India intends to operationalise the S-400 against Pakistan and China by June this year considering threats from both countries. Instead of reprimanding New Delhi, he acknowledged her threat perception vis-à-vis Pakistan and China. The testimony also considered other Indian military developments, for instance, hypersonic and cruise missiles, space capabilities, and its role in ensuring stability and promoting prosperity in the Asia-Pacific.

Furthermore, it would be pertinent to highlight yet another recent and especially important development in this regard. The US Secretary of State Antony Blinken also asserted during the latest 2+2 ministerial meeting between both countries that the US has yet to decide either to sanction India or not. He specifically cited that regardless of the long history of New Delhi’s relations with Moscow, the US and India were security partners now. This implies that policymakers in the US realise India’s strategic significance while being careful not to harm their strategic relations.

Over the years, both the US and India, have increased their cooperation on a diverse range of issues from diplomatic, security, trade, defence, regional cooperation, non-proliferation, democratic values, climate change, counterterrorism, energy, education, and science and technology, among others. The US appears unwilling to compromise on this growing strategic cooperation.

In the same vein, in late 2021, two US Senators – John Cornyn, a Republican, and Mark Warner, a Democratic – wrote a letter to President Biden urging him not to impose sanctions on India for its purchase of the S-400 system claiming that this was in the US’ national security interest and broader cooperation between the two countries. Both senators are co-chairs of the India Caucus – a powerful and only country-specific lobbying group – and maintained that the imposition of CAATSA could impact the strategic partnership. Indian lobbying is evident here as the Senators carefully asserted that even though India has remained heavily dependent on Russian military hardware, it has significantly reduced its dependence on the latter. They went to on to claim that Indian intent to purchase the US’ military hardware has considerably increased in recent years. So, imposing sanctions at this time might result in disruption of increasing US-India cooperation in various domains. This is indicative that India clearly holds immense significance and enjoys considerable influence in US policy circles through efficient and timely lobbying.

While at the political level, as of now, there appears no chance of US sanctions on India since it has emerged as an important defence market and partner in pursuit of the latter’s regional agenda in the Asia-Pacific.

While Islamabad may not be in a strong position to balance New Delhi’s political clout in D.C.’s power corridors, it needs to focus on developing plausible and cost-effective countermeasures to the S-400.

The author is a researcher at the Centre for Aerospace & Security Studies (CASS), Islamabad, Pakistan. He can be reached at cass.thinkers@gmail.com