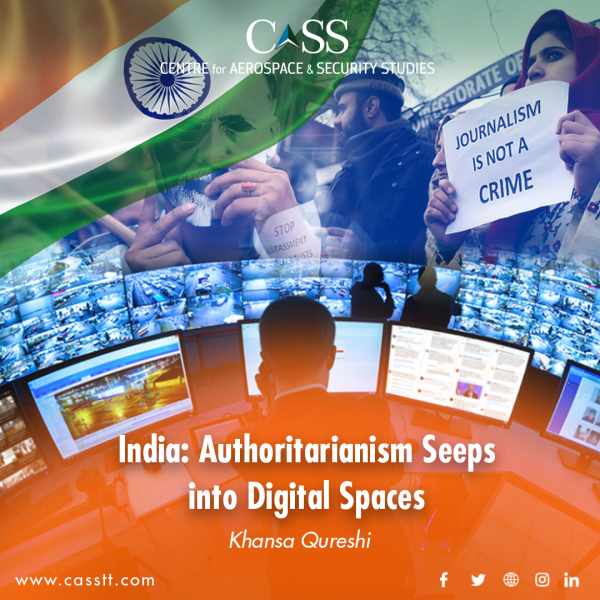 Democratic values are withering around the world. The curbs on freedom of speech, expression, and assembly, etc., are becoming tighter by the day. While these trends have been prevalent in autocratic environments, a more troubling phenomenon is the rise of autocratic ideologies in principally democratic states.

One such – and a rather glaring – example is that of India, which has long called itself the largest secular democracy in the world. However, lately things have been leaning towards the other end of the spectrum. The rise to power of BJP-led government in India, feeding on fascist Hindutva ideology opened floodgates of violence against other religious minorities, especially Muslims.  Meanwhile, any criticism against this violence and fascist tendencies is not tolerated as well and results in persecution of the critics. Global watchdogs monitoring political, human, and other rights and liberties have consistently been downgrading India’s ranking on different democracy indices, essentially labelling it as an ‘electoral autocracy’ instead of a democracy.

While authoritarianism in real life is on perpetual increase in India, lately it has also been seeping into online spaces in a phenomenon called ‘Digital Authoritarianism’, restricting internet freedom. Digital authoritarianism is defined as, ‘use of the Internet and related digital technologies by leaders with authoritarian tendencies to decrease trust in public institutions, increase social and political control, and/or undermine civil liberties.’ India accounts for 58% of all instances of internet shutdowns in the world, which were more than any other nation for the fourth year in a row. India’s government has also employed the infamous Pegasus spyware for surveillance and targeting of journalists, activists, or political opponents.

Moreover, the blocking of accounts on various social media sites – particularly Twitter – has become a new normal in the country. In 2020, it blocked more than 9,000 social media accounts or URLs. In a most ironic development, New Delhi ordered Twitter to take down tweets posted by Freedom House on the subject of declining internet freedom in the country. Similarly, tweets criticising India’s handling of COVID-19  were removed on government orders. Twitter also blocked numerous accounts linked to the farmer protests on ‘request’ from Indian authorities.

In the same manner, most recently, Twitter accounts of journalist CJ Werleman and a Pakistani-British reporter Murtaza Ali Shah were also withheld in India. Werleman routinely writes against the oppression of minorities in India, meanwhile, Shah’s account was targeted because he covered Kashmir and Khalistan related content. The method of implementing digital curbs is not just limited to online tools. Rather, the censor regime has the means to employ physical force in real life as well. Indian authorities arrested Mohammad Zubair, who co-founded Alt News, a fact-checking site focusing on content spreading misinformation on mainstream media.

Rana Ayyub, a prominent voice against oppression of minorities in India, routinely gets targeted by Indian authorities. She is also regularly subjected to online persecution by the subscribers of far-right, extremist Hindutva ideology. While Twitter readily blocks the accounts of these activists, as it recently withheld Ayyub’s account, it seldom addresses their concerns about online abuse and harassment.

The implementation of curbs is also not limited to individuals alone. Pakistan has also been victim of India’s digital fascism as official accounts of Pakistani missions in UN, Turkiye, Iran and Egypt were withheld in the country. This raises question marks on Twitter’s credibility as well which withheld the accounts representing a state actor, with zero violation of any online or Indian laws.

Similarly, one of the most prominent video sharing sites ‘YouTube’ also removed a song released by the slain Punjabi rapper Sidhu Moose Wala highlighting the ‘Sutlej-Yamuna Link canal dispute in Punjab as well as the 1984 Sikh genocide.’ Earlier, YouTube also blocked 16 news channels with 10 based in India and 6 from Pakistan.

While blocking accounts like this is an attack on fundamental rights to information, it also ultimately worsens the plight of vulnerable communities whose persecution these voices (accounts) tried to bring to the world’s attention in the first place. In essence, India’s digital landscape helps keep a lid on information about persecution of certain groups at the hands of Indian institutions. Same is the case with standing idle while online places turn into platforms for disseminating hatred against certain accounts or groups. There has been jarring outbreak of violence against ethnic, and religious minorities in some countries including India, ignited because of hateful propaganda spread online.

It must also be noted that relenting behaviour of online platforms remains questionable. These firms have invested billions of dollars in India, which is a huge market with more than 640 million internet users, fast approaching a billion-user mark. Therefore, it is only natural that they wouldn’t want to lose the goodwill of authorities in such a space.

As far as the world turning a blind eye to India’s online principles is concerned, the self-purported leaders of the free and liberal world such as the United States (US), United Kingdom, Canada and Australia are also guilty of employing the digital authoritarian tool kit . Moreover, India has avoided punitive measures for harming US’ interests just by virtue of its geostrategic significance for the US’ Asia-Pacific strategies. In such scenario, it would be unwise to expect reprimand for India over its digital policies.

Policies manifesting ‘digital authoritarianism’ reflect real-life fascist policies to have wider control over narratives, to not get criticised and get away with the most blatant violations of human rights. Hence, they won’t disappear as long as real-life policies are not re-aimed at upholding basic human liberties. However, this is unlikely to happen anytime soon in India as long as the BJP-led government remains in power.

Khansa Qureshi is a Researcher at the Centre for Aerospace & Security Studies (CASS), Islamabad, Pakistan. She can be reached at cass.thinkers@gmail.com.