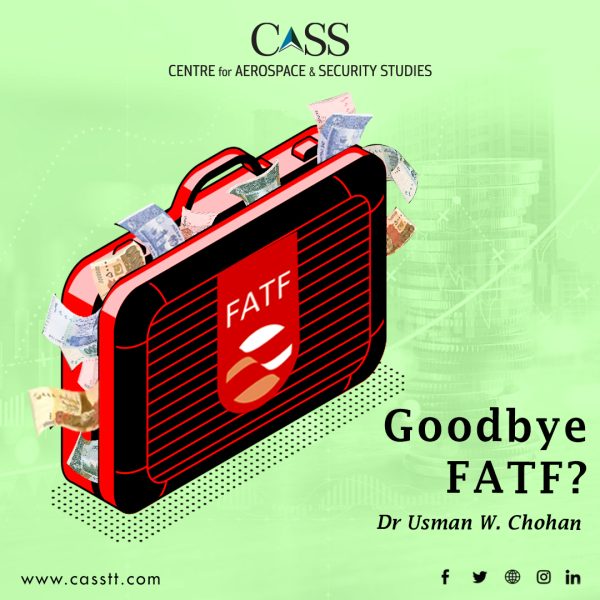 It was with a sense of jubilation that the media and public discourse in Pakistan announced the country’s exit from the so-called “gray list” of the Financial Action Task Force (FATF), a financial watchdog which had long put the country in its crosshairs, and perhaps unduly and excessively so. Finally, one is told, Pakistan’s many efforts at improving its financial system were being recognized by the international community. Indeed, the scope of reforms that the country has taken is enormous and substantive, involving: greater institutional coordination, a wider panorama of oversight, tougher sanctions for violations, a comprehensive legal and regulatory architecture, higher compliance costs for banks, and instilling of a culture of proactiveness among relevant agents in the system.

It was a long time coming, in a sense, since several previous plenaries of the FATF offered ample grounds to free Pakistan from the gray list. Pakistan’s “black economy” is in fact not very large, whether in absolute or relative terms, and nor are the AML/CFT risks so high when seen in a global context. In absolute terms, Pakistan’s black economy is a drop in the ocean compared to the worst violators, which includes India, whose black economy is larger than the entire economy of Denmark, UAE, or Malaysia. In relative terms, Pakistan’s black economy is small in proportion for a developing country, particularly when compared with something like Afghanistan, whose entire economy has gone informal since the American handouts stopped.

So the targeting of Pakistan’s economy was unreasonable to begin with, at least on the merits of the informal economy and the anti-money laundering / countering terrorist financing (AML/CFT) conditions. It would have made far more sense to target India or Afghanistan if one were serious about AML/CFT in South Asia.  The FATF is unlikely to pursue those agents because it has been weaponized and politicized to an excessive degree. India’s External Minister Jaishankar has said as much to his party cabal. But this also means that the FATF is not an association fit for its duties. Those duties themselves have morphed continuously over the past four decades. The FATF originated during the height of the so-called “War on Drugs” to combat narcotrafficking. It then pivoted after 9/11 to the so-called “War on Terror,” moving thereafter to nuclear anti-proliferation (where India would perhaps be the worst offender). Nowadays, it is also prescribing strictures on cryptocurrencies and virtual assets. Who knows what else it will take on and fail at in the future.

The politicization of the FATF is something now well understood by politicians, bureaucrats, and civil society. There was considerable pushback towards the FATF’s dirty politics, but at the same time, an effort was made to improve the financial system. It was a dual-strategy of compliance and resistance, and it has made Pakistan’s systems stronger in the end. Ironically, this in fact lends credence to the European view of financial sanctions: they work. If Pakistan had not been targeted so severely, it would not have taken the steps to reform its financial oversight mechanisms. Sadly, it wouldn’t budge with the carrots, and so it needed the stick. If AML/CFT mechanisms were properly implemented, even as per laws set even in the 1990s, then Pakistan would not have left such a weak link open to exploitation.

This raises the long-term question of the sort of society we want: is it that we shall wait until we are forcefully coerced into fixing our problems that we will finally budge? Or should we work towards building a better system in anticipation and then thrive in it? It would indeed be better to follow a carrot-based approach rather wait for the stick, especially when the annual damage to the economy (according to a 2020 government estimate) was $10 billion dollars per year.

However, if one takes a step back and looks at the larger picture of the world economy, which is rampant in its inequalities and inequities, one will not find the solutions to money-laundering by sanctioning any developing country. The worst money-launderers have nothing to do with a country like ours. They reside and thrive in the tax havens and “fiscal paradises” that have siphoned up to $40 trillion (Trillion with a T) thus far, including: Delaware, the Isle of Man, Switzerland, Cayman Islands, Panama, and London, among others. These are a bane to the global economic system and worsen the crises that have emerged since Covid-19. As such, fixing the global AML/CFT crises will require less attention to the long beards and large turbans, and more attention towards the pinstripe suits and limousines.

Nevertheless, leaving the gray list is no assurance of respite in the future. Pakistan has been on the FATF’s watchlist three times in the past twenty years, coinciding uncannily with ruptures in US-Pak relations. Although the reforms undertaken in this round are multistakeholder in nature and important for our economic security, it should be remembered that financial oversight is a continuous progress, and grave lapses at any point can result in revaluation. It is more a function of the mindset with which agents in society operate, and we are a stick-driven society. This means that we should not say “goodbye,” but perhaps “see you later.” For its part, the FATF is an evolving body which may add new bells and whistles to its remit, even if it has tragically failed at everything thus far least in anti-money laundering. But this won’t stop it from being a nuisance in the future, and meanwhile, the global financial system’s inequities continue to worsen.

Dr. Usman W. Chohan is the Director for Economic Affairs and National Development at the Centre for Aerospace & Security Studies (CASS), Islamabad, Pakistan. The article was first published in The Gulf Observer.