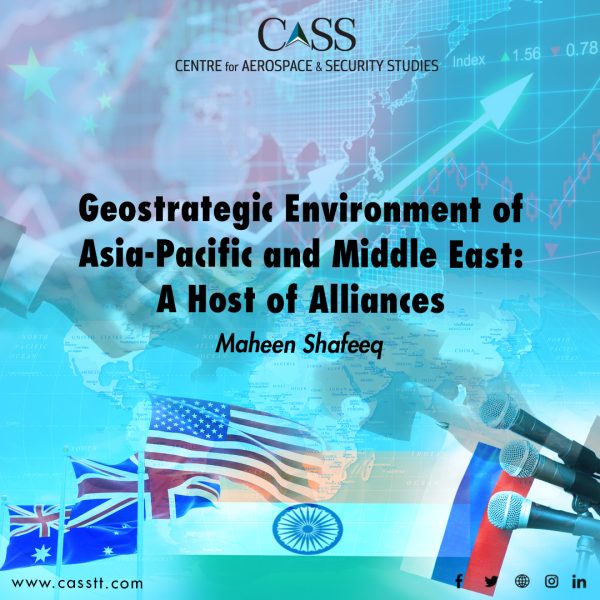 The present era does not show promising signs of the end nor the start of an era. Instead, it appears to be a transitional period for a new international order. This transition period is experiencing growing strategic rivalry among major powers such as the United States (US), China and Russia, which has expanded the importance and role of middle powers (UK, Japan, France, Germany, Australia etc.), that have a clear inclination towards either of the major powers.

The US National Security Strategy released in October 2022 categorised China as a competitor and Russia as an immediate threat. While Russia is re-asserting its power in Eastern Europe (and elsewhere as well, albeit quietly), the US and China are building strategic and economic alliances and exporting their competition in many regions worldwide. Their oft-called ‘rivalry’ has a gravitational pull that is dragging states that do not wish to join camp politics. While these states attempt to balance their relations with the major powers, the middle powers are in a difficult position.

The competition between US and China has become a chessboard in the Asia-Pacific region, while the Ukraine War in Eastern Europe has become a central stage of resurgent Russia. The US is ominously engrossed in building new and strengthening old strategic alliances to defend its national interest. At the same time, China is captivated by expanding infrastructural build-up around the world, to put all the important pearls (harbours) in a single string (route). This environment of deteriorating relations among the major powers is exacting a toll on the international security climate.

To counter the presumed expansion plan of China in the Asia-Pacific; the US, UK, and Australia announced the AUKUS partnership in September 2021. A one-year review of the AUKUS partnership revealed that by March 2023, Australia would receive conventionally armed but nuclear-powered submarines (SSNs) to build deterrence in the region. Although nuclear-powered submarines have raised eyebrows in the international community, an International Atomic Energy Agency (IAEA) report expressed its satisfaction over the issue and observed that Australia would maintain high standards of nuclear safety, security and safeguards. China is concerned that this is a violation of the Nuclear Non-proliferation Treaty (NPT) and stated that the use of nuclear material for defence by a non-nuclear weapon state falls within the jurisdiction of the NPT. The delivery of submarines has not only irked Beijing but has also complicated France-Australia-US relations. French President, on the day of the announcement of AUKUS, voiced feelings of betrayal of trust by an old ally as Australia revoked its diesel-powered submarines contract with his country. The US has prioritised Australia for supplying SSNs due to its geostrategic location in order to counter Chinese influence. Australia is also part of the Quadrilateral Security Dialogue (QUAD) – an alliance between the US, Australia, India, and Japan. The QAUD agenda prioritises building a more robust economic security, cybersecurity, energy security and environment and health security in the Asia-Pacific region. QAUD was duplicated in the Middle East to create I2U2 (US, United Arab Emirates (UAE), India and Israel) security arrangement. This alliance aims to counter growing Chinese influence in the Middle East and prioritises the agenda of cooperation on 5G technologies, space, nuclear power and technologically advanced military hardware such as drones. Although the US has been attempting to bring the Middle East under its influence, yet till now, India and UAE are apparently being driven by their national interests rather than external influence or pressure. The QAUD ME has failed to maintain a unified stance on the Ukraine war. Apparently, all constituent states have joined this partnership; however, they are unwilling to share their support where their national interests are not being served. The war in Ukraine has received strong criticism from the West. However, Abu Dhabi remained neutral on the issue, while New Delhi, despite pressure from the West, exhibited a pro-Russian tilt in the Ukraine war.

This shows that the security environment in Asia-Pacific and ME is passing through an unsteady transitional phase and the trajectory of regional order remains irregular and unpredictable. Furthermore, the tug-of-influence in the Asia-Pacific is active. Likewise, the growing coziness of Russia-India, and China-UAE, especially in defence trade, could be a complex subject for US-India and US-UAE relations.

The present play of geopolitics and rivalries is an important part of the transitional phase before the world order docks. Under the above-illustrated circumstances, the struggle for power and dominance between the great powers shall remain intense. Nonetheless, with maturity of thought and action, this phase can be passed with peaceful co-existence and cooperation instead of rivalry and war.

Maheen Shafeeq is a Research Assistant at the Centre for Aerospace & Security Studies (CASS), Islamabad, Pakistan. She can be reached at cass.thinkers@casstt.com.

At a time when the economy is going through an acute crisis; when households, industries, and the government are all feeling a severe pinch, some scholars
282 views