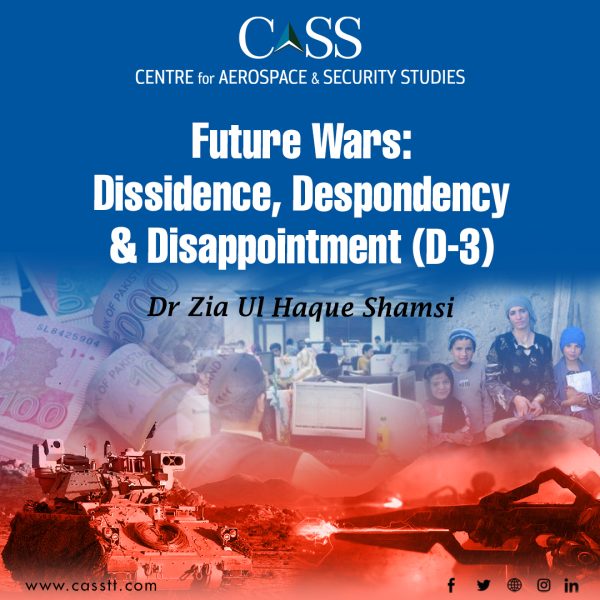 The changing nature and character of modern warfare have forced belligerents to alter their course of action to achieve their political objectives without spending too much on war machines. However, 21st-century wars have been equally expensive for the attackers as well as the defenders: attackers for employing extremely costly weapon systems, and defenders for suffering greatly as a result of the attacker’s might. Several countries have been destroyed and may never be the same, no matter who initiated it and who won. The people of Iraq, Libya, Yemen, Syria, and Afghanistan have suffered immensely, particularly in the domain of social development.

Iraq, Yemen, and Syria were model Islamic societies. Since the 7th century A.D., they have served as prehistoric civilisations’ beacons and as a launchpad for the spread of Islam. All these states have nearly lost the true colour of their rich cultural history, and several historic buildings have been destroyed beyond repair.

Afghanistan, on the other hand, has been subjected to numerous invasions in its history, but the last four decades have been particularly cruel to its people. Millions of Afghans left their ancestral homes and took refuge wherever they found a decent space. The country’s infrastructure has been destroyed, and even after two decades of occupation by the US-led Western world, the new Afghan government remains unrecognized.

Since decolonization began, time and again, it has been proven that occupation of captured land is extremely expensive and perhaps counter-productive, no matter how rich the invaded country is in terms of hydrocarbons and natural resources. Afghanistan and Iraq are recent examples. Occupants may have wanted to stay on the ground but eventually had to leave.

The noise about “hybrid warfare,” though the concept is as old as warfare itself, is perhaps intended to mitigate the exorbitant expenditures on modern-day military campaigns alongside issues related to warfare and the human and material losses incurred during the violence. However, hybrid warfare that is launched in synergy with a media campaign, economic coercion, cyber-attacks, espionage, political interference, electrical engineering, and limited military intervention, if required, may be less expensive and be able to avoid international laws. The purpose would be to initiate dissidence, despondency, and disappointment (D3) among the populace of the target state. By doing so, the perpetrators can cause great harm to the target state without raising alarm bells among international institutions, and with considerably reduced expenditures on the war effort.

The motivation behind generating D3 on the part of the perpetrators is to create unrest in the target state, and doubts in the minds of the people that the state is failing to protect their interests, lives, and properties. Most of the time, it is done through local operators, as India has done against Pakistan over the last two decades, as European watchdog DisInfoLab revealed in their “Indian Chronicles” report. As many as 750 fake websites were created to defame Pakistan and China in the West. By doing so, India was able to avoid worldwide criticism and easily reject Pakistani allegations about its activities inside Pakistan, particularly in Karachi and Balochistan. Likewise, on the economic front, it has now been accepted by Indian officials that they were resisting the removal of Pakistan’s name from the gray list of the Financial Action Task Force (FATF) even after the country had complied with the majority of the action points required.

During the Sri Lankan economic crisis, too, the people of the island were made to feel disenchanted by the government of the day and therefore became extremely agitated in a short period. The same was witnessed in the Argentine Republic in 2001-02.

Pakistan may have come out of the FATF’s grey list, but its enemies are not letting it off the hook. Continued political crises are fueling economic difficulties with rising inflation, and falling currencies leading to poverty due to lack of employment, complemented by natural disasters like floods, and the return of cross-border attacks on security personnel and threats to settled areas.

All of the above are fodder for D3, and the fear is that these may further aggravate the situation with forecasts of the global recession in 2023. Moreover, Pakistan’s youth bulge has some 64 percent of people below the age of 30 and 29 percent between 15 and 29. This means the country can go either way: productivity if job opportunities are available, and destructivity if youth remains unemployed, thereby raising the probability of falling prey to negative propaganda. Therefore, it is strongly recommended that the people responsible to fix the affairs of the state keep D3 in mind while making strategies to counter enemy designs, rising terrorism as well as economic recovery through political stability.

Dr Zia Ul Haque Shamsi is the author of ‘Nuclear Deterrence and Conflict Management Between India and Pakistan’ and ‘South Asia Needs Hybrid Peace.’ He is presently working as Director (Peace and Conflict Studies) at the Centre for Aerospace & Security Studies (CASS), Islamabad, Pakistan. The article was first published in Daily Times. He can be contacted at: dir.pcs@casstt.com