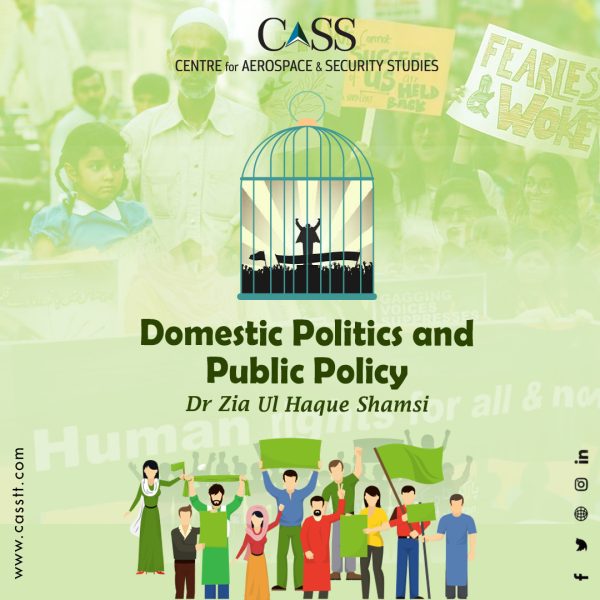 In a recently published book by the National University of Sciences & Technology, my chapter on “Domestic Politics in Hybrid War” asserts that domestic politics of any state dominates the crafting of nearly all other public policies, including foreign and defence. However, relatively weaker states, particularly in the developing world at times end up compromising their national interests to gain ground in domestic politics. In fact, domestic politics is often based on the overriding self-interests of the ruling elite, and no political party or leader willingly cedes power. However, the states which do not compromise on their national interests, often face the trauma of foreign interference by global actors and end up sacrificing the progress and prosperity of the nation.

Theoretically, Public policy can be generally defined as a system of laws, regulatory measures, courses of action, and funding priorities concerning a given topic promulgated by a governmental entity or its representatives.’ Practically, domestic politics dominates each of these domains of public policy. However, policies that affect the economic well-being of the common citizen, perhaps matter the most. That does not mean that lawfare is less important, particularly in developed societies. In the recently concluded US Mid-term Elections, Abortion Rights figured prominently in the results, thus blocking the red wave that was expected. This happened at a time when inflation is very high and the US economy is suffering from the impact of a global economic slowdown.

Voters in the West usually exercise their judgement on issue-based domestic politics. While the economy heads the priority list with inflation and cost of living, social sector development, employment opportunities, legal rights, education loans, health bills etc. usually dominate the debating forums. Interestingly, foreign policy may figure prominently during US Presidential election debates. Still, people do not give too much importance to it at the time of choosing winners, unless the Presidential candidate creates a national security fear among the people as President Bush did in the post-9/11 environment. Contrarily, one can recall George H. W. Bush’s defeat in the November 1992 US Elections after he had won the Gulf War I, primarily because of challenger Bill Clinton’s emphasis on the American economy which appealed more to the American public at that time.

Coming back to developing nations, where people prefer voting on narratives built on religion, nationalism, ethnicity, and perhaps on dynastic politics. South Asian politics in particular has been based on each of these elements.

The most popular narrative in both India and Pakistan is the exposé of anti-state elements in each other’s countries. The projection of the other state as the enemy is extremely important to winning popular votes. Any positivity shown by either side is immediately exploited by the respective opposition and may cost heavily in the elections even if it was done in good faith.

Likewise, the exploitation of religious sentiments also figures prominently in the subcontinent. India’s ruling Bharatiya Janata Party (BJP) led by Prime Minister Narendra Modi is in power since 2014, promoting its Hindutva philosophy, which has nearly diminished India’s secular image. The country has seen massive human rights abuses and anti-religious riots during his tenure. However, atrocities committed against minorities in India do not receive any attention in international media, primarily because the country has won the charm of global actors for standing against China and nuclear Pakistan. Moreover, as mentioned earlier, issues on foreign lands do not really bother those in the developed West except a handful who may hold a few demonstrations or publish a piece condemning Indian atrocities in Illegally Indian Occupied Jammu and Kashmir (IIOJK), and elsewhere in India against the religious minorities.

Here in Pakistan, there is hardly any public policy that is discussed in any election campaign. In fact, I am proposing to replace the concept of “Public Policy” with “Domestic Policy” because it hardly serves the people. Hence, it is necessary to accept the ground reality and come to terms with the norms and practices of Pakistan’s political system, and instead of teaching “Public Policy” in our educational institutions, we should teach domestic politics based on domestic political considerations and compulsions. This change may help our youth, who are the future of our country, understand the mechanics of policy formulation framework, processes, and the logic behind national decision-making. More so, this may help us in understanding the causes and effects of shelving project(s) of public interest by each new successive government. The latter should not be taken merely as a cynical remark because it is a very serious flaw in our system and needs to be changed so that policies are envisioned and made differently especially if we want our future generations to be politically aware and become an inclusive part of the domestic policy formulation process.