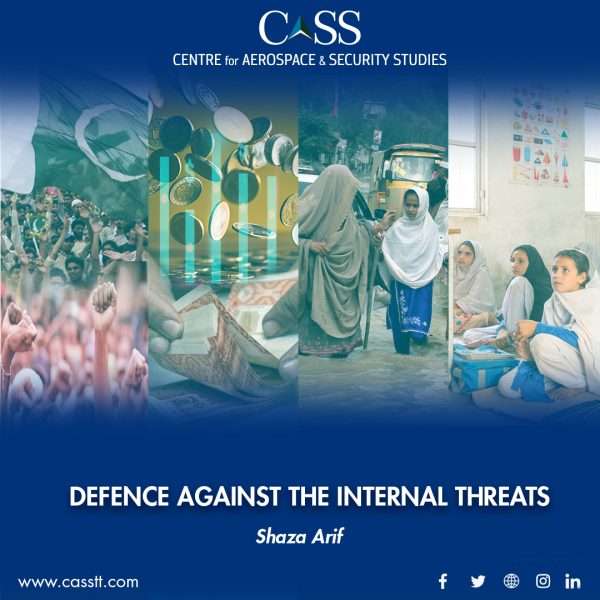 Defence day which is celebrated on 6th September, holds immense importance for Pakistani citizens. It is celebrated with full enthusiasm across the state, noting its historical significance. The day marks an important episode in the history of South Asia when the Pakistani armed forces, particularly the Pakistan Air Force (PAF) proved their mettle against a numerically superior Indian Air Force (IAF) during the Indo-Pak war of 1965. The event made it fairly evident that that one can outfight numerical strength with better leadership, training, tactics, and strategy.

The event’s legacy has continued; until now, our forces have shown their competence to defend the homeland from threats – be it the spread of terrorism after the commencement of the US War on Terror or Indian misadventures in Balakot, 2019. It has been proven over time that our armed forces very well know how to defend the homeland from external threats. However, it is equally important to pay attention to challenges emanating from within and threatening us as a nation.

It is high time to realise, assess and implement the concept of “defence” in a broader manner. The nature of challenges confronted by the state have evolved over time, so should be the means to address them effectively. While external threats will always hover over us, there is an even greater need to pay attention to the internal problems acting like parasites to our well-being.

Today, Pakistan faces a wide array of internal challenges. Some of them are political/social polarization, unstable economy, lack of education, weak policy-making, and ineffective implementation, etc. They remain a pressing challenge, adversely affecting millions of people’s lives and impeding our progress as a nation.

The most recent example in this regard is the menace of climate change, which has caused floods resulting in large-scale devastation across the state. The event illustrates how critical the threat from climate change is and how crucial it is to invest in this regard accordingly. Approximately 30 million citizens have been affected by the floods. Nearly a thousand people have lost their lives in a few days, and hundreds have been rendered homeless by nature’s fury.

The floods are not in isolation, and the displacement of such a large group of people is not the only concern; instead, the problems are multi-faceted. The damage to the infrastructure is significant, and it will take years to rebuild the lost property. The immense flooding has inflicted damage to the agricultural sector. Even worst, it has disrupted the supply chain routes and processes. This is likely to result in a shortage of commodities in the market and, ultimately, a spike of the prices. Furthermore, the spread of viral diseases is considerably more rapid in flood-afflicted areas. Unfortunately, the affected part of the state is already underdeveloped, which makes the impact more pronounced and long-lasting in those areas.

Hence, this event indicates the vulnerability of the citizens to such disasters. As always, the nation has responded open-heartedly to charities throughout the country, but this is not the permanent solution. It needs due attention from the concerned policymakers to find sustainable solutions against such threats. Defending ourselves from internal threats must be our key priority, both in individual and collective capacities. Undoubtedly, it is easier said than done, given that it will take considerable effort, time, resources, and relentless will to overcome these challenges. Nevertheless, it is our individual obligation to stir and encourage discussions around these aspects with a hope that the efforts will bear fruit in the longer run.

In the technological age, when nations are reaching space, it is extremely painful to watch the disturbing images of the devastation caused by the floods in our beloved homeland. Events like these should be a reminder as to where we are heading. This defence day will certainly be different, given that the nation is mourning the plight of the flood-afflicted fellow citizens. However, as we observe it, we should be mindful that Pakistan will not be able to reach its true potential until we defend it in an optimal manner. Our borders are strong, and our forces will continue to make them stronger, but defence from external threats is not enough. Pakistan is confronted with numerous internal challenges that must be addressed on a priority basis. In a similar manner, as Pakistan outdid a larger military with fewer resources in 1965, we need to revamp our effort to defend against the internal threats despite the existing challenges.

Shaza Arif is a Researcher at the Centre for Aerospace & Security Studies (CASS), Islamabad, Pakistan. The article was first published in Pakistan Observer. She can be reached at cass.thinkers@gmail.com