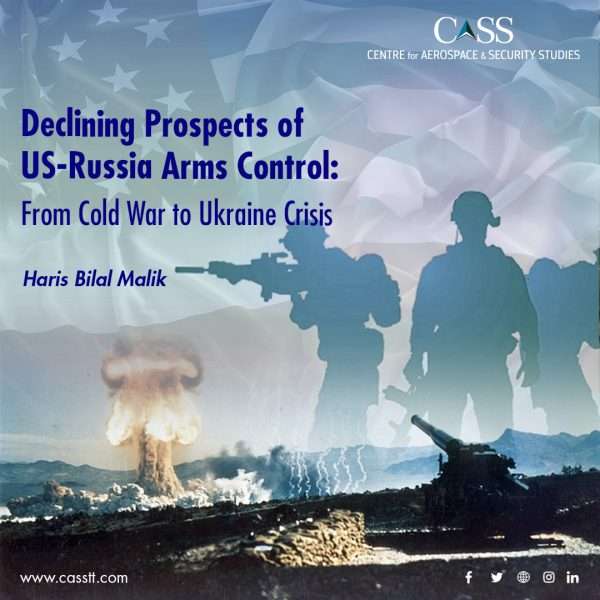 The United States (US) and Russia are the two largest nuclear weapon states possessing 90% of the world’s nuclear arsenal. During the Cold War, despite being hostile toward each other, both superpowers made significant efforts for bilateral arms control. This ultimately led to arms control agreements like the 1972 Anti-Ballistic Missile (ABM) Treaty, the 1987 Intermediate-Range Nuclear Forces (INF) Treaty, and the 1991 Strategic Arms Reduction Treaty I (START-I). These arms limitation agreements remained enforced during the Cold War and even afterward. But then, in subsequent years, the changing international security environment and strategic interests of both countries led to the end of these arms control agreements. Even now, given the more complex dynamics of international security and great power contestation, specifically against the backdrop of the ongoing Russia-Ukraine war, the prospects of a broader US-Russia arms control mechanism have significantly declined.

The US unilaterally withdrew from the ABM Treaty in June 2002, citing international security concerns; thus, making the treaty void. Likewise, the INF Treaty met the same fate when in August 2019, the US formally withdrew from it claiming Russia’s non-compliance, followed by Russia doing the same. Notwithstanding this, another significant arms control agreement, the New Strategic Arms Reduction Treaty (New START) came into force in 2011 to limit the number of deployed strategic nuclear warheads. As per treaty obligations, if not extended, it was supposed to expire in February 2021. The debate on its extension remained incessant, especially in 2020. However, all talks ended without any considerable breakthrough against the backdrop of prevailing arms race between the two countries, the US’ emphasis on the inclusion of China in future arms control mechanisms, and advancements in warhead delivery systems. The future of New START became more skeptical and uncertain as it neared expiry. However, in February 2021, the incumbent Biden Administration and Russia agreed to extend New START for another five years till February 2026. The US finally signed on because it maintains that it is committed to effective arms control to enhance global stability. The extension now provides an opportunity to the US to pursue a broader arms control mechanism with Russia, in consultation with its allies and partners, and Congress. Plus, even at that time, Russia was seen as posing challenges to the US and the world. The US also hinted toward bringing China into the arms control mechanism, citing its growing nuclear arsenal. On the other hand, Russia’s rationale behind agreeing to extend the New START was that since both countries are the world’s largest nuclear powers, it is their responsibility to preserve strategic stability based on parity. It further maintained that the US policies towards arms control were destructive and significant efforts would be required towards a stable dialogue in this regard. Even though both the countries tried to justify their positions vis-à-vis the extension of New START, they deliberately criticised each other’s arms control policies. This indicates their considerable lack of mutual trust.

Before the war in Ukraine, the US and Russian leaders met twice in Geneva – first, President Biden and President Putin met on 16 June 2021 where both agreed to re-launch a Strategic Stability Dialogue. Subsequently, on 30th September, there was another round where senior officials from both sides again met and called the meeting ‘intensive and substantive’ but only agreed to form two working groups to convene upcoming meetings and to focus on principles and objectives of future arms control. However, there was no other considerable breakthrough that could guarantee a broader mechanism of arms control.

Then, Russia attacked Ukraine and any prospects of a broader US-Russia arms control arrangement, were axed. For instance, during the initial days of the war, President Putin ordered the Russian nuclear forces to remain at high alert status and termed it a ‘special regime of combat duty’ in response to Western sanctions and statements of NATO leaders. Russia also conducted nuclear-related military and simulated exercises in May and June 2022 to demonstrate its nuclear capabilities.

While there have been statements by President Biden and President Putin in June 2022 for engagement on ‘strategic stability’, it is ‘almost impossible to imagine’ any movement in this direction. Even though the extension of New START was a significant step, without a conducive and peaceful international security environment, consistent lack of trust between the US and Russia due to their geostrategic interests vis-à-vis the conflict in Europe, and deadlocks on expanding the scope of future arms control agreements, prospects of broader arms control arrangements are merely pipe dreams.

Haris Bilal Malik is a researcher at the Centre for Aerospace & Security Studies (CASS), Islamabad, Pakistan. He can be reached at cass.thinkers@gmail.com