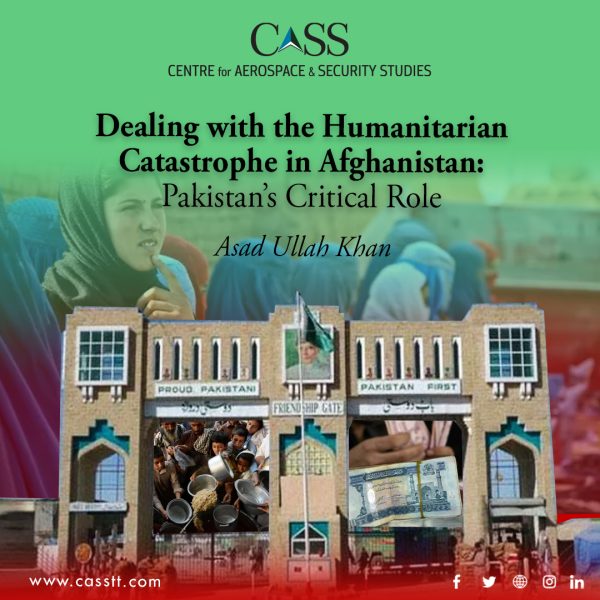 After two decades of its military campaign in Afghanistan, the United States’ withdrawal in August 2021 was followed by an immediate collapse of the American-backed government in Kabul. After the US pullout, the Biden Administration – on the pretext of the Taliban government not fulfilling its promises of an inclusive government, human rights, and terrorism – acted promptly against the new dispensation. While suspending financial assistance to Kabul, Washington and its Western partners imposed severe banking sanctions, freezing billions of Afghanistan’s foreign reserves.

With the end of financial assistance coming from outside during the war, Afghanistan is today on the brink of an economic collapse. The sanctions have exacerbated the crisis, with the country facing a bleak humanitarian situation. With food security among the most serious concern, Afghan society is confronted by serious challenges to public health, employment, and shelter. As per recent UN estimates, ‘two-third of the population’ (more than 28 million people) will need humanitarian assistance. The UN Assistant Secretary-General for humanitarian affairs, Joyce Msuya, recently stated that 20 million people are already in crisis. With no access to foreign funding, the new government in Kabul is seemingly unable to provide even basic life necessities (health, education, electricity) to the Afghan people.

For Afghan people, food scarcity, public health predicament, and unemployment are coupled with surging incidents of violence across the country. The growing economic uncertainty is confounding the security situation already ravaged by war and destruction. The situation has deteriorated to such an extent that people drug their hungry children to help them sleep, parents are selling their daughters to keep families alive, the ratio of malnutrition cases has been increased by 47% this year and people are even selling their kidneys to make ends meet. In addition, the adamancy of the Biden Administration to not release financial reserves, along with the lack of regional consensus to alleviate the plight of the Afghan people, has made matters worse. Despite consistent warnings from the international humanitarian and aid organisations of the economic fallout, the international community has not paid much attention to what seems like an imminent humanitarian collapse for the Afghan society.

The tragic unfolding of such events should be enough for regional and global stakeholders to deal with the crisis immediately. Emergency humanitarian assistance would not be enough to deal with the crisis in a sustainable manner. Though the Taliban government should keep its promises on inclusivity, rights and terrorism, Washington must rethink its policy of financial strangulation that could have more adverse implications. The problems of liquidity could be mitigated by letting the government access banking services, channeling financial aid, and welcoming international investment from regional countries.

In this regard, Pakistan has utilised its platforms on the international stage to direct global attention to the economic meltdown and accompanying humanitarian catastrophe in Afghanistan. Islamabad, on multiple accounts, has urged countries on the UN platform to revive the Afghan economy and provide urgent assistance to the war-torn country. Munir Akram, Pakistan’s Ambassador to the UN, has consistently called for the unfreezing of Afghan assets to address the humanitarian crisis. The Organization of Islamic Cooperation (OIC) is another such platform where Pakistan highlighted the dire consequences of ignoring the humanitarian crisis looming over in the neighboring country. The roadmap presented by Pakistan comprised of efforts to channel international aid, increase foreign investment, allow access to banking services, improve food security, and expand regional trade while curbing illicit trade in narcotics. The framework presented by Pakistan for reviving the Afghan economy, if seen in the backdrop of China’s regional engagement in trade and Pakistan’s genuine effort to promote regional peace and stability, could play a role in averting the looming economic crisis. The Taliban government could seek some financial space by convincing China to help create a financial vehicle for channeling aid, increase investment under the Belt and Road Initiative, and expand trade to landlocked Afghanistan. However, the responsibility of actualising these proposals lies largely on the shoulders of the Afghan government.

The Taliban government needs to ensure a sufficient amount of sociopolitical stability, necessary for foreign investment, trade, and peaceful engagement with the neighbours. Moreover, the ruling dispensation in Kabul should not backtrack from the promises made during the Doha negotiations. An inclusive government, representing political stakeholders from different ethnic and cultural groups, is desirable for peace and stability. In addition, the US, along with other Western countries and international organisations, would have little opposition to unfreezing assets if the Taliban government would protect minority rights, provide education to girls, and allow women empowerment. Hence, the nature of economic catastrophe requires a collective effort from all sides to alleviate the suffering of the Afghan people and improve their livelihoods for the sustainable future of a war-torn country.

Asad Ullah Khan is a Senior Research Associate at the Centre for Aerospace & Security Studies (CASS), Islamabad, Pakistan. The article was first published in Eurasia Review. He can be reached at snr.res.a@casstt.com